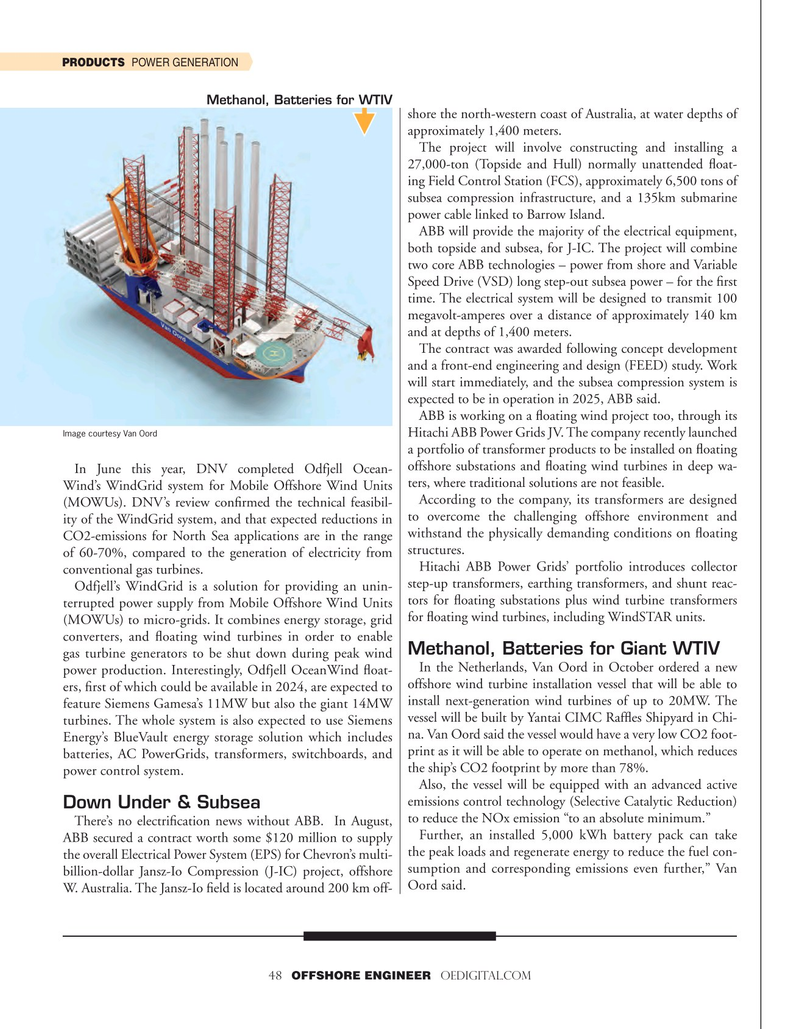 Methanol, Batteries for WTIV shore the north-western coast of Australia, at water depths of approximately 1,400 meters.

ABB will provide the majority of the electrical equipment, both topside and subsea, for J-IC. The project will combine two core ABB technologies – power from shore and Variable

Speed Drive (VSD) long step-out subsea power – for the frst time. The electrical system will be designed to transmit 100 megavolt-amperes over a distance of approximately 140 km and at depths of 1,400 meters.

The contract was awarded following concept development and a front-end engineering and design (FEED) study. Work will start immediately, and the subsea compression system is expected to be in operation in 2025, ABB said.

ABB is working on a foating wind project too, through its

According to the company, its transformers are designed (MOWUs). DNV’s review confrmed the technical feasibil- ity of the WindGrid system, and that expected reductions in to overcome the challenging offshore environment and

CO2-emissions for North Sea applications are in the range withstand the physically demanding conditions on foating of 60-70%, compared to the generation of electricity from structures.

converters, and foating wind turbines in order to enable

Methanol, Batteries for Giant WTIV gas turbine generators to be shut down during peak wind

In the Netherlands, Van Oord in October ordered a new power production. Interestingly, Odfjell OceanWind foat- ers, frst of which could be available in 2024, are expected to offshore wind turbine installation vessel that will be able to feature Siemens Gamesa’s 11MW but also the giant 14MW install next-generation wind turbines of up to 20MW. The turbines. The whole system is also expected to use Siemens vessel will be built by Yantai CIMC Raffes Shipyard in Chi-

Energy’s BlueVault energy storage solution which includes na. Van Oord said the vessel would have a very low CO2 foot- batteries, AC PowerGrids, transformers, switchboards, and print as it will be able to operate on methanol, which reduces the ship’s CO2 footprint by more than 78%. power control system.

Also, the vessel will be equipped with an advanced active emissions control technology (Selective Catalytic Reduction)

There’s no electrifcation news without ABB. In August, to reduce the NOx emission “to an absolute minimum.”

W. Australia. The Jansz-Io feld is located around 200 km off- 48 OFFSHORE ENGINEER OEDIGITAL.COM