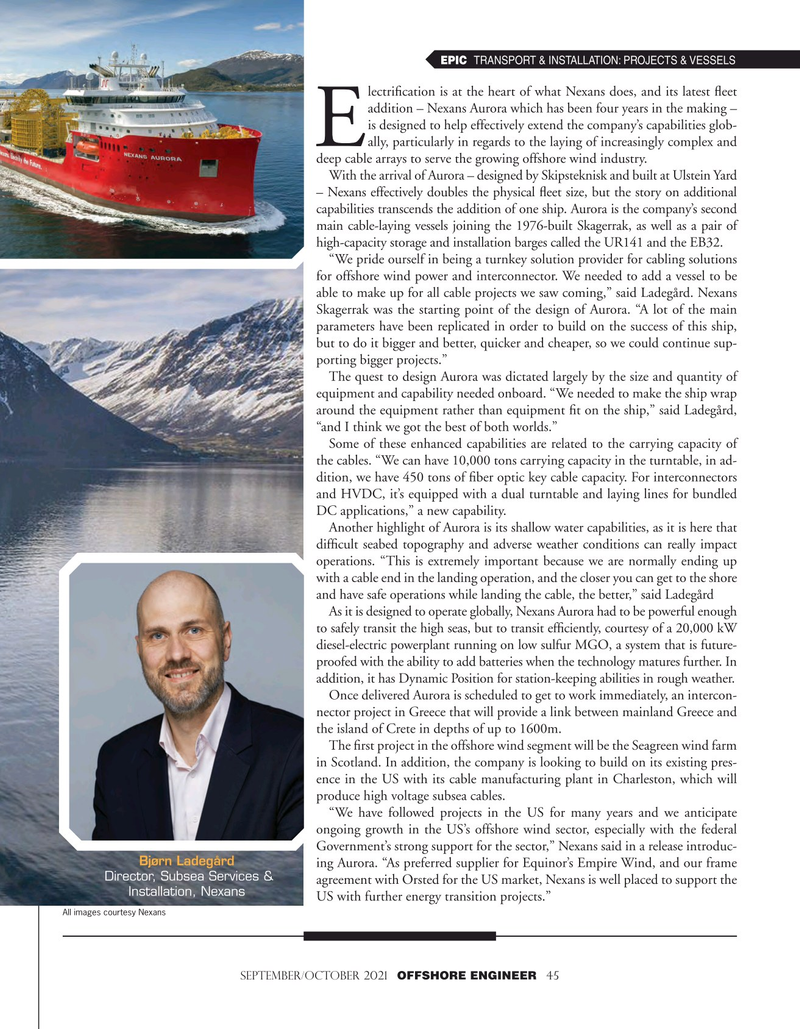 EPIC TRANSPORT & INSTALLATION: PROJECTS & VESSELS lectrifcation is at the heart of what Nexans does, and its latest feet addition – Nexans Aurora which has been four years in the making – is designed to help effectively extend the company’s capabilities glob-

E ally, particularly in regards to the laying of increasingly complex and deep cable arrays to serve the growing offshore wind industry.

With the arrival of Aurora – designed by Skipsteknisk and built at Ulstein Yard – Nexans effectively doubles the physical feet size, but the story on additional capabilities transcends the addition of one ship. Aurora is the company’s second main cable-laying vessels joining the 1976-built Skagerrak, as well as a pair of high-capacity storage and installation barges called the UR141 and the EB32.

“We pride ourself in being a turnkey solution provider for cabling solutions for offshore wind power and interconnector. We needed to add a vessel to be able to make up for all cable projects we saw coming,” said Ladegård. Nexans

Skagerrak was the starting point of the design of Aurora. “A lot of the main parameters have been replicated in order to build on the success of this ship, but to do it bigger and better, quicker and cheaper, so we could continue sup- porting bigger projects.”

The quest to design Aurora was dictated largely by the size and quantity of equipment and capability needed onboard. “We needed to make the ship wrap around the equipment rather than equipment ft on the ship,” said Ladegård, “and I think we got the best of both worlds.”

Some of these enhanced capabilities are related to the carrying capacity of the cables. “We can have 10,000 tons carrying capacity in the turntable, in ad- dition, we have 450 tons of fber optic key cable capacity. For interconnectors and HVDC, it’s equipped with a dual turntable and laying lines for bundled

Another highlight of Aurora is its shallow water capabilities, as it is here that diffcult seabed topography and adverse weather conditions can really impact operations. “This is extremely important because we are normally ending up with a cable end in the landing operation, and the closer you can get to the shore and have safe operations while landing the cable, the better,” said Ladegård

As it is designed to operate globally, Nexans Aurora had to be powerful enough to safely transit the high seas, but to transit effciently, courtesy of a 20,000 kW diesel-electric powerplant running on low sulfur MGO, a system that is future- proofed with the ability to add batteries when the technology matures further. In addition, it has Dynamic Position for station-keeping abilities in rough weather.

Once delivered Aurora is scheduled to get to work immediately, an intercon- nector project in Greece that will provide a link between mainland Greece and the island of Crete in depths of up to 1600m.

The frst project in the offshore wind segment will be the Seagreen wind farm in Scotland. In addition, the company is looking to build on its existing pres- ence in the US with its cable manufacturing plant in Charleston, which will produce high voltage subsea cables.

“We have followed projects in the US for many years and we anticipate ongoing growth in the US’s offshore wind sector, especially with the federal

Government’s strong support for the sector,” Nexans said in a release introduc-

Bjørn Ladegård ing Aurora. “As preferred supplier for Equinor’s Empire Wind, and our frame Director, Subsea Services & agreement with Orsted for the US market, Nexans is well placed to support the

US with further energy transition projects.”