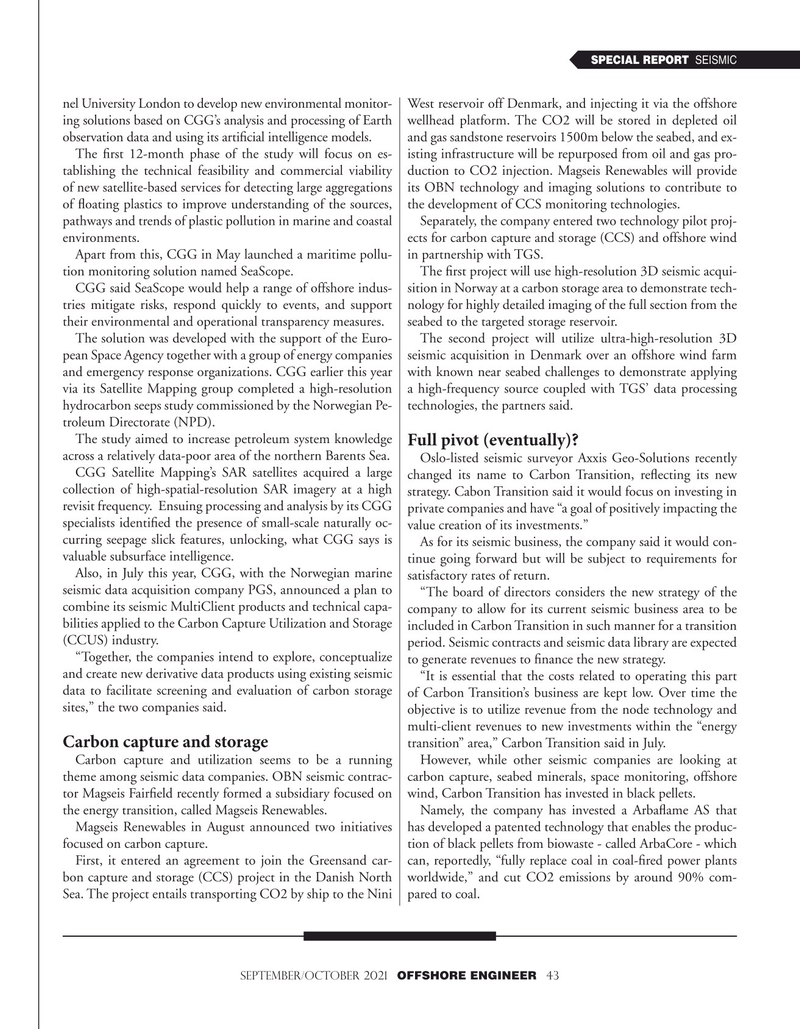 SPECIAL REPORT SEISMIC nel University London to develop new environmental monitor- West reservoir off Denmark, and injecting it via the offshore ing solutions based on CGG’s analysis and processing of Earth wellhead platform. The CO2 will be stored in depleted oil observation data and using its artifcial intelligence models. and gas sandstone reservoirs 1500m below the seabed, and ex-

The frst 12-month phase of the study will focus on es- isting infrastructure will be repurposed from oil and gas pro- tablishing the technical feasibility and commercial viability duction to CO2 injection. Magseis Renewables will provide of new satellite-based services for detecting large aggregations its OBN technology and imaging solutions to contribute to of foating plastics to improve understanding of the sources, the development of CCS monitoring technologies.

Apart from this, CGG in May launched a maritime pollu- in partnership with TGS. tion monitoring solution named SeaScope. The frst project will use high-resolution 3D seismic acqui-

CGG said SeaScope would help a range of offshore indus- sition in Norway at a carbon storage area to demonstrate tech- tries mitigate risks, respond quickly to events, and support nology for highly detailed imaging of the full section from the their environmental and operational transparency measures. seabed to the targeted storage reservoir.

The solution was developed with the support of the Euro- The second project will utilize ultra-high-resolution 3D pean Space Agency together with a group of energy companies seismic acquisition in Denmark over an offshore wind farm and emergency response organizations. CGG earlier this year with known near seabed challenges to demonstrate applying via its Satellite Mapping group completed a high-resolution a high-frequency source coupled with TGS’ data processing hydrocarbon seeps study commissioned by the Norwegian Pe- technologies, the partners said.

across a relatively data-poor area of the northern Barents Sea.

CGG Satellite Mapping’s SAR satellites acquired a large changed its name to Carbon Transition, refecting its new collection of high-spatial-resolution SAR imagery at a high strategy. Cabon Transition said it would focus on investing in revisit frequency. Ensuing processing and analysis by its CGG private companies and have “a goal of positively impacting the specialists identifed the presence of small-scale naturally oc- value creation of its investments.” curring seepage slick features, unlocking, what CGG says is

As for its seismic business, the company said it would con- valuable subsurface intelligence.

tinue going forward but will be subject to requirements for

Also, in July this year, CGG, with the Norwegian marine satisfactory rates of return.

seismic data acquisition company PGS, announced a plan to “The board of directors considers the new strategy of the combine its seismic MultiClient products and technical capa- company to allow for its current seismic business area to be bilities applied to the Carbon Capture Utilization and Storage included in Carbon Transition in such manner for a transition (CCUS) industry.

period. Seismic contracts and seismic data library are expected “Together, the companies intend to explore, conceptualize to generate revenues to fnance the new strategy. and create new derivative data products using existing seismic “It is essential that the costs related to operating this part data to facilitate screening and evaluation of carbon storage of Carbon Transition’s business are kept low. Over time the sites,” the two companies said.

objective is to utilize revenue from the node technology and multi-client revenues to new investments within the “energy transition” area,” Carbon Transition said in July.

the energy transition, called Magseis Renewables. Namely, the company has invested a Arbafame AS that

Magseis Renewables in August announced two initiatives has developed a patented technology that enables the produc- focused on carbon capture. tion of black pellets from biowaste - called ArbaCore - which

First, it entered an agreement to join the Greensand car- can, reportedly, “fully replace coal in coal-fred power plants bon capture and storage (CCS) project in the Danish North worldwide,” and cut CO2 emissions by around 90% com-

Sea. The project entails transporting CO2 by ship to the Nini pared to coal.