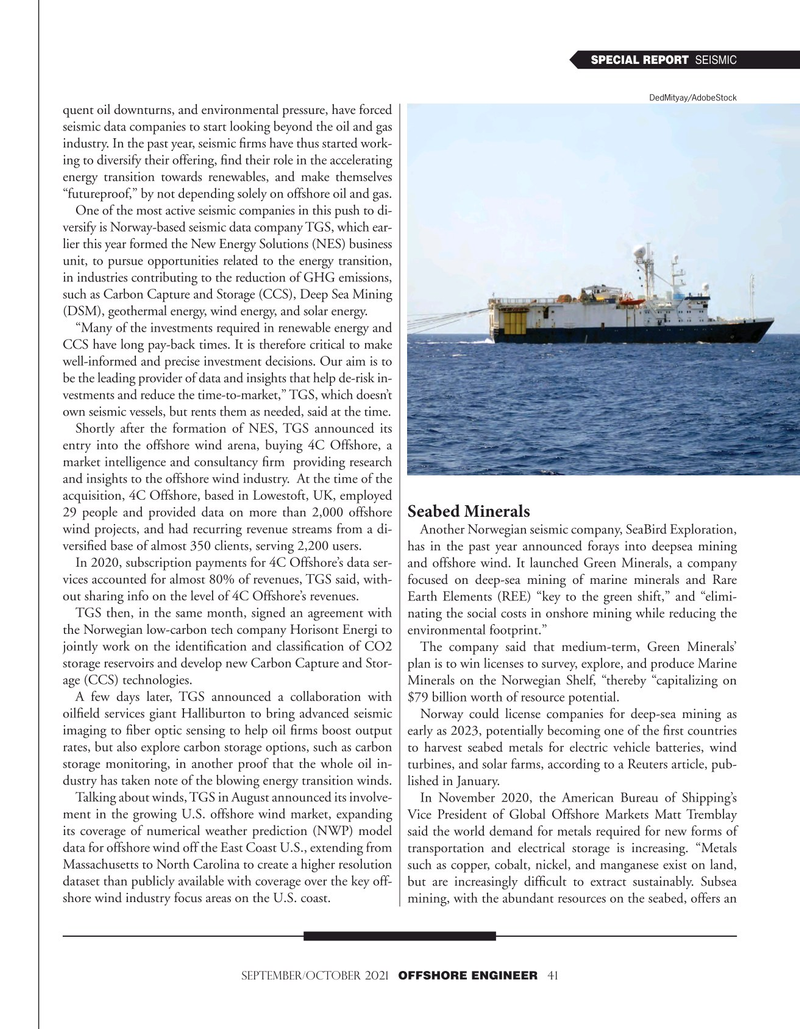 DedMityay/AdobeStock quent oil downturns, and environmental pressure, have forced seismic data companies to start looking beyond the oil and gas industry. In the past year, seismic frms have thus started work- ing to diversify their offering, fnd their role in the accelerating energy transition towards renewables, and make themselves “futureproof,” by not depending solely on offshore oil and gas.

One of the most active seismic companies in this push to di- versify is Norway-based seismic data company TGS, which ear- lier this year formed the New Energy Solutions (NES) business unit, to pursue opportunities related to the energy transition, in industries contributing to the reduction of GHG emissions, such as Carbon Capture and Storage (CCS), Deep Sea Mining (DSM), geothermal energy, wind energy, and solar energy.

“Many of the investments required in renewable energy and

CCS have long pay-back times. It is therefore critical to make well-informed and precise investment decisions. Our aim is to be the leading provider of data and insights that help de-risk in- vestments and reduce the time-to-market,” TGS, which doesn’t own seismic vessels, but rents them as needed, said at the time.

Seabed Minerals wind projects, and had recurring revenue streams from a di- Another Norwegian seismic company, SeaBird Exploration, versifed base of almost 350 clients, serving 2,200 users. has in the past year announced forays into deepsea mining

In 2020, subscription payments for 4C Offshore’s data ser- and offshore wind. It launched Green Minerals, a company vices accounted for almost 80% of revenues, TGS said, with- focused on deep-sea mining of marine minerals and Rare out sharing info on the level of 4C Offshore’s revenues. Earth Elements (REE) “key to the green shift,” and “elimi-

TGS then, in the same month, signed an agreement with nating the social costs in onshore mining while reducing the the Norwegian low-carbon tech company Horisont Energi to environmental footprint.” jointly work on the identifcation and classifcation of CO2 The company said that medium-term, Green Minerals’ storage reservoirs and develop new Carbon Capture and Stor- plan is to win licenses to survey, explore, and produce Marine age (CCS) technologies. Minerals on the Norwegian Shelf, “thereby “capitalizing on

A few days later, TGS announced a collaboration with $79 billion worth of resource potential.

oilfeld services giant Halliburton to bring advanced seismic Norway could license companies for deep-sea mining as imaging to fber optic sensing to help oil frms boost output early as 2023, potentially becoming one of the frst countries rates, but also explore carbon storage options, such as carbon to harvest seabed metals for electric vehicle batteries, wind storage monitoring, in another proof that the whole oil in- turbines, and solar farms, according to a Reuters article, pub- dustry has taken note of the blowing energy transition winds. lished in January.

Talking about winds, TGS in August announced its involve- In November 2020, the American Bureau of Shipping’s ment in the growing U.S. offshore wind market, expanding Vice President of Global Offshore Markets Matt Tremblay its coverage of numerical weather prediction (NWP) model said the world demand for metals required for new forms of data for offshore wind off the East Coast U.S., extending from transportation and electrical storage is increasing. “Metals

Massachusetts to North Carolina to create a higher resolution such as copper, cobalt, nickel, and manganese exist on land, dataset than publicly available with coverage over the key off- but are increasingly diffcult to extract sustainably. Subsea shore wind industry focus areas on the U.S. coast. mining, with the abundant resources on the seabed, offers an september/october 2021 OFFSHORE ENGINEER 41