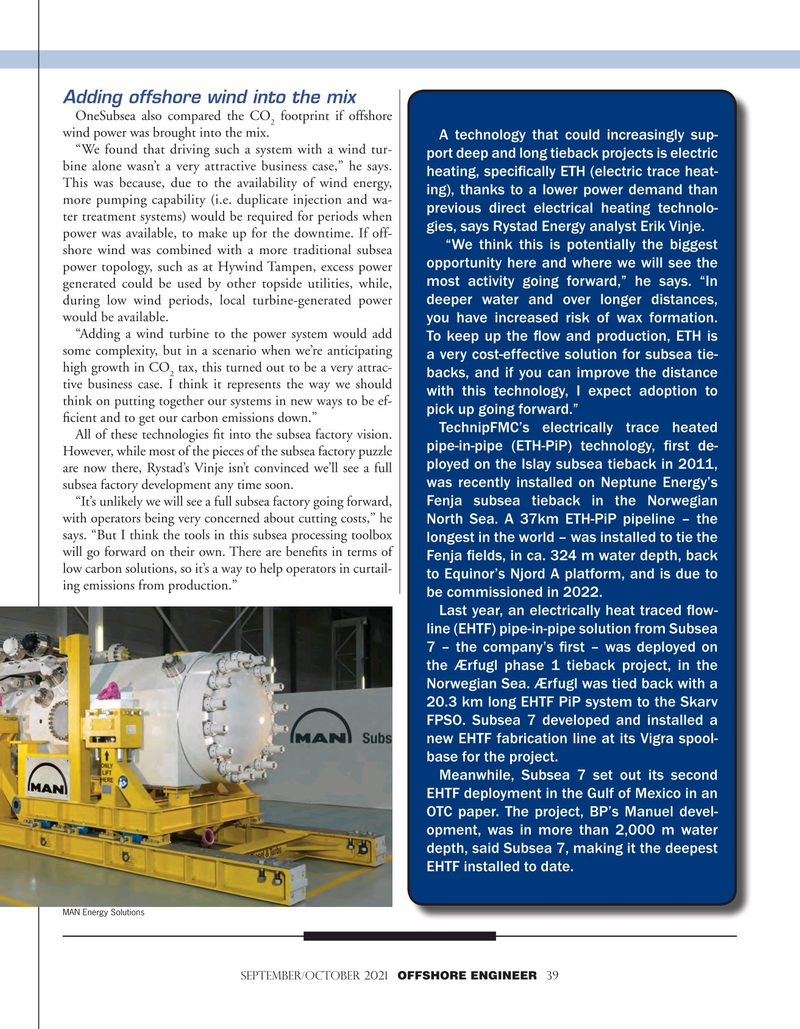 Adding offshore wind into the mix

OneSubsea also compared the CO footprint if offshore 2 wind power was brought into the mix.

A technology that could increasingly sup- “We found that driving such a system with a wind tur- port deep and long tieback projects is electric bine alone wasn’t a very attractive business case,” he says. heating, specifcally ETH (electric trace heat-

This was because, due to the availability of wind energy, ing), thanks to a lower power demand than more pumping capability (i.e. duplicate injection and wa- previous direct electrical heating technolo- ter treatment systems) would be required for periods when gies, says Rystad Energy analyst Erik Vinje.

power was available, to make up for the downtime. If off- “We think this is potentially the biggest shore wind was combined with a more traditional subsea opportunity here and where we will see the power topology, such as at Hywind Tampen, excess power most activity going forward,” he says. “In generated could be used by other topside utilities, while, deeper water and over longer distances, during low wind periods, local turbine-generated power would be available. you have increased risk of wax formation. “Adding a wind turbine to the power system would add

To keep up the fow and production, ETH is some complexity, but in a scenario when we’re anticipating a very cost-effective solution for subsea tie- high growth in CO tax, this turned out to be a very attrac- 2 backs, and if you can improve the distance tive business case. I think it represents the way we should with this technology, I expect adoption to think on putting together our systems in new ways to be ef- pick up going forward.” fcient and to get our carbon emissions down.”

All of these technologies ft into the subsea factory vision. pipe-in-pipe (ETH-PiP) technology, frst de-

However, while most of the pieces of the subsea factory puzzle ployed on the Islay subsea tieback in 2011, are now there, Rystad’s Vinje isn’t convinced we’ll see a full was recently installed on Neptune Energy’s subsea factory development any time soon.

Fenja subsea tieback in the Norwegian “It’s unlikely we will see a full subsea factory going forward, with operators being very concerned about cutting costs,” he

North Sea. A 37km ETH-PiP pipeline – the says. “But I think the tools in this subsea processing toolbox longest in the world – was installed to tie the will go forward on their own. There are benefts in terms of

Fenja felds, in ca. 324 m water depth, back low carbon solutions, so it’s a way to help operators in curtail- to Equinor’s Njord A platform, and is due to ing emissions from production.” be commissioned in 2022.

Last year, an electrically heat traced fow- line (EHTF) pipe-in-pipe solution from Subsea 7 – the company’s frst – was deployed on the Ærfugl phase 1 tieback project, in the

Norwegian Sea. Ærfugl was tied back with a 20.3 km long EHTF PiP system to the Skarv

FPSO. Subsea 7 developed and installed a new EHTF fabrication line at its Vigra spool- base for the project.

Meanwhile, Subsea 7 set out its second

EHTF deployment in the Gulf of Mexico in an