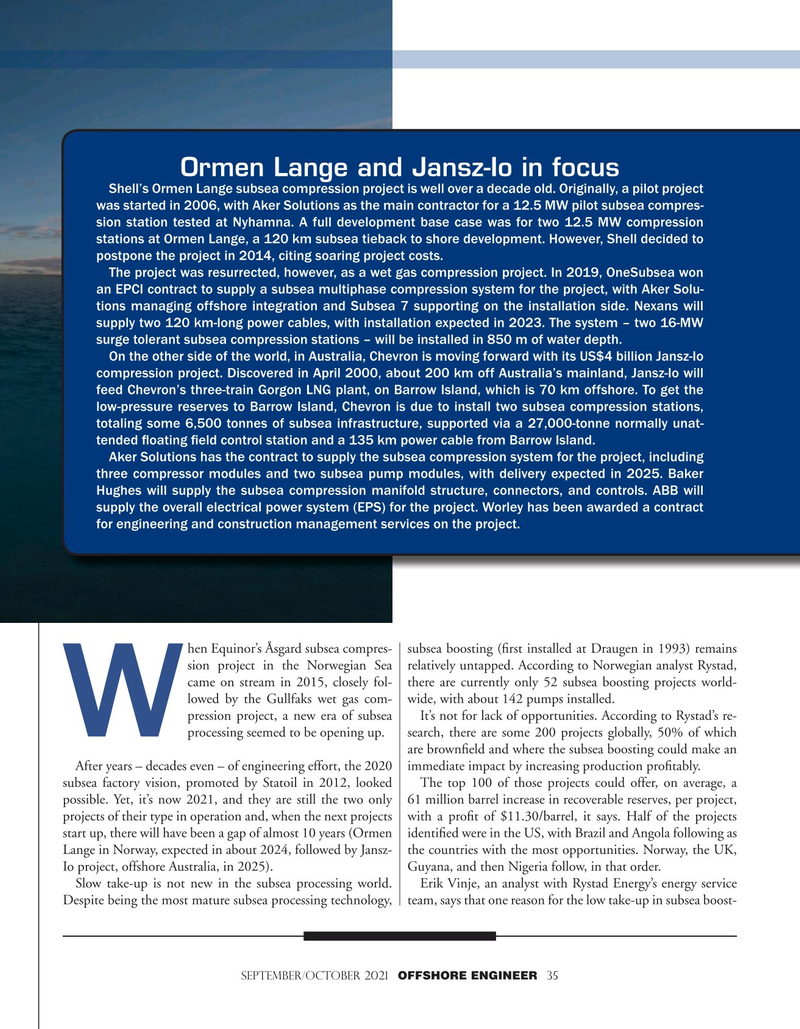 Ormen Lange and Jansz-Io in focus

Shell’s Ormen Lange subsea compression project is well over a decade old. Originally, a pilot project was started in 2006, with Aker Solutions as the main contractor for a 12.5 MW pilot subsea compres- sion station tested at Nyhamna. A full development base case was for two 12.5 MW compression stations at Ormen Lange, a 120 km subsea tieback to shore development. However, Shell decided to postpone the project in 2014, citing soaring project costs.

The project was resurrected, however, as a wet gas compression project. In 2019, OneSubsea won an EPCI contract to supply a subsea multiphase compression system for the project, with Aker Solu- tions managing offshore integration and Subsea 7 supporting on the installation side. Nexans will supply two 120 km-long power cables, with installation expected in 2023. The system – two 16-MW surge tolerant subsea compression stations – will be installed in 850 m of water depth.

On the other side of the world, in Australia, Chevron is moving forward with its US$4 billion Jansz-Io compression project. Discovered in April 2000, about 200 km off Australia’s mainland, Jansz-Io will feed Chevron’s three-train Gorgon LNG plant, on Barrow Island, which is 70 km offshore. To get the low-pressure reserves to Barrow Island, Chevron is due to install two subsea compression stations, totaling some 6,500 tonnes of subsea infrastructure, supported via a 27,000-tonne normally unat- tended foating feld control station and a 135 km power cable from Barrow Island.

Aker Solutions has the contract to supply the subsea compression system for the project, including three compressor modules and two subsea pump modules, with delivery expected in 2025. Baker

Hughes will supply the subsea compression manifold structure, connectors, and controls. ABB will supply the overall electrical power system (EPS) for the project. Worley has been awarded a contract for engineering and construction management services on the project. hen Equinor’s Åsgard subsea compres- subsea boosting (frst installed at Draugen in 1993) remains sion project in the Norwegian Sea relatively untapped. According to Norwegian analyst Rystad, came on stream in 2015, closely fol- there are currently only 52 subsea boosting projects world- lowed by the Gullfaks wet gas com- wide, with about 142 pumps installed. pression project, a new era of subsea It’s not for lack of opportunities. According to Rystad’s re- processing seemed to be opening up. search, there are some 200 projects globally, 50% of which

W are brownfeld and where the subsea boosting could make an

After years – decades even – of engineering effort, the 2020 immediate impact by increasing production proftably. subsea factory vision, promoted by Statoil in 2012, looked The top 100 of those projects could offer, on average, a possible. Yet, it’s now 2021, and they are still the two only 61 million barrel increase in recoverable reserves, per project, projects of their type in operation and, when the next projects with a proft of $11.30/barrel, it says. Half of the projects start up, there will have been a gap of almost 10 years (Ormen identifed were in the US, with Brazil and Angola following as

Lange in Norway, expected in about 2024, followed by Jansz- the countries with the most opportunities. Norway, the UK,

Io project, offshore Australia, in 2025). Guyana, and then Nigeria follow, in that order.

Slow take-up is not new in the subsea processing world. Erik Vinje, an analyst with Rystad Energy’s energy service

Despite being the most mature subsea processing technology, team, says that one reason for the low take-up in subsea boost- september/october 2021 OFFSHORE ENGINEER 35