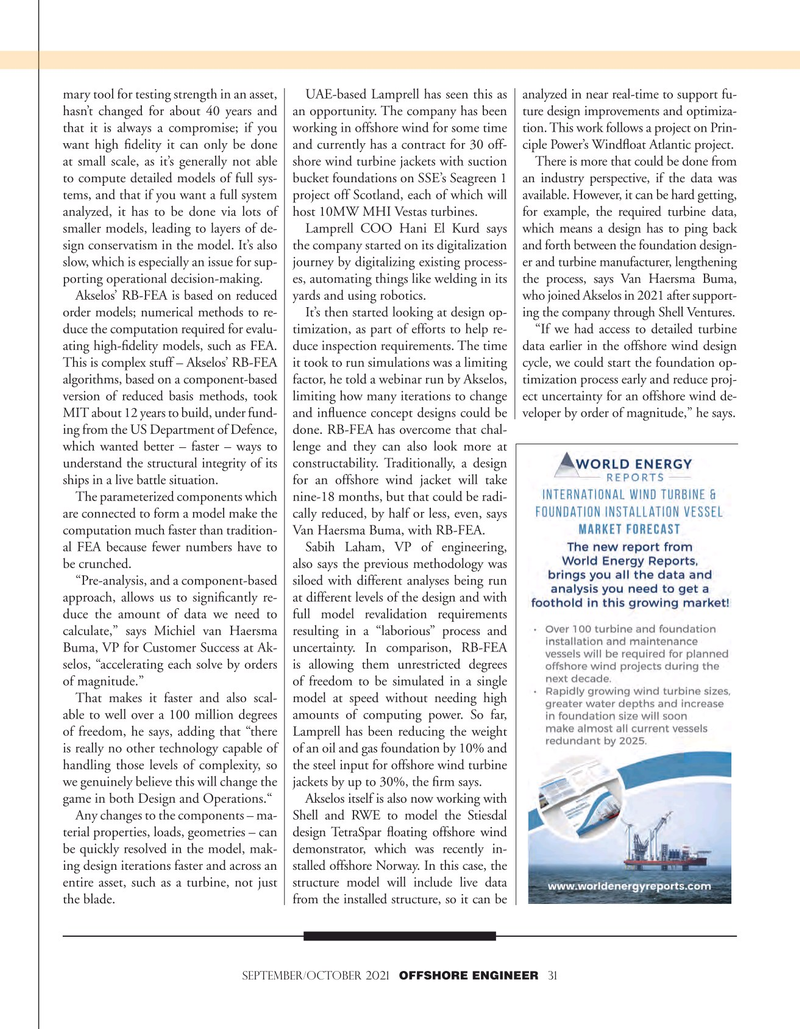 mary tool for testing strength in an asset, UAE-based Lamprell has seen this as analyzed in near real-time to support fu- hasn’t changed for about 40 years and an opportunity. The company has been ture design improvements and optimiza- that it is always a compromise; if you working in offshore wind for some time tion. This work follows a project on Prin- want high fdelity it can only be done and currently has a contract for 30 off- ciple Power’s Windfoat Atlantic project. at small scale, as it’s generally not able shore wind turbine jackets with suction There is more that could be done from to compute detailed models of full sys- bucket foundations on SSE’s Seagreen 1 an industry perspective, if the data was tems, and that if you want a full system project off Scotland, each of which will available. However, it can be hard getting, analyzed, it has to be done via lots of host 10MW MHI Vestas turbines. for example, the required turbine data, smaller models, leading to layers of de- Lamprell COO Hani El Kurd says which means a design has to ping back sign conservatism in the model. It’s also the company started on its digitalization and forth between the foundation design- slow, which is especially an issue for sup- journey by digitalizing existing process- er and turbine manufacturer, lengthening porting operational decision-making. es, automating things like welding in its the process, says Van Haersma Buma,

Akselos’ RB-FEA is based on reduced yards and using robotics. who joined Akselos in 2021 after support- order models; numerical methods to re- It’s then started looking at design op- ing the company through Shell Ventures. duce the computation required for evalu- timization, as part of efforts to help re- “If we had access to detailed turbine ating high-fdelity models, such as FEA. duce inspection requirements. The time data earlier in the offshore wind design

This is complex stuff – Akselos’ RB-FEA it took to run simulations was a limiting cycle, we could start the foundation op- algorithms, based on a component-based factor, he told a webinar run by Akselos, timization process early and reduce proj- version of reduced basis methods, took limiting how many iterations to change ect uncertainty for an offshore wind de-

MIT about 12 years to build, under fund- and infuence concept designs could be veloper by order of magnitude,” he says. ing from the US Department of Defence, done. RB-FEA has overcome that chal- which wanted better – faster – ways to lenge and they can also look more at understand the structural integrity of its constructability. Traditionally, a design ships in a live battle situation. for an offshore wind jacket will take

The parameterized components which nine-18 months, but that could be radi- are connected to form a model make the cally reduced, by half or less, even, says computation much faster than tradition- Van Haersma Buma, with RB-FEA.

al FEA because fewer numbers have to Sabih Laham, VP of engineering, be crunched. also says the previous methodology was “Pre-analysis, and a component-based siloed with different analyses being run approach, allows us to signifcantly re- at different levels of the design and with duce the amount of data we need to full model revalidation requirements calculate,” says Michiel van Haersma resulting in a “laborious” process and

Buma, VP for Customer Success at Ak- uncertainty. In comparison, RB-FEA selos, “accelerating each solve by orders is allowing them unrestricted degrees of magnitude.” of freedom to be simulated in a single

That makes it faster and also scal- model at speed without needing high able to well over a 100 million degrees amounts of computing power. So far, of freedom, he says, adding that “there Lamprell has been reducing the weight is really no other technology capable of of an oil and gas foundation by 10% and handling those levels of complexity, so the steel input for offshore wind turbine we genuinely believe this will change the jackets by up to 30%, the frm says. game in both Design and Operations.“ Akselos itself is also now working with

Any changes to the components – ma- Shell and RWE to model the Stiesdal terial properties, loads, geometries – can design TetraSpar foating offshore wind be quickly resolved in the model, mak- demonstrator, which was recently in- ing design iterations faster and across an stalled offshore Norway. In this case, the entire asset, such as a turbine, not just structure model will include live data the blade. from the installed structure, so it can be september/october 2021 OFFSHORE ENGINEER 31