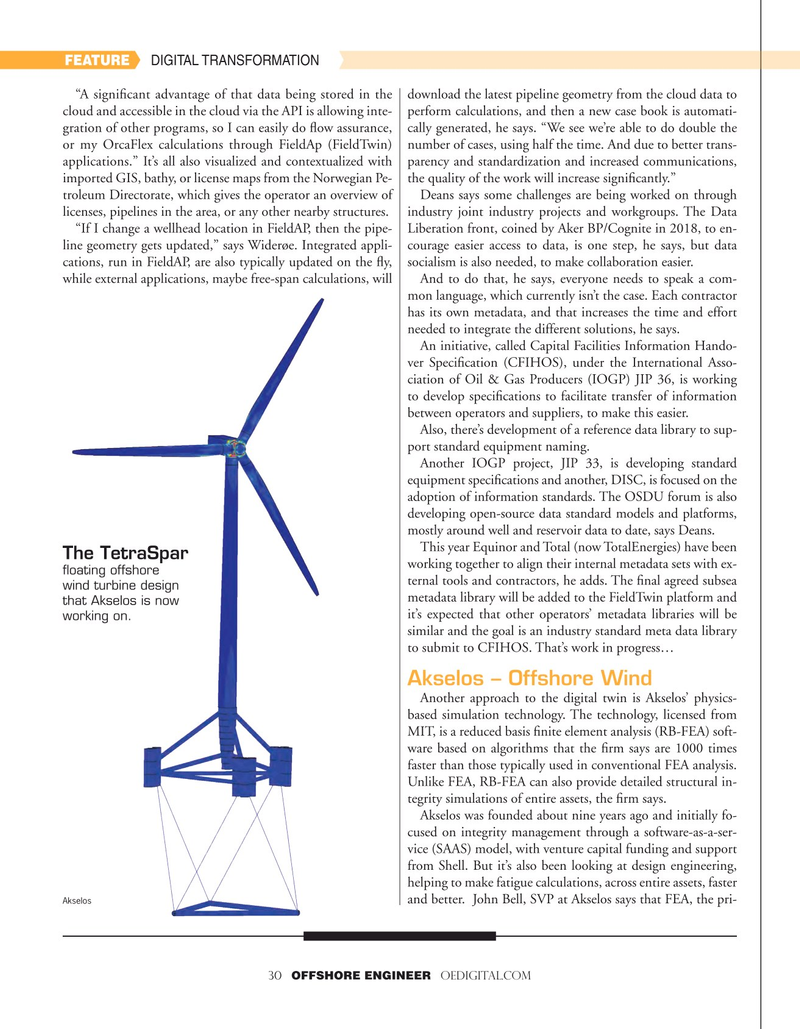 FEATURE DIGITAL TRANSFORMATION “A signifcant advantage of that data being stored in the download the latest pipeline geometry from the cloud data to cloud and accessible in the cloud via the API is allowing inte- perform calculations, and then a new case book is automati- gration of other programs, so I can easily do fow assurance, cally generated, he says. “We see we’re able to do double the or my OrcaFlex calculations through FieldAp (FieldTwin) number of cases, using half the time. And due to better trans- applications.” It’s all also visualized and contextualized with parency and standardization and increased communications, imported GIS, bathy, or license maps from the Norwegian Pe- the quality of the work will increase signifcantly.” troleum Directorate, which gives the operator an overview of Deans says some challenges are being worked on through licenses, pipelines in the area, or any other nearby structures. industry joint industry projects and workgroups. The Data “If I change a wellhead location in FieldAP, then the pipe- Liberation front, coined by Aker BP/Cognite in 2018, to en- line geometry gets updated,” says Widerøe. Integrated appli- courage easier access to data, is one step, he says, but data cations, run in FieldAP, are also typically updated on the fy, socialism is also needed, to make collaboration easier. while external applications, maybe free-span calculations, will And to do that, he says, everyone needs to speak a com- mon language, which currently isn’t the case. Each contractor has its own metadata, and that increases the time and effort needed to integrate the different solutions, he says.

An initiative, called Capital Facilities Information Hando- ver Specifcation (CFIHOS), under the International Asso- ciation of Oil & Gas Producers (IOGP) JIP 36, is working to develop specifcations to facilitate transfer of information between operators and suppliers, to make this easier.

Another IOGP project, JIP 33, is developing standard equipment specifcations and another, DISC, is focused on the adoption of information standards. The OSDU forum is also developing open-source data standard models and platforms, mostly around well and reservoir data to date, says Deans.

This year Equinor and Total (now TotalEnergies) have been

The TetraSpar working together to align their internal metadata sets with ex- floating offshore ternal tools and contractors, he adds. The fnal agreed subsea wind turbine design metadata library will be added to the FieldTwin platform and that Akselos is now it’s expected that other operators’ metadata libraries will be working on. similar and the goal is an industry standard meta data library to submit to CFIHOS. That’s work in progress…

Another approach to the digital twin is Akselos’ physics- based simulation technology. The technology, licensed from

MIT, is a reduced basis fnite element analysis (RB-FEA) soft- ware based on algorithms that the frm says are 1000 times faster than those typically used in conventional FEA analysis.

Akselos was founded about nine years ago and initially fo- cused on integrity management through a software-as-a-ser- vice (SAAS) model, with venture capital funding and support from Shell. But it’s also been looking at design engineering, helping to make fatigue calculations, across entire assets, faster and better. John Bell, SVP at Akselos says that FEA, the pri-