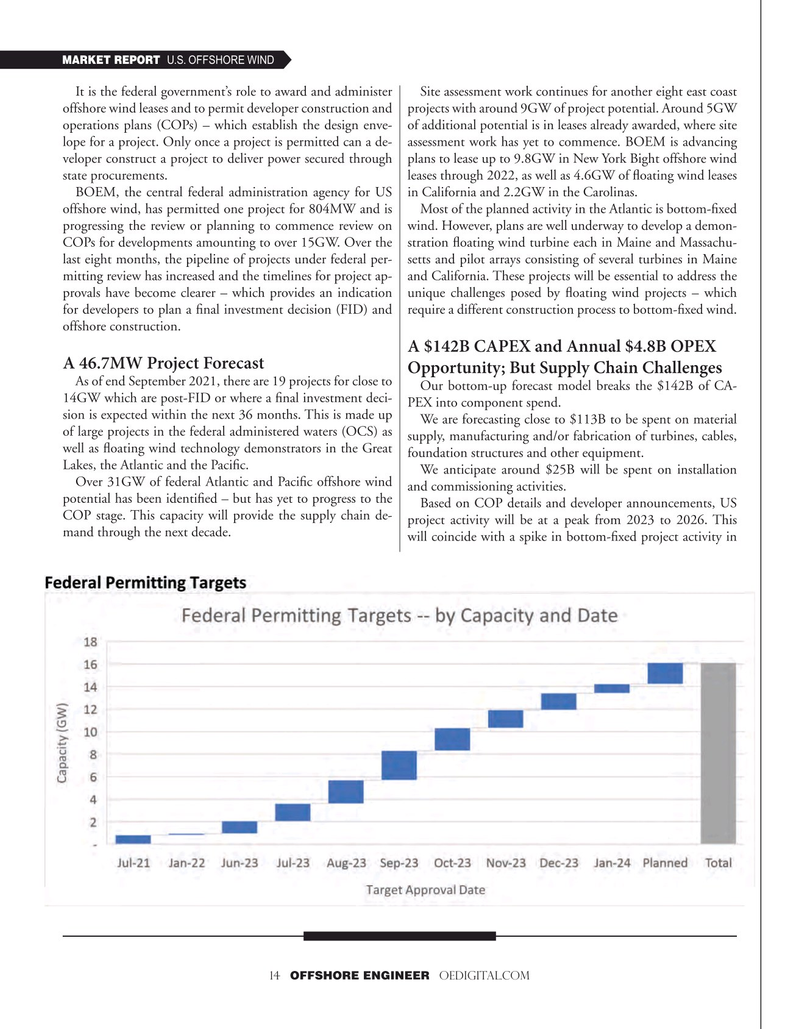 It is the federal government’s role to award and administer Site assessment work continues for another eight east coast offshore wind leases and to permit developer construction and projects with around 9GW of project potential. Around 5GW operations plans (COPs) – which establish the design enve- of additional potential is in leases already awarded, where site lope for a project. Only once a project is permitted can a de- assessment work has yet to commence. BOEM is advancing veloper construct a project to deliver power secured through plans to lease up to 9.8GW in New York Bight offshore wind state procurements. leases through 2022, as well as 4.6GW of foating wind leases

BOEM, the central federal administration agency for US in California and 2.2GW in the Carolinas. offshore wind, has permitted one project for 804MW and is Most of the planned activity in the Atlantic is bottom-fxed progressing the review or planning to commence review on wind. However, plans are well underway to develop a demon-

COPs for developments amounting to over 15GW. Over the stration foating wind turbine each in Maine and Massachu- last eight months, the pipeline of projects under federal per- setts and pilot arrays consisting of several turbines in Maine mitting review has increased and the timelines for project ap- and California. These projects will be essential to address the provals have become clearer – which provides an indication unique challenges posed by foating wind projects – which for developers to plan a fnal investment decision (FID) and require a different construction process to bottom-fxed wind.

As of end September 2021, there are 19 projects for close to

PEX into component spend. sion is expected within the next 36 months. This is made up

We are forecasting close to $113B to be spent on material of large projects in the federal administered waters (OCS) as supply, manufacturing and/or fabrication of turbines, cables, well as foating wind technology demonstrators in the Great foundation structures and other equipment.

Lakes, the Atlantic and the Pacifc.

We anticipate around $25B will be spent on installation

Over 31GW of federal Atlantic and Pacifc offshore wind and commissioning activities. potential has been identifed – but has yet to progress to the

Based on COP details and developer announcements, US

COP stage. This capacity will provide the supply chain de- project activity will be at a peak from 2023 to 2026. This mand through the next decade.

will coincide with a spike in bottom-fxed project activity in 14 OFFSHORE ENGINEER OEDIGITAL.COM