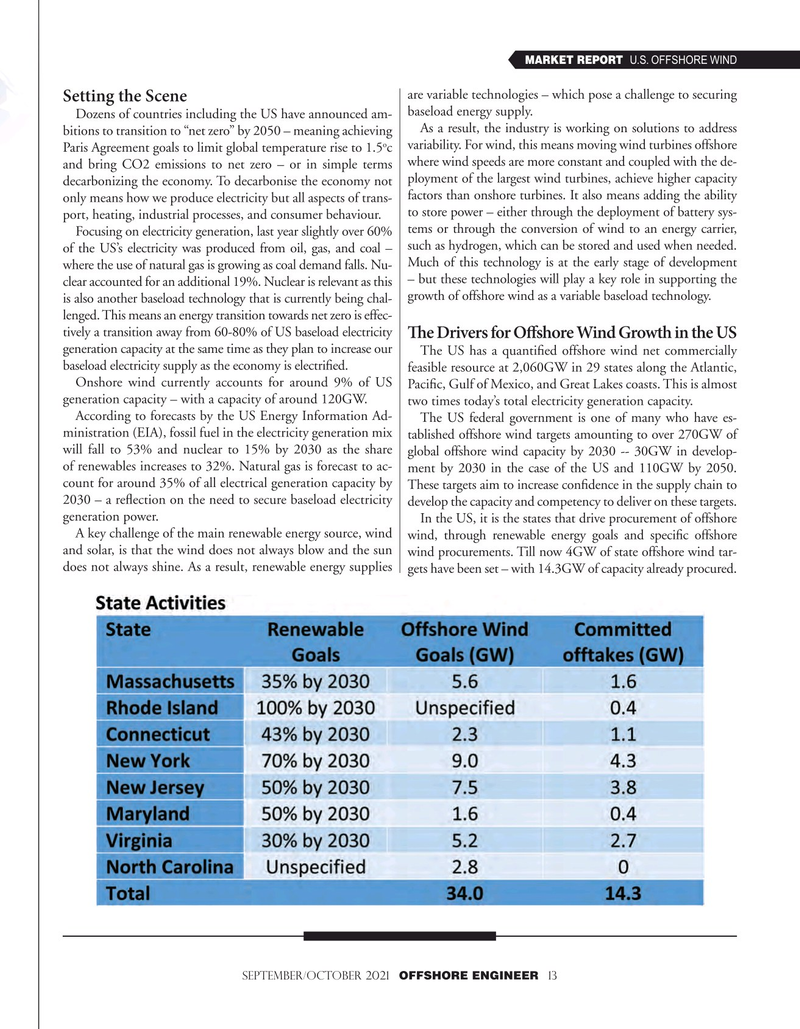 Dozens of countries including the US have announced am-

As a result, the industry is working on solutions to address bitions to transition to “net zero” by 2050 – meaning achieving o

Paris Agreement goals to limit global temperature rise to 1.5 c variability. For wind, this means moving wind turbines offshore and bring CO2 emissions to net zero – or in simple terms where wind speeds are more constant and coupled with the de- decarbonizing the economy. To decarbonise the economy not ployment of the largest wind turbines, achieve higher capacity factors than onshore turbines. It also means adding the ability only means how we produce electricity but all aspects of trans- to store power – either through the deployment of battery sys- port, heating, industrial processes, and consumer behaviour.

Focusing on electricity generation, last year slightly over 60% tems or through the conversion of wind to an energy carrier, of the US’s electricity was produced from oil, gas, and coal – such as hydrogen, which can be stored and used when needed.

Much of this technology is at the early stage of development where the use of natural gas is growing as coal demand falls. Nu- clear accounted for an additional 19%. Nuclear is relevant as this – but these technologies will play a key role in supporting the growth of offshore wind as a variable baseload technology.

is also another baseload technology that is currently being chal- lenged. This means an energy transition towards net zero is effec- tively a transition away from 60-80% of US baseload electricity

The US has a quantifed offshore wind net commercially baseload electricity supply as the economy is electrifed. feasible resource at 2,060GW in 29 states along the Atlantic,

Onshore wind currently accounts for around 9% of US Pacifc, Gulf of Mexico, and Great Lakes coasts. This is almost generation capacity – with a capacity of around 120GW.

According to forecasts by the US Energy Information Ad-

The US federal government is one of many who have es- ministration (EIA), fossil fuel in the electricity generation mix tablished offshore wind targets amounting to over 270GW of will fall to 53% and nuclear to 15% by 2030 as the share global offshore wind capacity by 2030 -- 30GW in develop- of renewables increases to 32%. Natural gas is forecast to ac- ment by 2030 in the case of the US and 110GW by 2050. count for around 35% of all electrical generation capacity by These targets aim to increase confdence in the supply chain to 2030 – a refection on the need to secure baseload electricity develop the capacity and competency to deliver on these targets.

In the US, it is the states that drive procurement of offshore