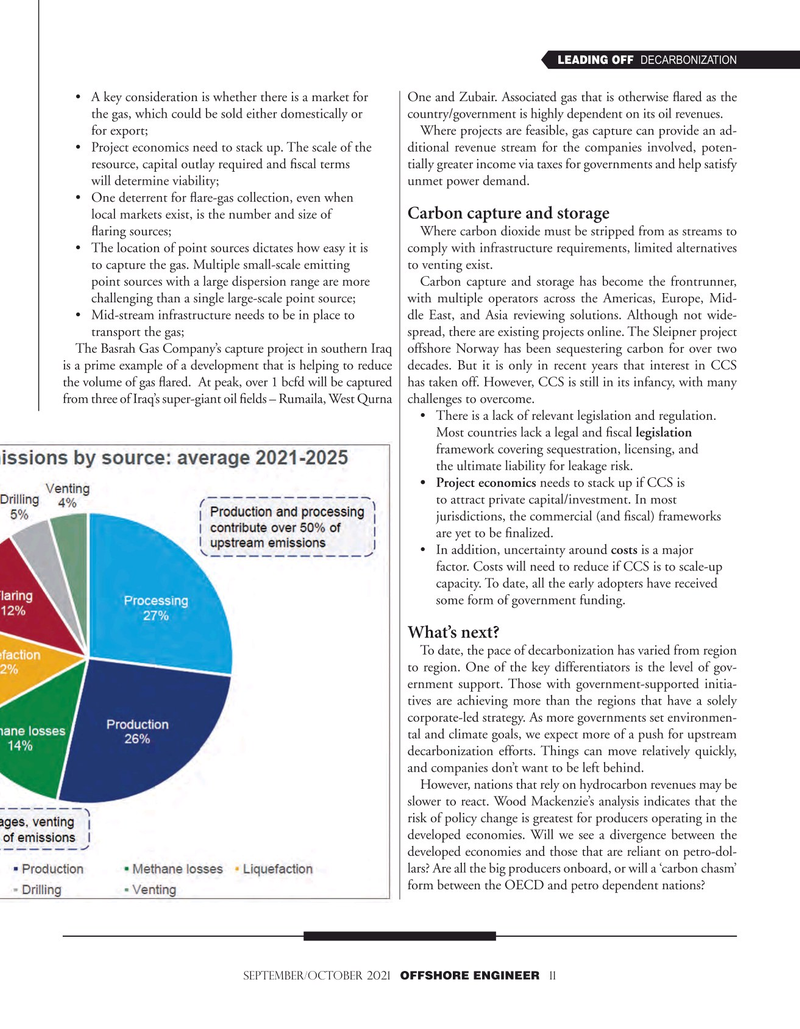 LEADING OFF DECARBONIZATION • A key consideration is whether there is a market for One and Zubair. Associated gas that is otherwise fared as the the gas, which could be sold either domestically or country/government is highly dependent on its oil revenues.

for export; Where projects are feasible, gas capture can provide an ad- • Project economics need to stack up. The scale of the ditional revenue stream for the companies involved, poten- r esource, capital outlay required and fscal terms tially greater income via taxes for governments and help satisfy will determine viability; unmet power demand. • One deterrent for fare-gas collection, even when

Carbon capture and storage local markets exist, is the number and size of faring sources; Where carbon dioxide must be stripped from as streams to • The location of point sources dictates how easy it is comply with infrastructure requirements, limited alternatives to capture the gas. Multiple small-scale emitting to venting exist. point sources with a large dispersion range are more Carbon capture and storage has become the frontrunner, challenging than a single large-scale point source; with multiple operators across the Americas, Europe, Mid- • Mid-stream infrastructure needs to be in place to dle East, and Asia reviewing solutions. Although not wide- transport the gas; spread, there are existing projects online. The Sleipner project

The Basrah Gas Company’s capture project in southern Iraq offshore Norway has been sequestering carbon for over two is a prime example of a development that is helping to reduce decades. But it is only in recent years that interest in CCS the volume of gas fared. At peak, over 1 bcfd will be captured has taken off. However, CCS is still in its infancy, with many from three of Iraq’s super-giant oil felds – Rumaila, West Qurna challenges to overcome.

• There is a lack of relevant legislation and regulation. M ost countries lack a legal and fscal legislation frame work covering sequestration, licensing, and the ultimate liability for leakage risk.

• Project economics needs to stack up if CCS is to attract private capital/investment. In most jurisdictions, the commercial (and fscal) frameworks ar e yet to be fnalized. • In addition, uncertainty around costs is a major factor . Costs will need to reduce if CCS is to scale-up capacity. To date, all the early adopters have received some form of government funding.

To date, the pace of decarbonization has varied from region to region. One of the key differentiators is the level of gov- ernment support. Those with government-supported initia- tives are achieving more than the regions that have a solely corporate-led strategy. As more governments set environmen- tal and climate goals, we expect more of a push for upstream decarbonization efforts. Things can move relatively quickly, and companies don’t want to be left behind.

However, nations that rely on hydrocarbon revenues may be slower to react. Wood Mackenzie’s analysis indicates that the risk of policy change is greatest for producers operating in the developed economies. Will we see a divergence between the developed economies and those that are reliant on petro-dol- lars? Are all the big producers onboard, or will a ‘carbon chasm’ form between the OECD and petro dependent nations?