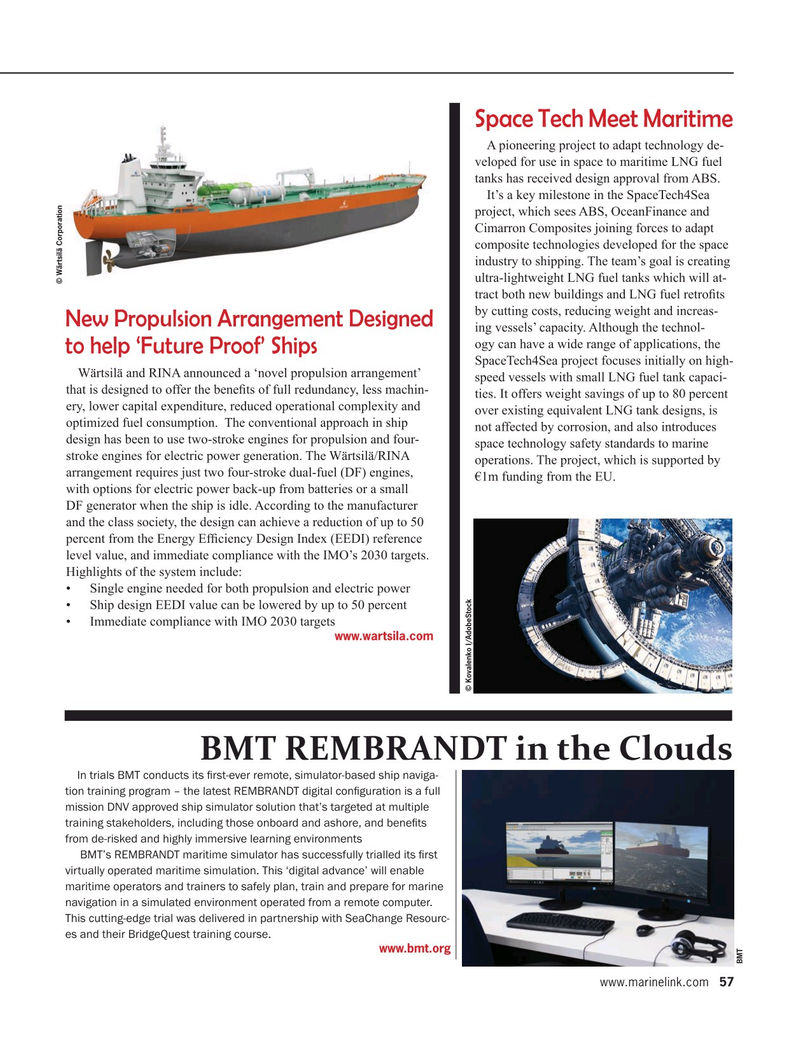 A pioneering project to adapt technology de- veloped for use in space to maritime LNG fuel tanks has received design approval from ABS.

It’s a key milestone in the SpaceTech4Sea project, which sees ABS, OceanFinance and

New Propulsion Arrangement Designed ing vessels’ capacity. Although the technol- ogy can have a wide range of applications, the to help ‘Future Proof’ Ships

Wärtsilä and RINA announced a ‘novel propulsion arrangement’ speed vessels with small LNG fuel tank capaci- that is designed to offer the bene? ts of full redundancy, less machin- ties. It offers weight savings of up to 80 percent ery, lower capital expenditure, reduced operational complexity and over existing equivalent LNG tank designs, is optimized fuel consumption. The conventional approach in ship not affected by corrosion, and also introduces design has been to use two-stroke engines for propulsion and four- space technology safety standards to marine stroke engines for electric power generation. The Wärtsilä/RINA operations. The project, which is supported by arrangement requires just two four-stroke dual-fuel (DF) engines, €1m funding from the EU.

DF generator when the ship is idle. According to the manufacturer and the class society, the design can achieve a reduction of up to 50 percent from the Energy Ef? ciency Design Index (EEDI) reference level value, and immediate compliance with the IMO’s 2030 targets.

Highlights of the system include: • Single engine needed for both propulsion and electric power • Ship design EEDI value can be lowered by up to 50 percent • Immediate compliance with IMO 2030 targets www.wartsila.com © Kovalenko I/AdobeStock

BMT REMBRANDT in the Clouds

This cutting-edge trial was delivered in partnership with SeaChange Resourc- es and their BridgeQuest training course.