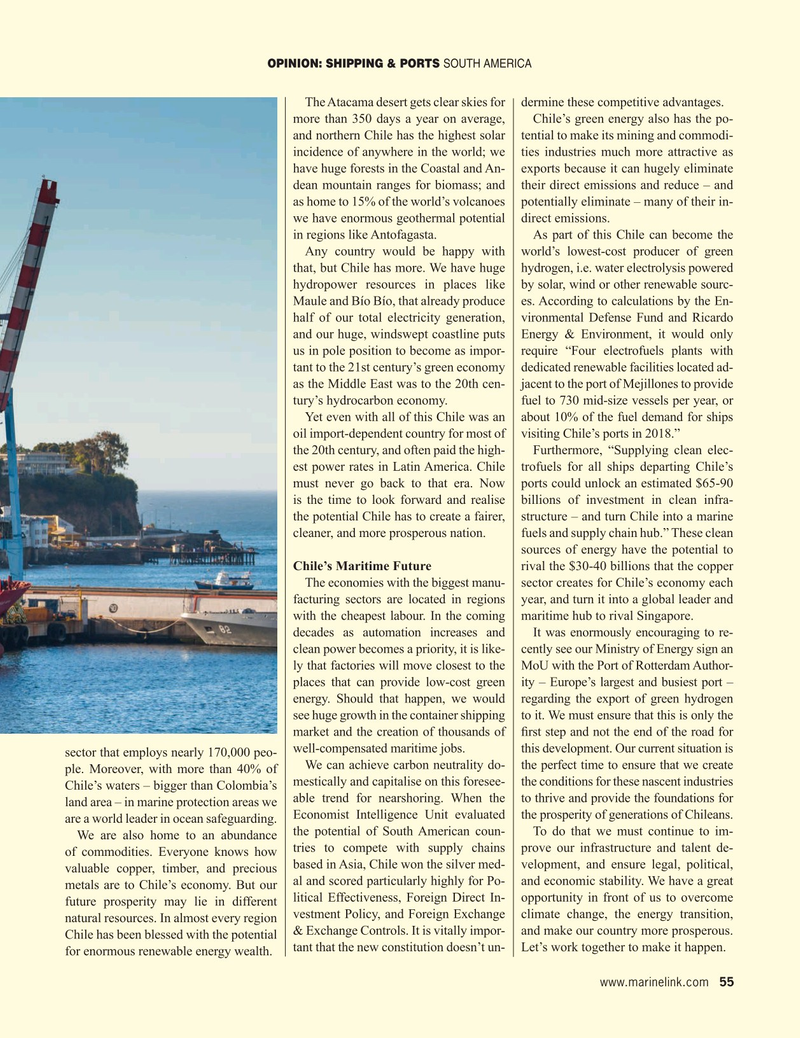 The Atacama desert gets clear skies for dermine these competitive advantages. more than 350 days a year on average, Chile’s green energy also has the po- and northern Chile has the highest solar tential to make its mining and commodi- incidence of anywhere in the world; we ties industries much more attractive as have huge forests in the Coastal and An- exports because it can hugely eliminate dean mountain ranges for biomass; and their direct emissions and reduce – and as home to 15% of the world’s volcanoes potentially eliminate – many of their in- we have enormous geothermal potential direct emissions. in regions like Antofagasta. As part of this Chile can become the

Any country would be happy with world’s lowest-cost producer of green that, but Chile has more. We have huge hydrogen, i.e. water electrolysis powered hydropower resources in places like by solar, wind or other renewable sourc-

Maule and Bío Bío, that already produce es. According to calculations by the En- half of our total electricity generation, vironmental Defense Fund and Ricardo and our huge, windswept coastline puts Energy & Environment, it would only us in pole position to become as impor- require “Four electrofuels plants with tant to the 21st century’s green economy dedicated renewable facilities located ad- as the Middle East was to the 20th cen- jacent to the port of Mejillones to provide tury’s hydrocarbon economy. fuel to 730 mid-size vessels per year, or

Yet even with all of this Chile was an about 10% of the fuel demand for ships oil import-dependent country for most of visiting Chile’s ports in 2018.” the 20th century, and often paid the high- Furthermore, “Supplying clean elec- est power rates in Latin America. Chile trofuels for all ships departing Chile’s must never go back to that era. Now ports could unlock an estimated $65-90 is the time to look forward and realise billions of investment in clean infra- the potential Chile has to create a fairer, structure – and turn Chile into a marine cleaner, and more prosperous nation. fuels and supply chain hub.” These clean sources of energy have the potential to

The economies with the biggest manu- sector creates for Chile’s economy each facturing sectors are located in regions year, and turn it into a global leader and with the cheapest labour. In the coming maritime hub to rival Singapore.

decades as automation increases and It was enormously encouraging to re- clean power becomes a priority, it is like- cently see our Ministry of Energy sign an ly that factories will move closest to the MoU with the Port of Rotterdam Author- places that can provide low-cost green ity – Europe’s largest and busiest port – energy. Should that happen, we would regarding the export of green hydrogen see huge growth in the container shipping to it. We must ensure that this is only the market and the creation of thousands of ? rst step and not the end of the road for well-compensated maritime jobs. this development. Our current situation is sector that employs nearly 170,000 peo-

We can achieve carbon neutrality do- the perfect time to ensure that we create ple. Moreover, with more than 40% of

Chile’s waters – bigger than Colombia’s mestically and capitalise on this foresee- the conditions for these nascent industries able trend for nearshoring. When the to thrive and provide the foundations for land area – in marine protection areas we

Economist Intelligence Unit evaluated the prosperity of generations of Chileans. are a world leader in ocean safeguarding.

We are also home to an abundance the potential of South American coun- To do that we must continue to im- of commodities. Everyone knows how tries to compete with supply chains prove our infrastructure and talent de- valuable copper, timber, and precious based in Asia, Chile won the silver med- velopment, and ensure legal, political, metals are to Chile’s economy. But our al and scored particularly highly for Po- and economic stability. We have a great future prosperity may lie in different litical Effectiveness, Foreign Direct In- opportunity in front of us to overcome vestment Policy, and Foreign Exchange climate change, the energy transition, natural resources. In almost every region & Exchange Controls. It is vitally impor- and make our country more prosperous.

Chile has been blessed with the potential tant that the new constitution doesn’t un- Let’s work together to make it happen.