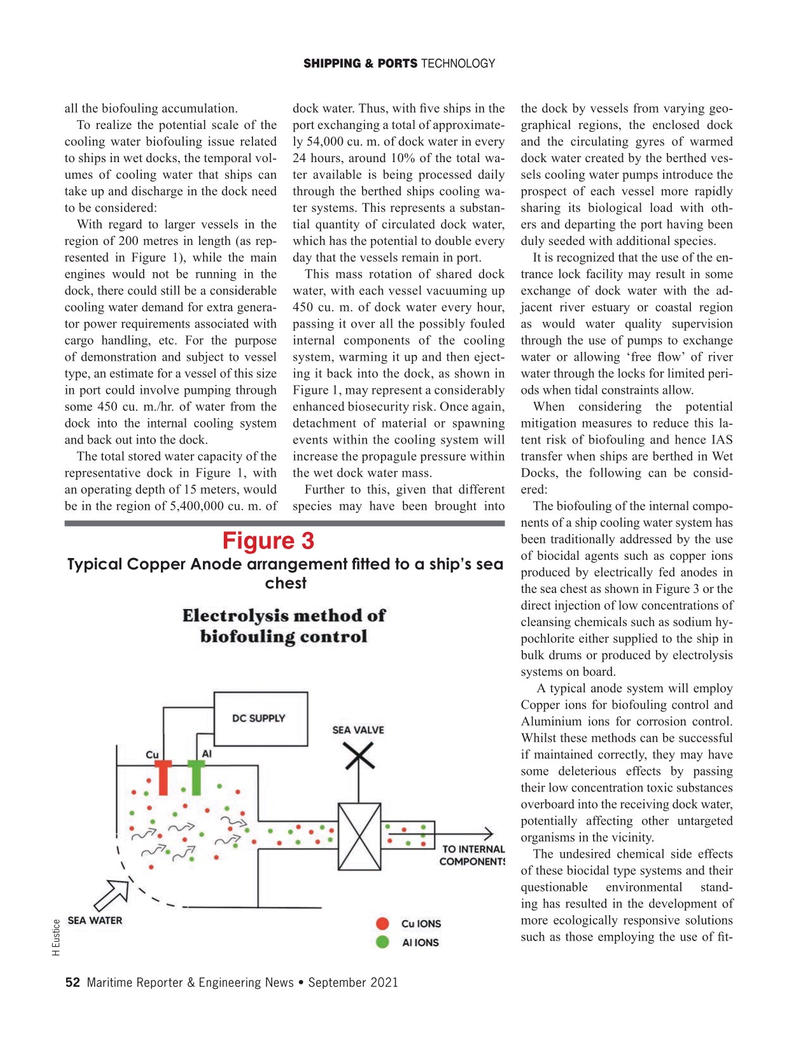 SHIPPING & PORTS TECHNOLOGY all the biofouling accumulation. dock water. Thus, with ? ve ships in the the dock by vessels from varying geo-

To realize the potential scale of the port exchanging a total of approximate- graphical regions, the enclosed dock cooling water biofouling issue related ly 54,000 cu. m. of dock water in every and the circulating gyres of warmed to ships in wet docks, the temporal vol- 24 hours, around 10% of the total wa- dock water created by the berthed ves- umes of cooling water that ships can ter available is being processed daily sels cooling water pumps introduce the take up and discharge in the dock need through the berthed ships cooling wa- prospect of each vessel more rapidly to be considered: ter systems. This represents a substan- sharing its biological load with oth-

With regard to larger vessels in the tial quantity of circulated dock water, ers and departing the port having been region of 200 metres in length (as rep- which has the potential to double every duly seeded with additional species.

resented in Figure 1), while the main day that the vessels remain in port. It is recognized that the use of the en- engines would not be running in the This mass rotation of shared dock trance lock facility may result in some dock, there could still be a considerable water, with each vessel vacuuming up exchange of dock water with the ad- cooling water demand for extra genera- 450 cu. m. of dock water every hour, jacent river estuary or coastal region tor power requirements associated with passing it over all the possibly fouled as would water quality supervision cargo handling, etc. For the purpose internal components of the cooling through the use of pumps to exchange of demonstration and subject to vessel system, warming it up and then eject- water or allowing ‘free ? ow’ of river type, an estimate for a vessel of this size ing it back into the dock, as shown in water through the locks for limited peri- in port could involve pumping through Figure 1, may represent a considerably ods when tidal constraints allow. some 450 cu. m./hr. of water from the enhanced biosecurity risk. Once again, When considering the potential dock into the internal cooling system detachment of material or spawning mitigation measures to reduce this la- and back out into the dock. events within the cooling system will tent risk of biofouling and hence IAS

The total stored water capacity of the increase the propagule pressure within transfer when ships are berthed in Wet representative dock in Figure 1, with the wet dock water mass. Docks, the following can be consid- an operating depth of 15 meters, would Further to this, given that different ered: be in the region of 5,400,000 cu. m. of species may have been brought into The biofouling of the internal compo- nents of a ship cooling water system has been traditionally addressed by the use

Figure 4. of biocidal agents such as copper ions

Typical Copper Anode arrangement ? tted to a ship’s sea produced by electrically fed anodes in chest the sea chest as shown in Figure 3 or the direct injection of low concentrations of cleansing chemicals such as sodium hy- pochlorite either supplied to the ship in bulk drums or produced by electrolysis systems on board. A typical anode system will employ

Copper ions for biofouling control and

Whilst these methods can be successful if maintained correctly, they may have some deleterious effects by passing their low concentration toxic substances overboard into the receiving dock water, potentially affecting other untargeted organisms in the vicinity.

The undesired chemical side effects of these biocidal type systems and their questionable environmental stand- ing has resulted in the development of more ecologically responsive solutions such as those employing the use of ? t-