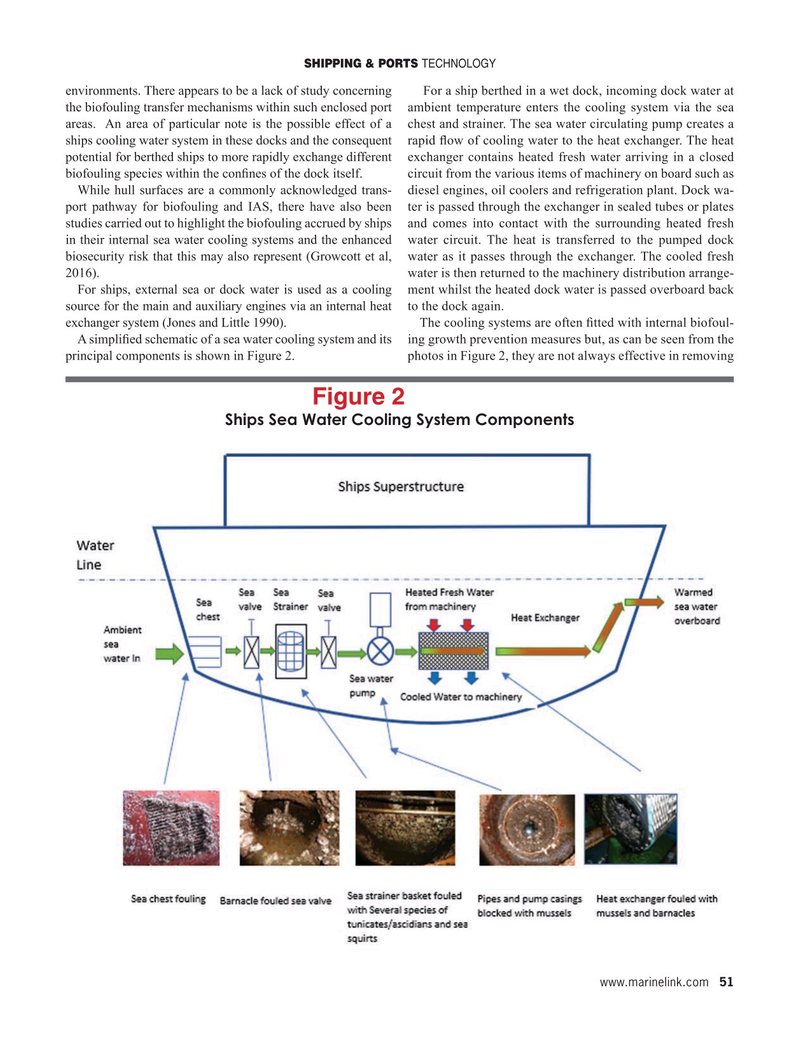 SHIPPING & PORTS TECHNOLOGY environments. There appears to be a lack of study concerning For a ship berthed in a wet dock, incoming dock water at the biofouling transfer mechanisms within such enclosed port ambient temperature enters the cooling system via the sea areas. An area of particular note is the possible effect of a chest and strainer. The sea water circulating pump creates a ships cooling water system in these docks and the consequent rapid ? ow of cooling water to the heat exchanger. The heat potential for berthed ships to more rapidly exchange different exchanger contains heated fresh water arriving in a closed biofouling species within the con? nes of the dock itself. circuit from the various items of machinery on board such as

While hull surfaces are a commonly acknowledged trans- diesel engines, oil coolers and refrigeration plant. Dock wa- port pathway for biofouling and IAS, there have also been ter is passed through the exchanger in sealed tubes or plates studies carried out to highlight the biofouling accrued by ships and comes into contact with the surrounding heated fresh in their internal sea water cooling systems and the enhanced water circuit. The heat is transferred to the pumped dock biosecurity risk that this may also represent (Growcott et al, water as it passes through the exchanger. The cooled fresh 2016). water is then returned to the machinery distribution arrange-

For ships, external sea or dock water is used as a cooling ment whilst the heated dock water is passed overboard back source for the main and auxiliary engines via an internal heat to the dock again.

A simpli? ed schematic of a sea water cooling system and its ing growth prevention measures but, as can be seen from the principal components is shown in Figure 2. photos in Figure 2, they are not always effective in removing