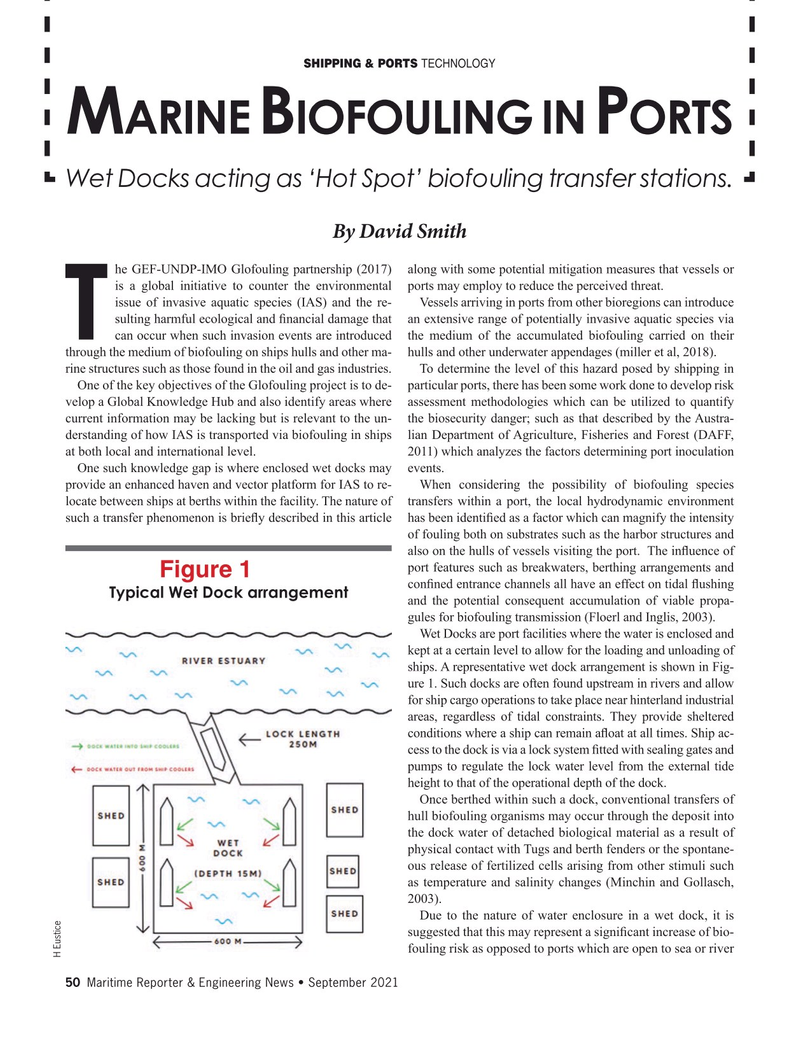 By David Smith he GEF-UNDP-IMO Glofouling partnership (2017) along with some potential mitigation measures that vessels or is a global initiative to counter the environmental ports may employ to reduce the perceived threat. issue of invasive aquatic species (IAS) and the re- Vessels arriving in ports from other bioregions can introduce sulting harmful ecological and ? nancial damage that an extensive range of potentially invasive aquatic species via

rine structures such as those found in the oil and gas industries. To determine the level of this hazard posed by shipping in

One of the key objectives of the Glofouling project is to de- particular ports, there has been some work done to develop risk velop a Global Knowledge Hub and also identify areas where assessment methodologies which can be utilized to quantify current information may be lacking but is relevant to the un- the biosecurity danger; such as that described by the Austra- derstanding of how IAS is transported via biofouling in ships lian Department of Agriculture, Fisheries and Forest (DAFF, at both local and international level. 2011) which analyzes the factors determining port inoculation

One such knowledge gap is where enclosed wet docks may events.

provide an enhanced haven and vector platform for IAS to re- When considering the possibility of biofouling species locate between ships at berths within the facility. The nature of transfers within a port, the local hydrodynamic environment such a transfer phenomenon is brie? y described in this article has been identi? ed as a factor which can magnify the intensity of fouling both on substrates such as the harbor structures and also on the hulls of vessels visiting the port. The in? uence of port features such as breakwaters, berthing arrangements and

Figure 2. con? ned entrance channels all have an effect on tidal ? ushing

Wet Docks are port facilities where the water is enclosed and kept at a certain level to allow for the loading and unloading of ships. A representative wet dock arrangement is shown in Fig- ure 1. Such docks are often found upstream in rivers and allow for ship cargo operations to take place near hinterland industrial areas, regardless of tidal constraints. They provide sheltered conditions where a ship can remain a? oat at all times. Ship ac- cess to the dock is via a lock system ? tted with sealing gates and pumps to regulate the lock water level from the external tide height to that of the operational depth of the dock.

Once berthed within such a dock, conventional transfers of hull biofouling organisms may occur through the deposit into the dock water of detached biological material as a result of physical contact with Tugs and berth fenders or the spontane- ous release of fertilized cells arising from other stimuli such as temperature and salinity changes (Minchin and Gollasch, 2003).

Due to the nature of water enclosure in a wet dock, it is suggested that this may represent a signi? cant increase of bio- fouling risk as opposed to ports which are open to sea or river