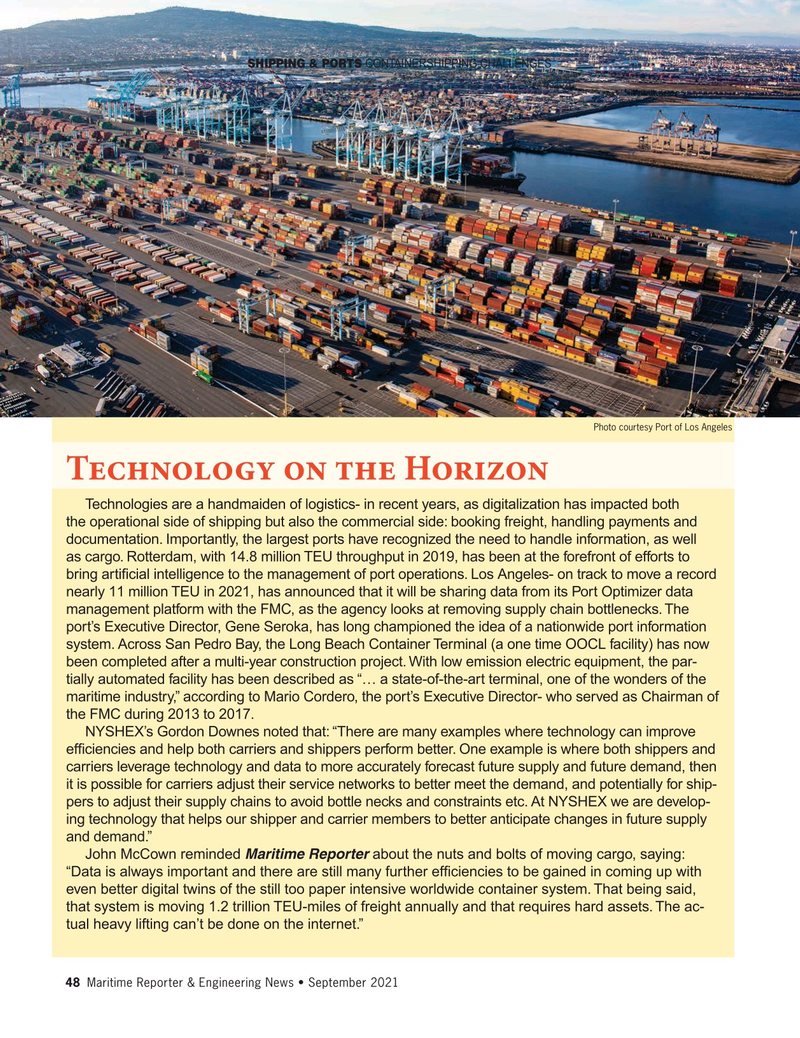 Technology on the Horizon

Technologies are a handmaiden of logistics- in recent years, as digitalization has impacted both the operational side of shipping but also the commercial side: booking freight, handling payments and documentation. Importantly, the largest ports have recognized the need to handle information, as well as cargo. Rotterdam, with 14.8 million TEU throughput in 2019, has been at the forefront of efforts to bring arti? cial intelligence to the management of port operations. Los Angeles- on track to move a record nearly 11 million TEU in 2021, has announced that it will be sharing data from its Port Optimizer data management platform with the FMC, as the agency looks at removing supply chain bottlenecks. The port’s Executive Director, Gene Seroka, has long championed the idea of a nationwide port information system. Across San Pedro Bay, the Long Beach Container Terminal (a one time OOCL facility) has now been completed after a multi-year construction project. With low emission electric equipment, the par- tially automated facility has been described as “… a state-of-the-art terminal, one of the wonders of the maritime industry,” according to Mario Cordero, the port’s Executive Director- who served as Chairman of the FMC during 2013 to 2017.

NYSHEX’s Gordon Downes noted that: “There are many examples where technology can improve ef? ciencies and help both carriers and shippers perform better. One example is where both shippers and carriers leverage technology and data to more accurately forecast future supply and future demand, then it is possible for carriers adjust their service networks to better meet the demand, and potentially for ship- pers to adjust their supply chains to avoid bottle necks and constraints etc. At NYSHEX we are develop- ing technology that helps our shipper and carrier members to better anticipate changes in future supply and demand.”

John McCown reminded Maritime Reporter about the nuts and bolts of moving cargo, saying: “Data is always important and there are still many further ef? ciencies to be gained in coming up with even better digital twins of the still too paper intensive worldwide container system. That being said, that system is moving 1.2 trillion TEU-miles of freight annually and that requires hard assets. The ac- tual heavy lifting can’t be done on the internet.” 48 Maritime Reporter & Engineering News • September 2021