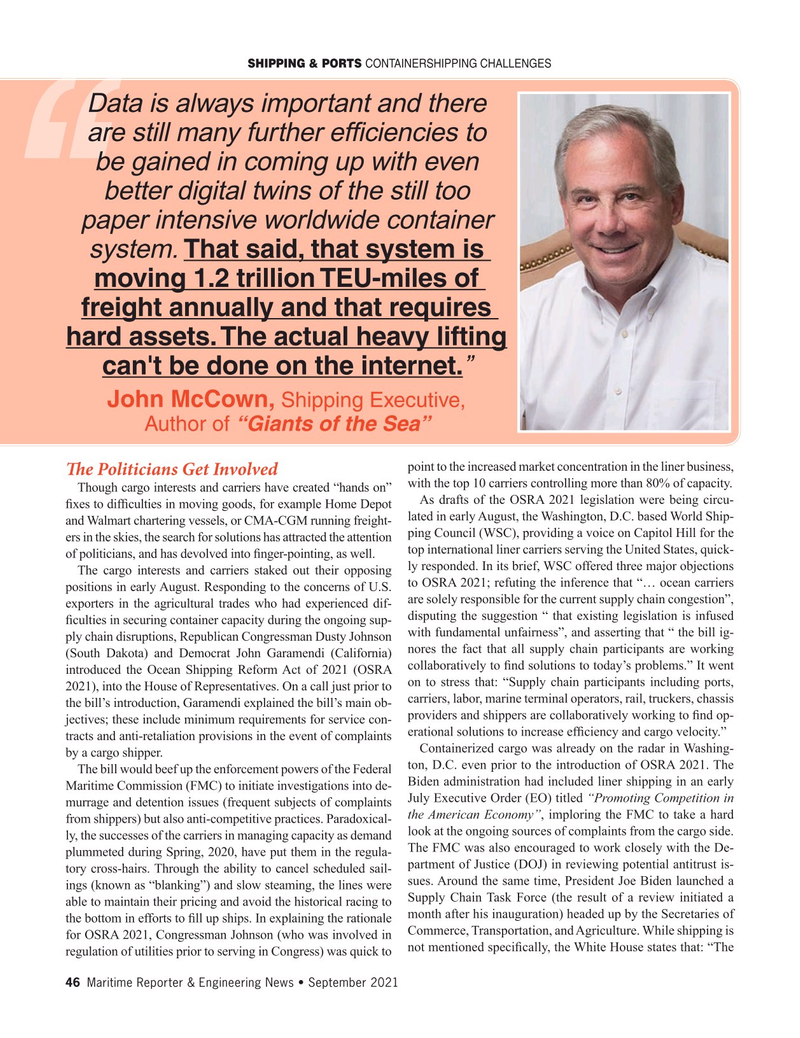 Data is always important and there are still many further ef? ciencies to be gained in coming up with even better digital twins of the still too paper intensive worldwide container system. That said, that system is moving 1.2 trillion TEU-miles of freight annually and that requires hard assets. The actual heavy lifting can't be done on the internet.”

Author of “Giants of the Sea” point to the increased market concentration in the liner business,

Though cargo interests and carriers have created “hands on” with the top 10 carriers controlling more than 80% of capacity.

As drafts of the OSRA 2021 legislation were being circu- ? xes to dif? culties in moving goods, for example Home Depot lated in early August, the Washington, D.C. based World Ship- and Walmart chartering vessels, or CMA-CGM running freight- ping Council (WSC), providing a voice on Capitol Hill for the ers in the skies, the search for solutions has attracted the attention top international liner carriers serving the United States, quick- of politicians, and has devolved into ? nger-pointing, as well.

The cargo interests and carriers staked out their opposing ly responded. In its brief, WSC offered three major objections positions in early August. Responding to the concerns of U.S. to OSRA 2021; refuting the inference that “… ocean carriers are solely responsible for the current supply chain congestion”, exporters in the agricultural trades who had experienced dif- disputing the suggestion “ that existing legislation is infused ? culties in securing container capacity during the ongoing sup- with fundamental unfairness”, and asserting that “ the bill ig- ply chain disruptions, Republican Congressman Dusty Johnson (South Dakota) and Democrat John Garamendi (California) nores the fact that all supply chain participants are working introduced the Ocean Shipping Reform Act of 2021 (OSRA collaboratively to ? nd solutions to today’s problems.” It went on to stress that: “Supply chain participants including ports, 2021), into the House of Representatives. On a call just prior to carriers, labor, marine terminal operators, rail, truckers, chassis the bill’s introduction, Garamendi explained the bill’s main ob- providers and shippers are collaboratively working to ? nd op- jectives; these include minimum requirements for service con- tracts and anti-retaliation provisions in the event of complaints erational solutions to increase ef? ciency and cargo velocity.”

Containerized cargo was already on the radar in Washing- by a cargo shipper. ton, D.C. even prior to the introduction of OSRA 2021. The

The bill would beef up the enforcement powers of the Federal

Biden administration had included liner shipping in an early

Maritime Commission (FMC) to initiate investigations into de- murrage and detention issues (frequent subjects of complaints July Executive Order (EO) titled “Promoting Competition in the American Economy”, imploring the FMC to take a hard from shippers) but also anti-competitive practices. Paradoxical- look at the ongoing sources of complaints from the cargo side. ly, the successes of the carriers in managing capacity as demand

The FMC was also encouraged to work closely with the De- plummeted during Spring, 2020, have put them in the regula- partment of Justice (DOJ) in reviewing potential antitrust is- tory cross-hairs. Through the ability to cancel scheduled sail- ings (known as “blanking”) and slow steaming, the lines were sues. Around the same time, President Joe Biden launched a able to maintain their pricing and avoid the historical racing to Supply Chain Task Force (the result of a review initiated a month after his inauguration) headed up by the Secretaries of the bottom in efforts to ? ll up ships. In explaining the rationale for OSRA 2021, Congressman Johnson (who was involved in Commerce, Transportation, and Agriculture. While shipping is not mentioned speci? cally, the White House states that: “The regulation of utilities prior to serving in Congress) was quick to 46 Maritime Reporter & Engineering News • September 2021