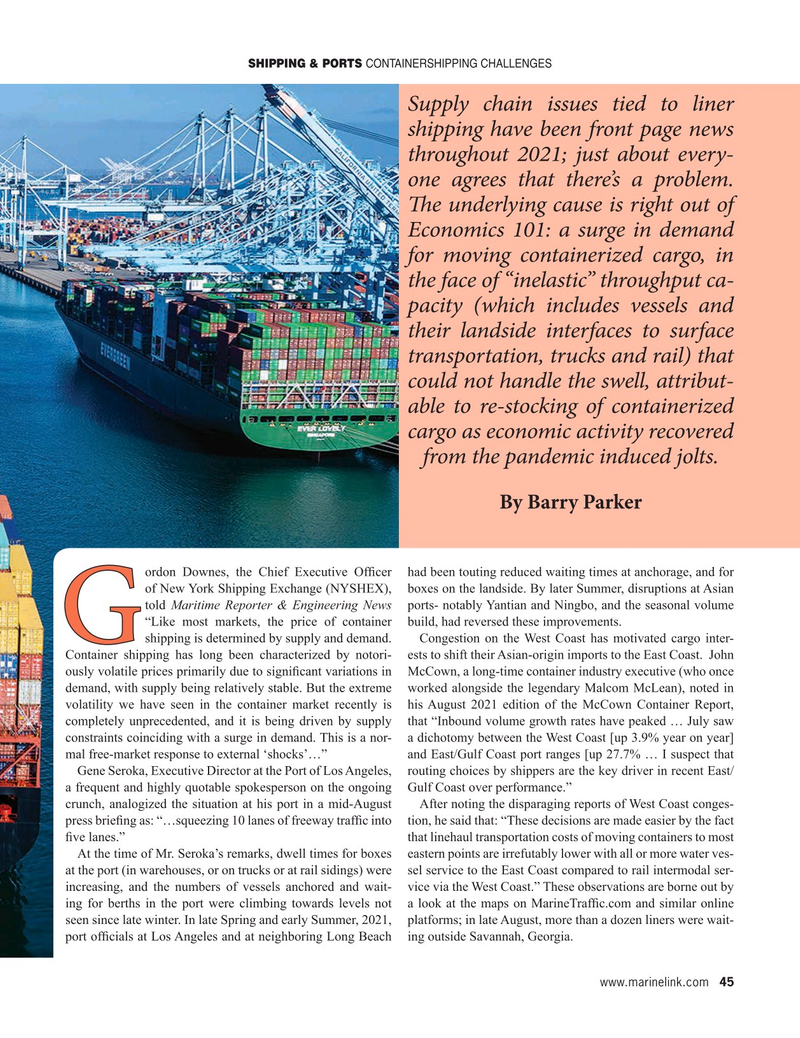 Supply chain issues tied to liner shipping have been front page news throughout 2021; just about every- one agrees that there’s a problem.

T e underlying cause is right out of

Economics 101: a surge in demand for moving containerized cargo, in the face of “inelastic” throughput ca- pacity (which includes vessels and their landside interfaces to surface transportation, trucks and rail) that could not handle the swell, attribut- able to re-stocking of containerized cargo as economic activity recovered from the pandemic induced jolts.

By Barry Parker ordon Downes, the Chief Executive Of? cer had been touting reduced waiting times at anchorage, and for of New York Shipping Exchange (NYSHEX), boxes on the landside. By later Summer, disruptions at Asian told Maritime Reporter & Engineering News ports- notably Yantian and Ningbo, and the seasonal volume “Like most markets, the price of container build, had reversed these improvements.

G shipping is determined by supply and demand. Congestion on the West Coast has motivated cargo inter-

Container shipping has long been characterized by notori- ests to shift their Asian-origin imports to the East Coast. John ously volatile prices primarily due to signi? cant variations in McCown, a long-time container industry executive (who once demand, with supply being relatively stable. But the extreme worked alongside the legendary Malcom McLean), noted in volatility we have seen in the container market recently is his August 2021 edition of the McCown Container Report, completely unprecedented, and it is being driven by supply that “Inbound volume growth rates have peaked … July saw constraints coinciding with a surge in demand. This is a nor- a dichotomy between the West Coast [up 3.9% year on year] mal free-market response to external ‘shocks’…” and East/Gulf Coast port ranges [up 27.7% … I suspect that

Gene Seroka, Executive Director at the Port of Los Angeles, routing choices by shippers are the key driver in recent East/ a frequent and highly quotable spokesperson on the ongoing Gulf Coast over performance.” crunch, analogized the situation at his port in a mid-August After noting the disparaging reports of West Coast conges- press brie? ng as: “…squeezing 10 lanes of freeway traf? c into tion, he said that: “These decisions are made easier by the fact ? ve lanes.” that linehaul transportation costs of moving containers to most

At the time of Mr. Seroka’s remarks, dwell times for boxes eastern points are irrefutably lower with all or more water ves- at the port (in warehouses, or on trucks or at rail sidings) were sel service to the East Coast compared to rail intermodal ser- increasing, and the numbers of vessels anchored and wait- vice via the West Coast.” These observations are borne out by ing for berths in the port were climbing towards levels not a look at the maps on MarineTraf? c.com and similar online seen since late winter. In late Spring and early Summer, 2021, platforms; in late August, more than a dozen liners were wait- port of? cials at Los Angeles and at neighboring Long Beach ing outside Savannah, Georgia. www.marinelink.com 45