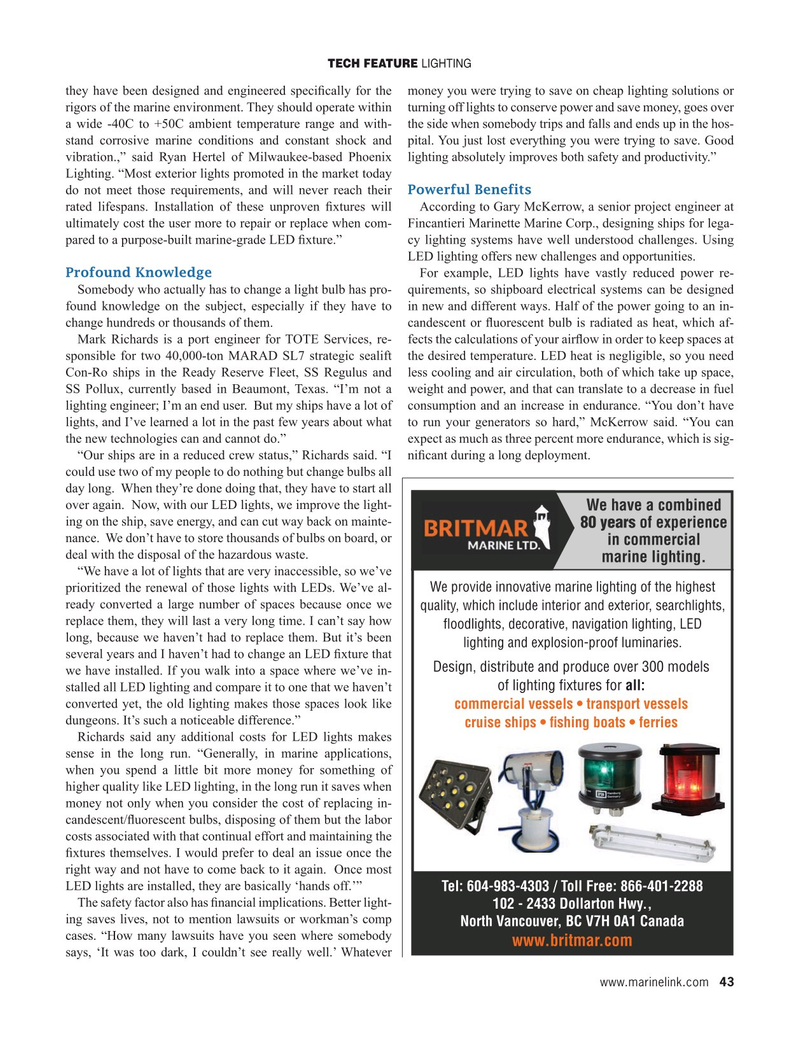 TECH FEATURE LIGHTING they have been designed and engineered speci? cally for the money you were trying to save on cheap lighting solutions or rigors of the marine environment. They should operate within turning off lights to conserve power and save money, goes over a wide -40C to +50C ambient temperature range and with- the side when somebody trips and falls and ends up in the hos- stand corrosive marine conditions and constant shock and pital. You just lost everything you were trying to save. Good vibration.,” said Ryan Hertel of Milwaukee-based Phoenix lighting absolutely improves both safety and productivity.”

Lighting. “Most exterior lights promoted in the market today do not meet those requirements, and will never reach their Powerful Benefits rated lifespans. Installation of these unproven ? xtures will According to Gary McKerrow, a senior project engineer at ultimately cost the user more to repair or replace when com- Fincantieri Marinette Marine Corp., designing ships for lega- pared to a purpose-built marine-grade LED ? xture.” cy lighting systems have well understood challenges. Using

Somebody who actually has to change a light bulb has pro- quirements, so shipboard electrical systems can be designed found knowledge on the subject, especially if they have to in new and different ways. Half of the power going to an in- change hundreds or thousands of them. candescent or ? uorescent bulb is radiated as heat, which af-

Mark Richards is a port engineer for TOTE Services, re- fects the calculations of your air? ow in order to keep spaces at sponsible for two 40,000-ton MARAD SL7 strategic sealift the desired temperature. LED heat is negligible, so you need

Con-Ro ships in the Ready Reserve Fleet, SS Regulus and less cooling and air circulation, both of which take up space,

SS Pollux, currently based in Beaumont, Texas. “I’m not a weight and power, and that can translate to a decrease in fuel lighting engineer; I’m an end user. But my ships have a lot of consumption and an increase in endurance. “You don’t have lights, and I’ve learned a lot in the past few years about what to run your generators so hard,” McKerrow said. “You can the new technologies can and cannot do.” expect as much as three percent more endurance, which is sig- “Our ships are in a reduced crew status,” Richards said. “I ni? cant during a long deployment.

could use two of my people to do nothing but change bulbs all day long. When they’re done doing that, they have to start all over again. Now, with our LED lights, we improve the light-

We have a combined ing on the ship, save energy, and can cut way back on mainte- 80 years of experience nance. We don’t have to store thousands of bulbs on board, or in commercial deal with the disposal of the hazardous waste. marine lighting.

“We have a lot of lights that are very inaccessible, so we’ve

We provide innovative marine lighting of the highest prioritized the renewal of those lights with LEDs. We’ve al- ready converted a large number of spaces because once we quality, which include interior and exterior, searchlights, replace them, they will last a very long time. I can’t say how ?oodlights, decorative, navigation lighting, LED long, because we haven’t had to replace them. But it’s been lighting and explosion-proof luminaries.

several years and I haven’t had to change an LED ? xture that

Design, distribute and produce over 300 models we have installed. If you walk into a space where we’ve in- of lighting ?xtures for all: stalled all LED lighting and compare it to one that we haven’t converted yet, the old lighting makes those spaces look like