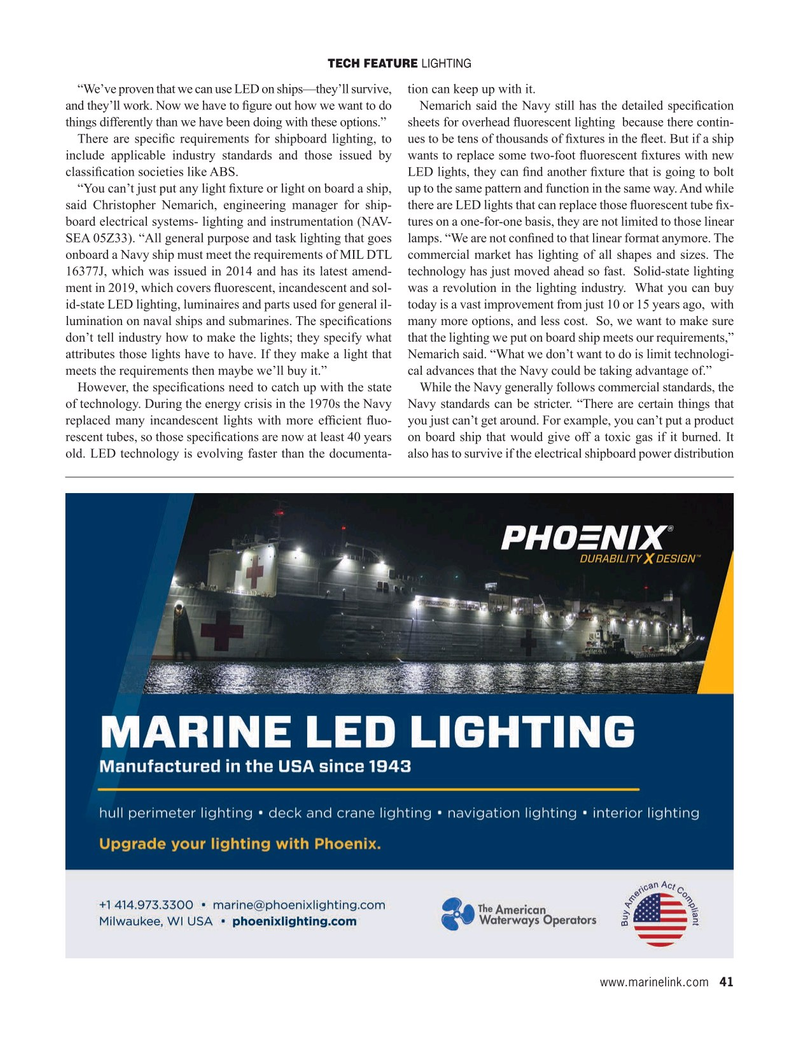 TECH FEATURE LIGHTING “We’ve proven that we can use LED on ships—they’ll survive, tion can keep up with it.

and they’ll work. Now we have to ? gure out how we want to do Nemarich said the Navy still has the detailed speci? cation things differently than we have been doing with these options.” sheets for overhead ? uorescent lighting because there contin-

There are speci? c requirements for shipboard lighting, to ues to be tens of thousands of ? xtures in the ? eet. But if a ship include applicable industry standards and those issued by wants to replace some two-foot ? uorescent ? xtures with new classi? cation societies like ABS. LED lights, they can ? nd another ? xture that is going to bolt “You can’t just put any light ? xture or light on board a ship, up to the same pattern and function in the same way. And while said Christopher Nemarich, engineering manager for ship- there are LED lights that can replace those ? uorescent tube ? x- board electrical systems- lighting and instrumentation (NAV- tures on a one-for-one basis, they are not limited to those linear

SEA 05Z33). “All general purpose and task lighting that goes lamps. “We are not con? ned to that linear format anymore. The onboard a Navy ship must meet the requirements of MIL DTL commercial market has lighting of all shapes and sizes. The 16377J, which was issued in 2014 and has its latest amend- technology has just moved ahead so fast. Solid-state lighting ment in 2019, which covers ? uorescent, incandescent and sol- was a revolution in the lighting industry. What you can buy id-state LED lighting, luminaires and parts used for general il- today is a vast improvement from just 10 or 15 years ago, with lumination on naval ships and submarines. The speci? cations many more options, and less cost. So, we want to make sure don’t tell industry how to make the lights; they specify what that the lighting we put on board ship meets our requirements,” attributes those lights have to have. If they make a light that Nemarich said. “What we don’t want to do is limit technologi- meets the requirements then maybe we’ll buy it.” cal advances that the Navy could be taking advantage of.”

However, the speci? cations need to catch up with the state While the Navy generally follows commercial standards, the of technology. During the energy crisis in the 1970s the Navy Navy standards can be stricter. “There are certain things that replaced many incandescent lights with more ef? cient ? uo- you just can’t get around. For example, you can’t put a product rescent tubes, so those speci? cations are now at least 40 years on board ship that would give off a toxic gas if it burned. It old. LED technology is evolving faster than the documenta- also has to survive if the electrical shipboard power distribution www.marinelink.com 41