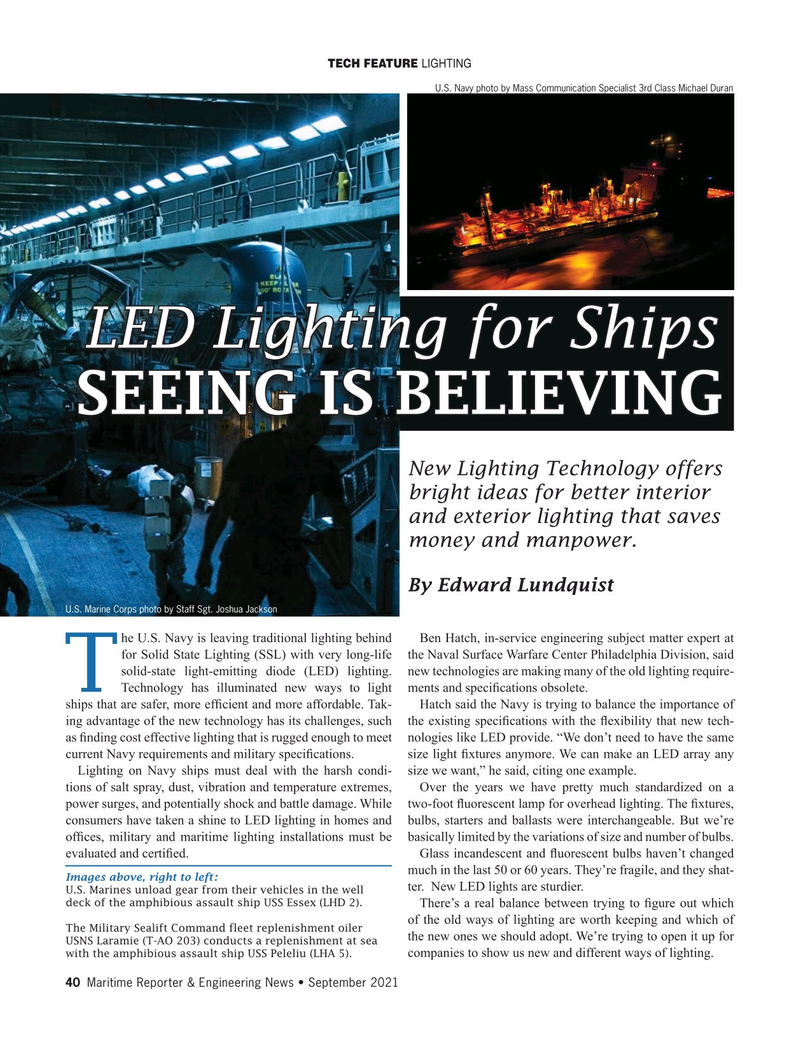 ships that are safer, more ef? cient and more affordable. Tak- Hatch said the Navy is trying to balance the importance of ing advantage of the new technology has its challenges, such the existing speci? cations with the ? exibility that new tech- as ? nding cost effective lighting that is rugged enough to meet nologies like LED provide. “We don’t need to have the same current Navy requirements and military speci? cations. size light ? xtures anymore. We can make an LED array any

Lighting on Navy ships must deal with the harsh condi- size we want,” he said, citing one example.

tions of salt spray, dust, vibration and temperature extremes, Over the years we have pretty much standardized on a power surges, and potentially shock and battle damage. While two-foot ? uorescent lamp for overhead lighting. The ? xtures, consumers have taken a shine to LED lighting in homes and bulbs, starters and ballasts were interchangeable. But we’re of? ces, military and maritime lighting installations must be basically limited by the variations of size and number of bulbs.

evaluated and certi? ed. Glass incandescent and ? uorescent bulbs haven’t changed much in the last 50 or 60 years. They’re fragile, and they shat-

U.S. Marines unload gear from their vehicles in the well deck of the amphibious assault ship USS Essex (LHD 2).

There’s a real balance between trying to ? gure out which of the old ways of lighting are worth keeping and which of

The Military Sealift Command fleet replenishment oiler the new ones we should adopt. We’re trying to open it up for

USNS Laramie (T-AO 203) conducts a replenishment at sea companies to show us new and different ways of lighting.