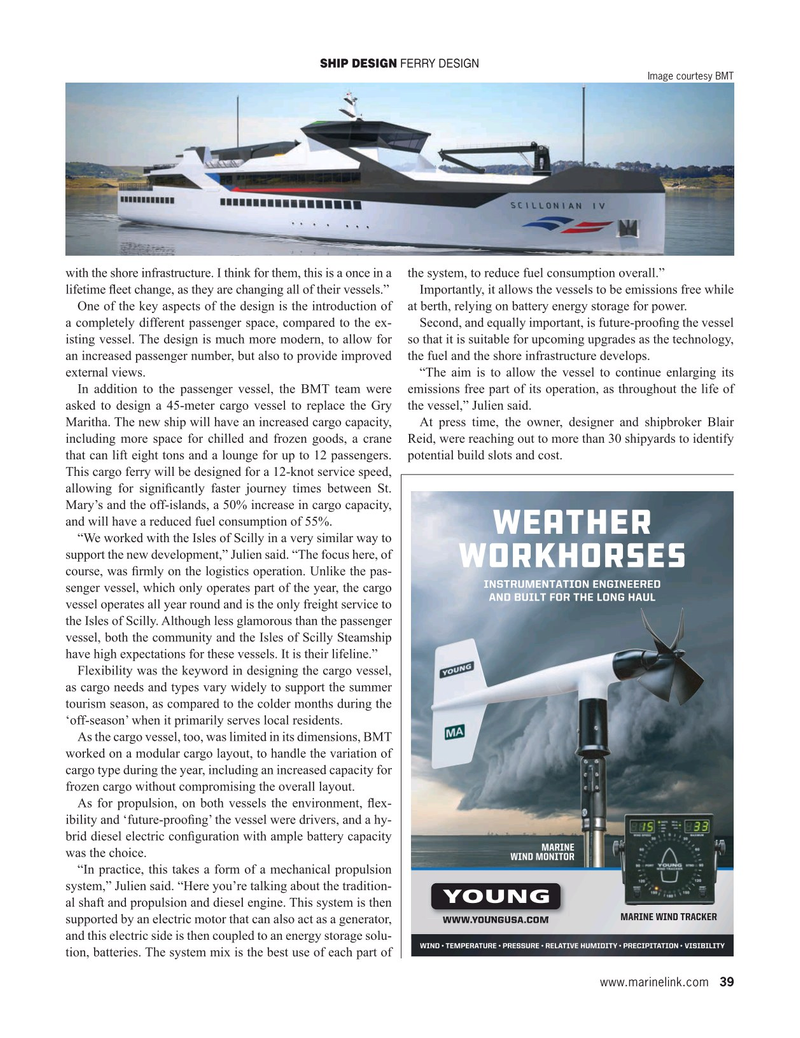 Image courtesy BMT with the shore infrastructure. I think for them, this is a once in a the system, to reduce fuel consumption overall.” lifetime ? eet change, as they are changing all of their vessels.” Importantly, it allows the vessels to be emissions free while

One of the key aspects of the design is the introduction of at berth, relying on battery energy storage for power.

a completely different passenger space, compared to the ex- Second, and equally important, is future-proo? ng the vessel isting vessel. The design is much more modern, to allow for so that it is suitable for upcoming upgrades as the technology, an increased passenger number, but also to provide improved the fuel and the shore infrastructure develops.

external views. “The aim is to allow the vessel to continue enlarging its

In addition to the passenger vessel, the BMT team were emissions free part of its operation, as throughout the life of asked to design a 45-meter cargo vessel to replace the Gry the vessel,” Julien said.

Maritha. The new ship will have an increased cargo capacity, At press time, the owner, designer and shipbroker Blair including more space for chilled and frozen goods, a crane Reid, were reaching out to more than 30 shipyards to identify that can lift eight tons and a lounge for up to 12 passengers. potential build slots and cost.

This cargo ferry will be designed for a 12-knot service speed, allowing for signi? cantly faster journey times between St.

Mary’s and the off-islands, a 50% increase in cargo capacity, and will have a reduced fuel consumption of 55%.

“We worked with the Isles of Scilly in a very similar way to support the new development,” Julien said. “The focus here, of course, was ? rmly on the logistics operation. Unlike the pas- senger vessel, which only operates part of the year, the cargo vessel operates all year round and is the only freight service to the Isles of Scilly. Although less glamorous than the passenger vessel, both the community and the Isles of Scilly Steamship have high expectations for these vessels. It is their lifeline.”

Flexibility was the keyword in designing the cargo vessel, as cargo needs and types vary widely to support the summer tourism season, as compared to the colder months during the ‘off-season’ when it primarily serves local residents.

As the cargo vessel, too, was limited in its dimensions, BMT worked on a modular cargo layout, to handle the variation of cargo type during the year, including an increased capacity for frozen cargo without compromising the overall layout.

As for propulsion, on both vessels the environment, ? ex- ibility and ‘future-proo? ng’ the vessel were drivers, and a hy- brid diesel electric con? guration with ample battery capacity was the choice.

“In practice, this takes a form of a mechanical propulsion system,” Julien said. “Here you’re talking about the tradition- al shaft and propulsion and diesel engine. This system is then supported by an electric motor that can also act as a generator, and this electric side is then coupled to an energy storage solu- tion, batteries. The system mix is the best use of each part of www.marinelink.com 39