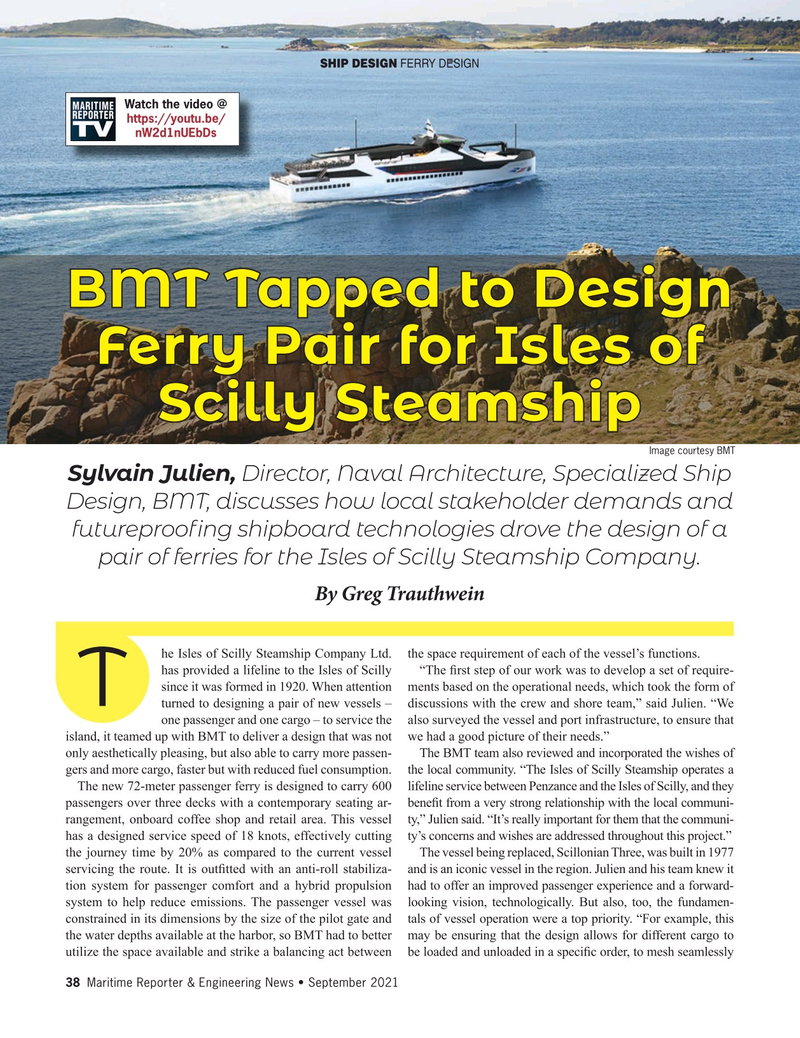 Ferry Pair for Isles of

Design, BMT, discusses how local stakeholder demands and futureproo? ng shipboard technologies drove the design of a pair of ferries for the Isles of Scilly Steamship Company.

By Greg Trauthwein he Isles of Scilly Steamship Company Ltd. the space requirement of each of the vessel’s functions. has provided a lifeline to the Isles of Scilly “The ? rst step of our work was to develop a set of require- since it was formed in 1920. When attention ments based on the operational needs, which took the form of turned to designing a pair of new vessels – discussions with the crew and shore team,” said Julien. “We one passenger and one cargo – to service the also surveyed the vessel and port infrastructure, to ensure that island, it teamed up with BMT to deliver a design that was not we had a good picture of their needs.” only aesthetically pleasing, but also able to carry more passen- The BMT team also reviewed and incorporated the wishes of gers and more cargo, faster but with reduced fuel consumption. the local community. “The Isles of Scilly Steamship operates a

The new 72-meter passenger ferry is designed to carry 600 lifeline service between Penzance and the Isles of Scilly, and they passengers over three decks with a contemporary seating ar- bene? t from a very strong relationship with the local communi- rangement, onboard coffee shop and retail area. This vessel ty,” Julien said. “It’s really important for them that the communi- has a designed service speed of 18 knots, effectively cutting ty’s concerns and wishes are addressed throughout this project.” the journey time by 20% as compared to the current vessel The vessel being replaced, Scillonian Three, was built in 1977 servicing the route. It is out? tted with an anti-roll stabiliza- and is an iconic vessel in the region. Julien and his team knew it tion system for passenger comfort and a hybrid propulsion had to offer an improved passenger experience and a forward- system to help reduce emissions. The passenger vessel was looking vision, technologically. But also, too, the fundamen- constrained in its dimensions by the size of the pilot gate and tals of vessel operation were a top priority. “For example, this the water depths available at the harbor, so BMT had to better may be ensuring that the design allows for different cargo to utilize the space available and strike a balancing act between be loaded and unloaded in a speci? c order, to mesh seamlessly 38 Maritime Reporter & Engineering News • September 2021