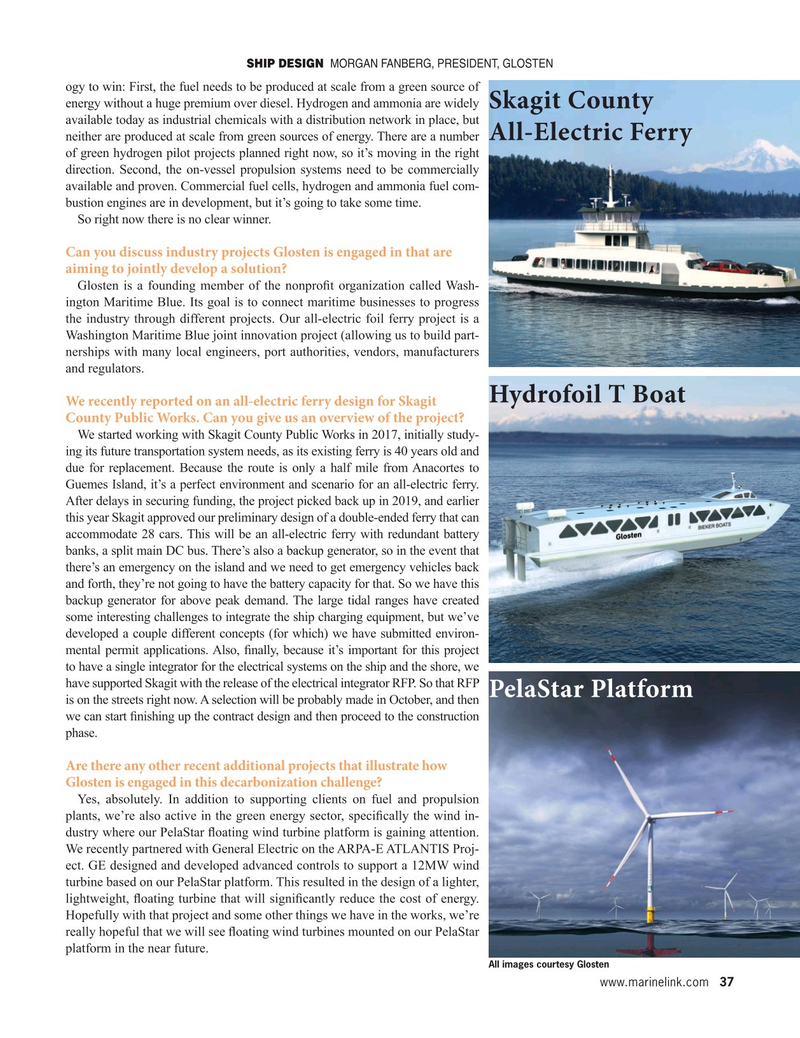 SHIP DESIGN MORGAN FANBERG, PRESIDENT, GLOSTEN ogy to win: First, the fuel needs to be produced at scale from a green source of energy without a huge premium over diesel. Hydrogen and ammonia are widely

Skagit County available today as industrial chemicals with a distribution network in place, but

All-Electric Ferry neither are produced at scale from green sources of energy. There are a number of green hydrogen pilot projects planned right now, so it’s moving in the right direction. Second, the on-vessel propulsion systems need to be commercially available and proven. Commercial fuel cells, hydrogen and ammonia fuel com- bustion engines are in development, but it’s going to take some time.

So right now there is no clear winner.

Can you discuss industry projects Glosten is engaged in that are aiming to jointly develop a solution?

Glosten is a founding member of the nonpro? t organization called Wash- ington Maritime Blue. Its goal is to connect maritime businesses to progress the industry through different projects. Our all-electric foil ferry project is a

We recently reported on an all-electric ferry design for Skagit

County Public Works. Can you give us an overview of the project?

We started working with Skagit County Public Works in 2017, initially study- ing its future transportation system needs, as its existing ferry is 40 years old and due for replacement. Because the route is only a half mile from Anacortes to

Guemes Island, it’s a perfect environment and scenario for an all-electric ferry.

After delays in securing funding, the project picked back up in 2019, and earlier this year Skagit approved our preliminary design of a double-ended ferry that can accommodate 28 cars. This will be an all-electric ferry with redundant battery banks, a split main DC bus. There’s also a backup generator, so in the event that there’s an emergency on the island and we need to get emergency vehicles back and forth, they’re not going to have the battery capacity for that. So we have this backup generator for above peak demand. The large tidal ranges have created some interesting challenges to integrate the ship charging equipment, but we’ve developed a couple different concepts (for which) we have submitted environ- mental permit applications. Also, ? nally, because it’s important for this project to have a single integrator for the electrical systems on the ship and the shore, we have supported Skagit with the release of the electrical integrator RFP. So that RFP

PelaStar Platform is on the streets right now. A selection will be probably made in October, and then we can start ? nishing up the contract design and then proceed to the construction phase.

Are there any other recent additional projects that illustrate how

Glosten is engaged in this decarbonization challenge?

Yes, absolutely. In addition to supporting clients on fuel and propulsion plants, we’re also active in the green energy sector, speci? cally the wind in- dustry where our PelaStar ? oating wind turbine platform is gaining attention.

We recently partnered with General Electric on the ARPA-E ATLANTIS Proj- ect. GE designed and developed advanced controls to support a 12MW wind turbine based on our PelaStar platform. This resulted in the design of a lighter, lightweight, ? oating turbine that will signi? cantly reduce the cost of energy.

Hopefully with that project and some other things we have in the works, we’re really hopeful that we will see ? oating wind turbines mounted on our PelaStar platform in the near future.