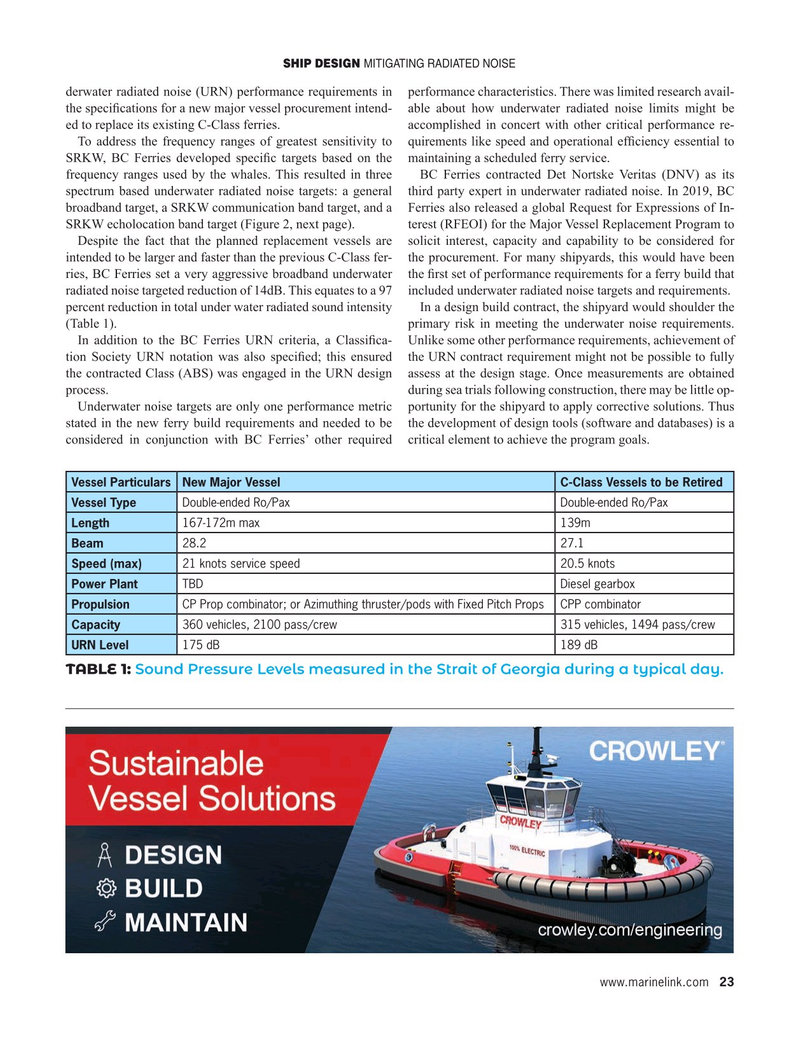 To address the frequency ranges of greatest sensitivity to quirements like speed and operational ef? ciency essential to

SRKW, BC Ferries developed speci? c targets based on the maintaining a scheduled ferry service. frequency ranges used by the whales. This resulted in three BC Ferries contracted Det Nortske Veritas (DNV) as its spectrum based underwater radiated noise targets: a general third party expert in underwater radiated noise. In 2019, BC broadband target, a SRKW communication band target, and a Ferries also released a global Request for Expressions of In-

Despite the fact that the planned replacement vessels are solicit interest, capacity and capability to be considered for intended to be larger and faster than the previous C-Class fer- the procurement. For many shipyards, this would have been ries, BC Ferries set a very aggressive broadband underwater the ? rst set of performance requirements for a ferry build that radiated noise targeted reduction of 14dB. This equates to a 97 included underwater radiated noise targets and requirements. percent reduction in total under water radiated sound intensity In a design build contract, the shipyard would shoulder the (Table 1). primary risk in meeting the underwater noise requirements.

In addition to the BC Ferries URN criteria, a Classi? ca- Unlike some other performance requirements, achievement of tion Society URN notation was also speci? ed; this ensured the URN contract requirement might not be possible to fully the contracted Class (ABS) was engaged in the URN design assess at the design stage. Once measurements are obtained process. during sea trials following construction, there may be little op-

Underwater noise targets are only one performance metric portunity for the shipyard to apply corrective solutions. Thus stated in the new ferry build requirements and needed to be the development of design tools (software and databases) is a considered in conjunction with BC Ferries’ other required critical element to achieve the program goals.

TABLE 1: Sound Pressure Levels measured in the Strait of Georgia during a typical day.