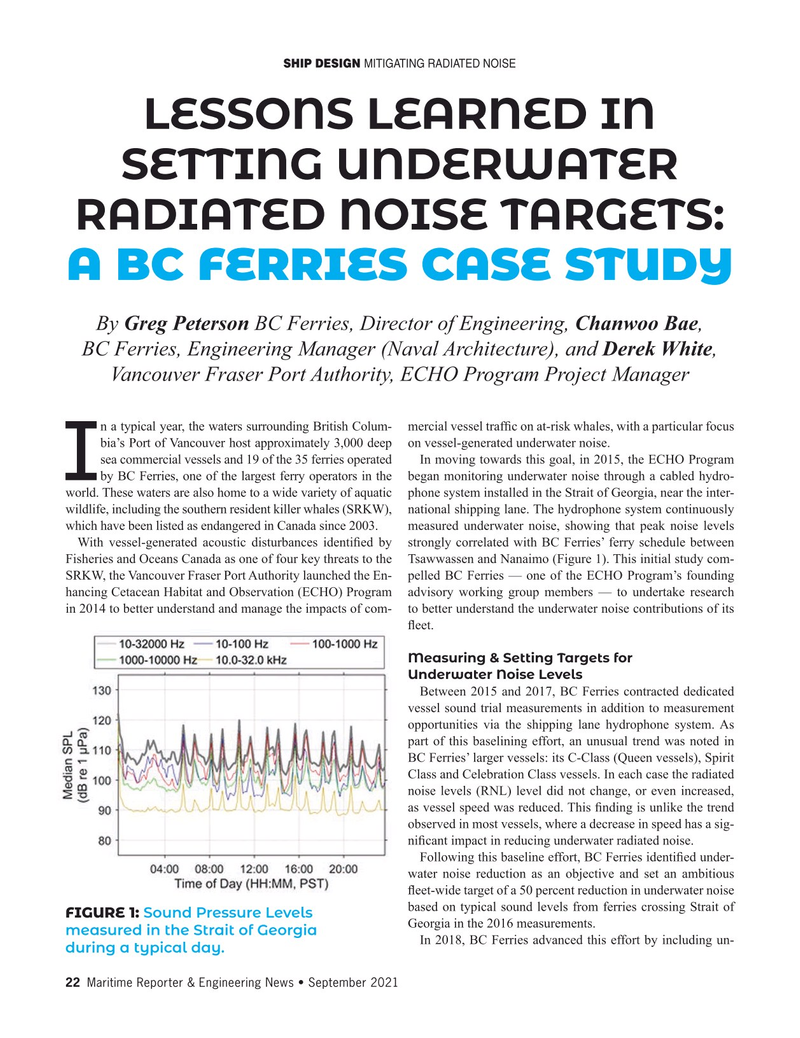 A BC FERRIES CASE STUDY

By Greg Peterson BC Ferries, Director of Engineering, Chanwoo Bae,

sea commercial vessels and 19 of the 35 ferries operated In moving towards this goal, in 2015, the ECHO Program

Iby BC Ferries, one of the largest ferry operators in the began monitoring underwater noise through a cabled hydro- world. These waters are also home to a wide variety of aquatic phone system installed in the Strait of Georgia, near the inter- wildlife, including the southern resident killer whales (SRKW), national shipping lane. The hydrophone system continuously which have been listed as endangered in Canada since 2003. measured underwater noise, showing that peak noise levels

With vessel-generated acoustic disturbances identi? ed by strongly correlated with BC Ferries’ ferry schedule between

Fisheries and Oceans Canada as one of four key threats to the Tsawwassen and Nanaimo (Figure 1). This initial study com-

SRKW, the Vancouver Fraser Port Authority launched the En- pelled BC Ferries — one of the ECHO Program’s founding hancing Cetacean Habitat and Observation (ECHO) Program advisory working group members — to undertake research in 2014 to better understand and manage the impacts of com- to better understand the underwater noise contributions of its ? eet.

Between 2015 and 2017, BC Ferries contracted dedicated vessel sound trial measurements in addition to measurement opportunities via the shipping lane hydrophone system. As part of this baselining effort, an unusual trend was noted in

Class and Celebration Class vessels. In each case the radiated noise levels (RNL) level did not change, or even increased, as vessel speed was reduced. This ? nding is unlike the trend observed in most vessels, where a decrease in speed has a sig- ni? cant impact in reducing underwater radiated noise.

Following this baseline effort, BC Ferries identi? ed under- water noise reduction as an objective and set an ambitious ? eet-wide target of a 50 percent reduction in underwater noise based on typical sound levels from ferries crossing Strait of

Georgia in the 2016 measurements. measured in the Strait of Georgia

In 2018, BC Ferries advanced this effort by including un- during a typical day.