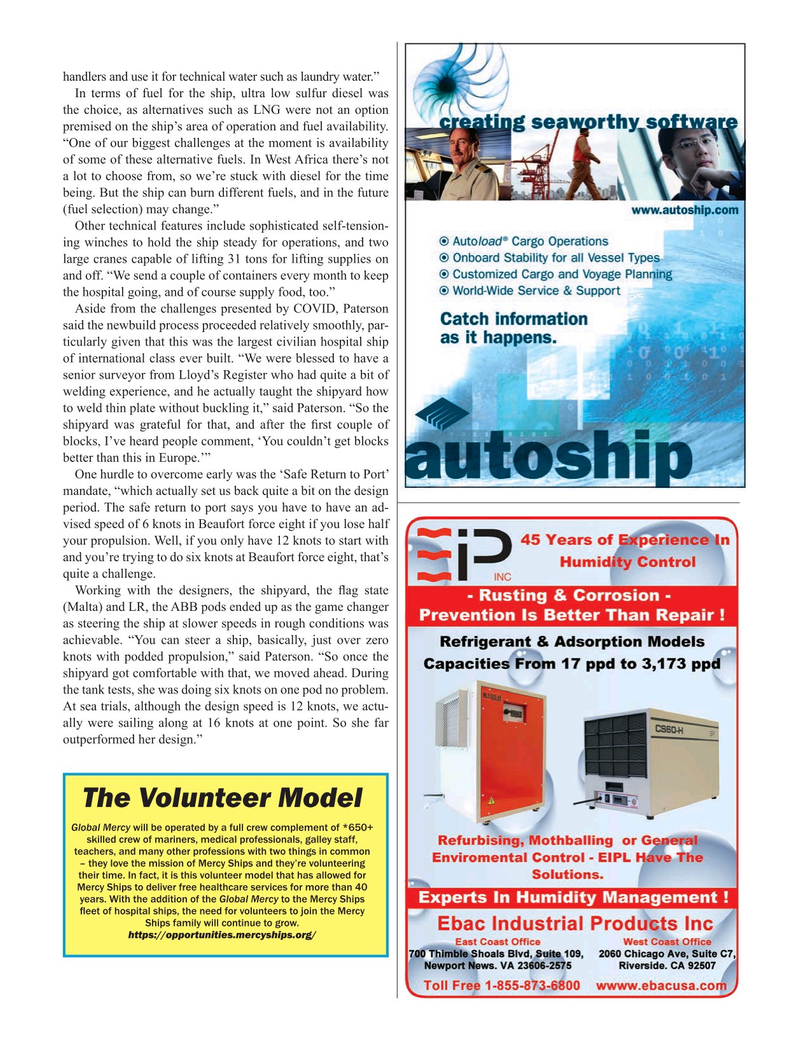 handlers and use it for technical water such as laundry water.”

In terms of fuel for the ship, ultra low sulfur diesel was the choice, as alternatives such as LNG were not an option premised on the ship’s area of operation and fuel availability. “One of our biggest challenges at the moment is availability of some of these alternative fuels. In West Africa there’s not a lot to choose from, so we’re stuck with diesel for the time being. But the ship can burn different fuels, and in the future (fuel selection) may change.”

Other technical features include sophisticated self-tension- ing winches to hold the ship steady for operations, and two large cranes capable of lifting 31 tons for lifting supplies on and off. “We send a couple of containers every month to keep the hospital going, and of course supply food, too.”

Aside from the challenges presented by COVID, Paterson said the newbuild process proceeded relatively smoothly, par- ticularly given that this was the largest civilian hospital ship of international class ever built. “We were blessed to have a senior surveyor from Lloyd’s Register who had quite a bit of welding experience, and he actually taught the shipyard how to weld thin plate without buckling it,” said Paterson. “So the shipyard was grateful for that, and after the ? rst couple of blocks, I’ve heard people comment, ‘You couldn’t get blocks better than this in Europe.’”

One hurdle to overcome early was the ‘Safe Return to Port’ mandate, “which actually set us back quite a bit on the design period. The safe return to port says you have to have an ad- vised speed of 6 knots in Beaufort force eight if you lose half your propulsion. Well, if you only have 12 knots to start with and you’re trying to do six knots at Beaufort force eight, that’s quite a challenge.

Working with the designers, the shipyard, the ? ag state (Malta) and LR, the ABB pods ended up as the game changer as steering the ship at slower speeds in rough conditions was achievable. “You can steer a ship, basically, just over zero knots with podded propulsion,” said Paterson. “So once the shipyard got comfortable with that, we moved ahead. During the tank tests, she was doing six knots on one pod no problem.

At sea trials, although the design speed is 12 knots, we actu- ally were sailing along at 16 knots at one point. So she far outperformed her design.”

Global Mercy will be operated by a full crew complement of *650+ skilled crew of mariners, medical professionals, galley staff, teachers, and many other professions with two things in common – they love the mission of Mercy Ships and they’re volunteering their time. In fact, it is this volunteer model that has allowed for

Mercy Ships to deliver free healthcare services for more than 40 years. With the addition of the Global Mercy to the Mercy Ships ? eet of hospital ships, the need for volunteers to join the Mercy