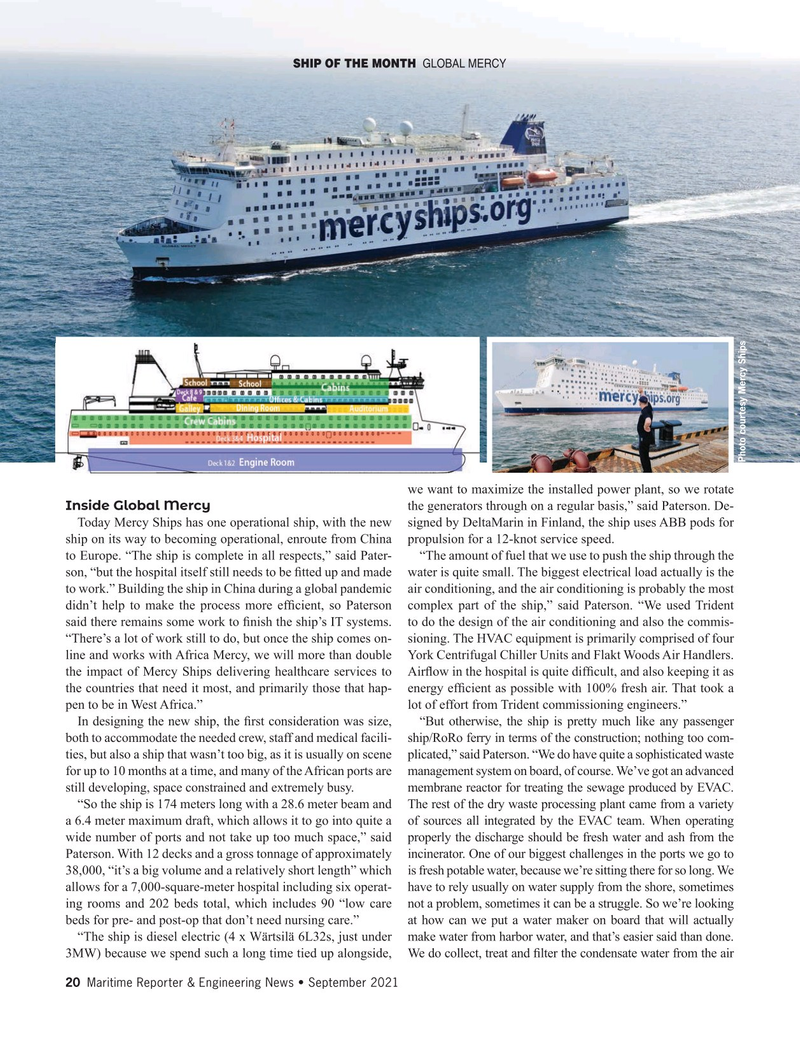 SHIP OF THE MONTH GLOBAL MERCY

Photo courtesy Mercy Ships we want to maximize the installed power plant, so we rotate

Inside Global Mercy the generators through on a regular basis,” said Paterson. De-

Today Mercy Ships has one operational ship, with the new signed by DeltaMarin in Finland, the ship uses ABB pods for ship on its way to becoming operational, enroute from China propulsion for a 12-knot service speed.

to Europe. “The ship is complete in all respects,” said Pater- “The amount of fuel that we use to push the ship through the son, “but the hospital itself still needs to be ? tted up and made water is quite small. The biggest electrical load actually is the to work.” Building the ship in China during a global pandemic air conditioning, and the air conditioning is probably the most didn’t help to make the process more ef? cient, so Paterson complex part of the ship,” said Paterson. “We used Trident said there remains some work to ? nish the ship’s IT systems. to do the design of the air conditioning and also the commis- “There’s a lot of work still to do, but once the ship comes on- sioning. The HVAC equipment is primarily comprised of four line and works with Africa Mercy, we will more than double York Centrifugal Chiller Units and Flakt Woods Air Handlers. the impact of Mercy Ships delivering healthcare services to Air? ow in the hospital is quite dif? cult, and also keeping it as the countries that need it most, and primarily those that hap- energy ef? cient as possible with 100% fresh air. That took a pen to be in West Africa.” lot of effort from Trident commissioning engineers.”

In designing the new ship, the ? rst consideration was size, “But otherwise, the ship is pretty much like any passenger both to accommodate the needed crew, staff and medical facili- ship/RoRo ferry in terms of the construction; nothing too com- ties, but also a ship that wasn’t too big, as it is usually on scene plicated,” said Paterson. “We do have quite a sophisticated waste for up to 10 months at a time, and many of the African ports are management system on board, of course. We’ve got an advanced still developing, space constrained and extremely busy. membrane reactor for treating the sewage produced by EVAC. “So the ship is 174 meters long with a 28.6 meter beam and The rest of the dry waste processing plant came from a variety a 6.4 meter maximum draft, which allows it to go into quite a of sources all integrated by the EVAC team. When operating wide number of ports and not take up too much space,” said properly the discharge should be fresh water and ash from the

Paterson. With 12 decks and a gross tonnage of approximately incinerator. One of our biggest challenges in the ports we go to 38,000, “it’s a big volume and a relatively short length” which is fresh potable water, because we’re sitting there for so long. We allows for a 7,000-square-meter hospital including six operat- have to rely usually on water supply from the shore, sometimes ing rooms and 202 beds total, which includes 90 “low care not a problem, sometimes it can be a struggle. So we’re looking beds for pre- and post-op that don’t need nursing care.” at how can we put a water maker on board that will actually “The ship is diesel electric (4 x Wärtsilä 6L32s, just under make water from harbor water, and that’s easier said than done. 3MW) because we spend such a long time tied up alongside, We do collect, treat and ? lter the condensate water from the air 20 Maritime Reporter & Engineering News • September 2021