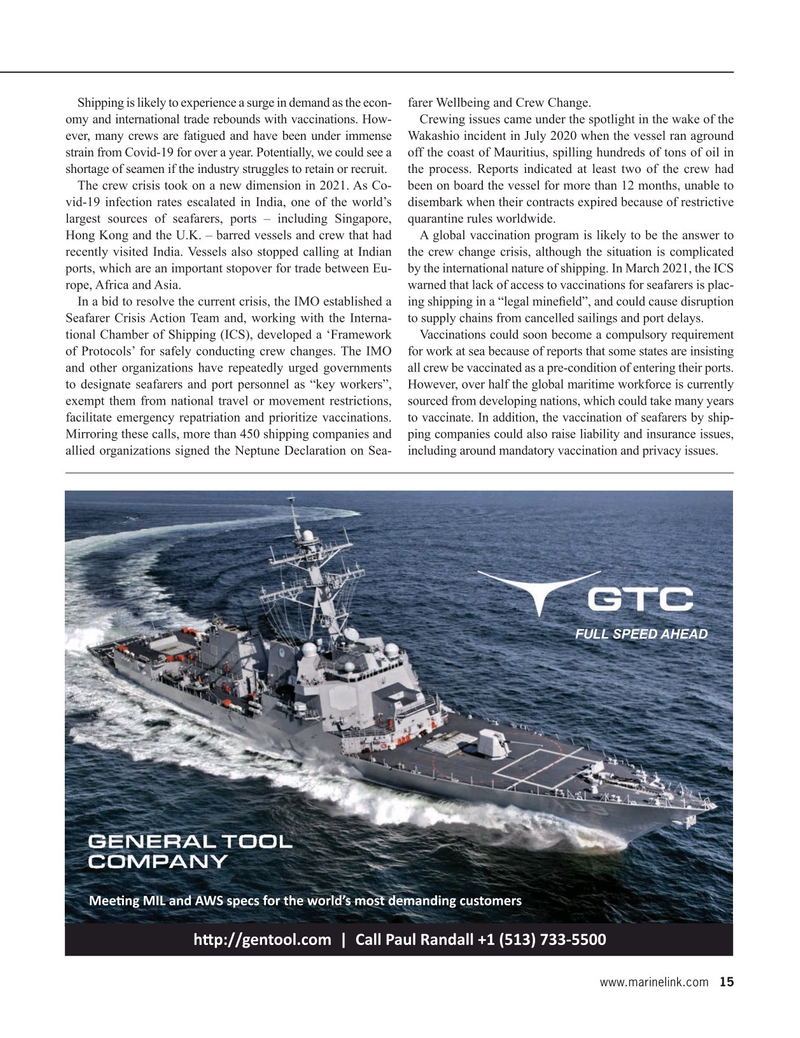 Shipping is likely to experience a surge in demand as the econ- farer Wellbeing and Crew Change.

omy and international trade rebounds with vaccinations. How- Crewing issues came under the spotlight in the wake of the ever, many crews are fatigued and have been under immense Wakashio incident in July 2020 when the vessel ran aground strain from Covid-19 for over a year. Potentially, we could see a off the coast of Mauritius, spilling hundreds of tons of oil in shortage of seamen if the industry struggles to retain or recruit. the process. Reports indicated at least two of the crew had

The crew crisis took on a new dimension in 2021. As Co- been on board the vessel for more than 12 months, unable to vid-19 infection rates escalated in India, one of the world’s disembark when their contracts expired because of restrictive largest sources of seafarers, ports – including Singapore, quarantine rules worldwide.

Hong Kong and the U.K. – barred vessels and crew that had A global vaccination program is likely to be the answer to recently visited India. Vessels also stopped calling at Indian the crew change crisis, although the situation is complicated ports, which are an important stopover for trade between Eu- by the international nature of shipping. In March 2021, the ICS rope, Africa and Asia. warned that lack of access to vaccinations for seafarers is plac-

In a bid to resolve the current crisis, the IMO established a ing shipping in a “legal mine? eld”, and could cause disruption

Seafarer Crisis Action Team and, working with the Interna- to supply chains from cancelled sailings and port delays. tional Chamber of Shipping (ICS), developed a ‘Framework Vaccinations could soon become a compulsory requirement of Protocols’ for safely conducting crew changes. The IMO for work at sea because of reports that some states are insisting and other organizations have repeatedly urged governments all crew be vaccinated as a pre-condition of entering their ports. to designate seafarers and port personnel as “key workers”, However, over half the global maritime workforce is currently exempt them from national travel or movement restrictions, sourced from developing nations, which could take many years facilitate emergency repatriation and prioritize vaccinations. to vaccinate. In addition, the vaccination of seafarers by ship-

Mirroring these calls, more than 450 shipping companies and ping companies could also raise liability and insurance issues, allied organizations signed the Neptune Declaration on Sea- including around mandatory vaccination and privacy issues.