Stena Bulk invests in the future, a future defined by decarbonization in the shipping sector. Erik Hånell, President & CEO, Stena Bulk discusses the plan, the path and the costs.

While the majority of shipowners still struggle to pick the technological path toward meeting emission reduction targets in the coming 30 years, one company, Stena Bulk which today has about 110 tankers (30% owned, 70% managed) generating about $1.4B in revenue annually, recently unveiled its roadmap toward decarbonization, a plan with targets and dates to serve as its guide to become a net zero business by 2050.

While the path is set, there are sure to be many course adjustments on the three decades journey as technology evolves and markets dictate.
Stena Bulk’s first ‘stake’ is in fact already in the ground according to Erik Hånell, President & CEO, Stena Bulk, as in 2020 the company began offering customers low-carbon shipping options with up to a 100% reduction of CO2 emissions. These options are based on the use of biofuels and an internal carbon emissions offsetting program, which allows the it to offer low-carbon options on any voyage, regardless of ports and specific ships used.

Next year Stena Bulk will launch the first of three planned carbon neutral-ready, methanol fueled vessels in collaboration with Proman, a ship that will also be able to be operated on VLFSO and is aimed to come into service 18 years ahead of Stena Bulk’s ambition to become one of the first carbon neutral vessel operators in the world by 2040. “From 2020 to 2030, we would not build a ship that cannot have an alternative fuel,” said Hånell. “We have another stake in the ground, which is 2035. That is when we say that we're going to build the InfinityMAX.” 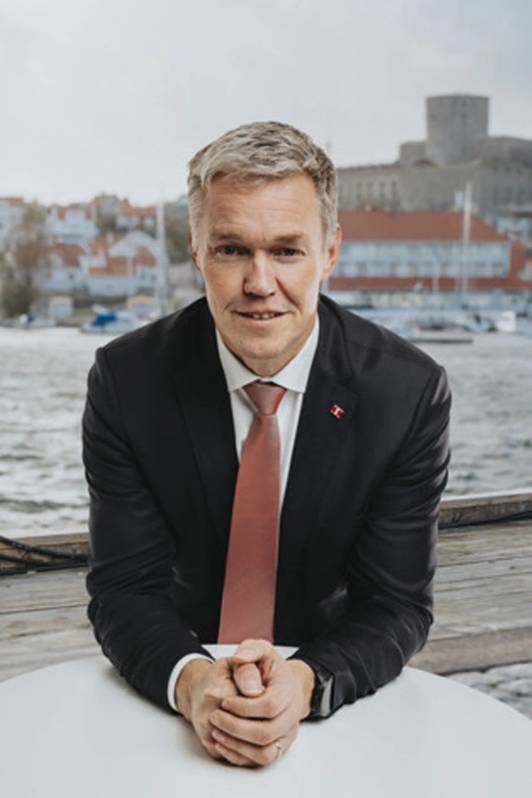 “If we look at our fleet today, a fleet that is built, you can say an average ship, 2015, roughly, we probably have to invest somewhere in between $5 to $6 million for each and every ship between now and 2030 to be able to reach our goals.”
Erik Hånell, President & CEO, Stena Bulk

The third milestone in Stena Bulk’s decarbonization’s journey comes hand-in-hand with the recently unveiled vessel design InfinityMAX concept, which is the company’s take on zero emissions, self-sufficient and flexible seaborne transportation. Stena Bulk aims to have a ship with a similar design to the InfinityMAX concept operating on the water by 2035 at the latest.

“That is a concept today, and my view is that we would probably build something similar to it, which means that it's going to be a ship that is carbon neutral,” said Hånell. “Then by 2040 our operation should be carbon neutral using zero emission ships, in combination with efficient ships and in combination with carbon emission trading. By 2050, we are then aiming to have a net zero business, using fuels produced by capturing carbon from other sources,” with all cargo carried by the Stena Bulk fleet to be climate neutral, too, which will become a shared responsibility between Stena Bulk and its customers.

The InfinityMAX hybrid bulk carrier concept is electric and modular, designed to enable sustainable, zero carbon, efficient and flexible seaborne transportation. The concept is designed to carry both dry and wet cargoes in modular compartments, and it is built with several new core principles that, according to Stena Bulk, cumulatively represent a paradigm shift in cargo transportation.
A key to this design was the creation of standardized and modular cargo units that can carry dry bulk, liquid bulk or liquified gas products, such as methane, hydrogen or ammonia, that is envisioned to significantly streamline the process of transporting wet and dry bulk cargoes.

Each of the InfinityMAX’s modular cargo units are designed to be self-sufficient in terms of their energy use, with wind turbines and solar panels generating all the electricity needed for internal systems. The modular units have also been designed to be able to be dropped off outside of ports and picked up by tugs, helping to ease congestion and reduce call times dramatically.

The InfinityMAX concept will use hydrogen as a marine fuel and wind turbines to generate further energy. Collapsible wing sails and a shark skin hull have also been incorporated in the concept design to significantly improve efficiency. Although the vessels will be crewed, Stena Bulk has designed the InfinityMAX concept to be semiautonomous.

While it is instructive to have a path charted, there remain many question marks in the coming three decades journey in terms of available and emerging technologies, not to mention the means to pay for it. Hånell sees emerging regulations as helping to add clarity to the path and ultimately to level the playing field. “If we look at our fleet today, a fleet that is built, you can say an average ship, 2015, roughly, we probably have to invest somewhere in between $5 to $6 million for each and every ship between now and 2030 to be able to reach our goals.”

“(Fuel) is, of course, the billion dollar question,” said Hånell. “We strongly believe in methanol as a potential future fuel going forward,” he said, noting its proven track record. “It comes down to making the methanol more environmental friendly.”

Looking toward 2050, the math and the path gets even fuzzier, and Hånell admits “Today, I would not even guess what it is going to cost to build a ship that is ready for 2050 and beyond. But to give a broad and a very rough estimate, we assume that with the technology that we see today and what we, how we believe it will be developed, it's going to be an additional cost of around the 30 to 40% compared with today's prices.”

On its best day the shipping industry is fraught with risk, and the collision of digitalization, decarbonization and autonomy is collaboratively speeding the transition of technology – and new risk – throughout maritime.

At the time Stena Bulk’s plan to 2050 was announced, Hånell said: “The shipping industry collectively faces a challenge where we must consider how we alter our entire energy needs. In order to decarbonize, the maritime community must take risks, push sustainability boundaries, and embrace a partnership approach that enhances collaboration between industry partners and customers.”

In his interview with Maritime Reporter TV Hånell added clarification: “The risk here, to a very high degree, is the financial risk. It's going through something new that is probably a little bit untested, and that is the risk that I think shipowners like to share with suppliers and customers.”
It is broadly agreed that achieving true decarbonization will require an unprecedented level of cooperation and partnership throughout the maritime and logistics chain.

“We feel it's more important than ever to build on what we have, while also finding new partnerships,” said Hånell. As an example, he points to a growing partnership in the development and delivery of the aforementioned three planned carbon neutral-ready, methanol fueled vessels. “We have a new relationship with Proman, the second biggest methanol producer in the world. That’s something that we believe in, in respect of a sustainable way going forward when it comes to fuel.”

But mot all partnerships are external, and Hånell points to the depth and breadth of the Stena brand. “We have our sister company in Stena Line on the ferry side, where we are cooperating with them as well.”

Ultimately, Hånell see decarbonization as a global problem that requires a global-sized solution, including cooperation among traditional and new technology stakeholders and regulators.

“(Big or small), all ship owners have to work with this,” Hånell concludes. “Collaboration between everybody as much as possible (is ideal), making sure that we are working together in a global sense.” 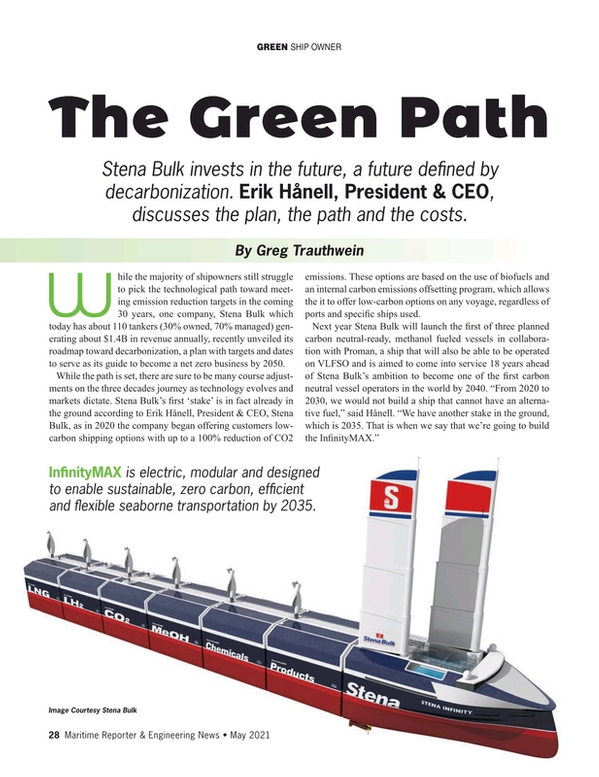 Other stories from May 2021 issue