There are many hallmarks of great civilizations, but perhaps none so universal as their desire to push the boundaries of human achievement through innovation. A key source of American pride has always been our ability to dream big. When it comes to ships, there is no more powerful example of this than the SS United States.

“America’s Flagship” was more than a symbol of our nation’s post-war strength and global reach. She remains a singular and unrivaled marine engineering and design achievement.

Curiously, one writer on the pages of this publication (Great Ships and the Ship Designer’s Curse, by Rik van Hemmen) recently felt compelled to claim that the vessel that bears her nation’s name was merely “an emotional fabrication,” “nothing special” and a “white elephant.” The writer also took a gratuitous shot at the ship’s designer William Francis Gibbs, the preeminent American naval architect of his time.

Such a cavalier dismissal of this historic maritime achievement not only runs contrary to basic facts about the ship’s storied history but does a disservice to the profound vision of those who labored for decades to design the most advanced vessel built in America up to that point.

Van Hemmen notes that, “with very few exceptions, in their own lifetime, ship designers get to see the disassembly of most of their creations.” In fact, Gibbs, was an exception. His “Perfect Ship” long outlived him and remains afloat today, over 50 years after being decommissioned.

The SS United States was the largest passenger vessel ever built in America. With the participation of companies from all 48 states in the union, her construction was a truly national effort that brought the best and brightest minds together in the days before the jet age. As Secretary of Commerce Charles Sawyer said in 1952: “This ship is truly First Lady of the Seas. No other passenger ship ever built is so beautiful, so fast, so safe, so useful.”

Designed as part of a Top Secret Pentagon program to build the fastest ship on earth, the SS United States could be converted from luxury ocean liner to troop transport carrying 14,000 troops over 10,000 miles without refueling. The ship’s 240,000-horsepower engines were the largest powerplant ever installed in a passenger liner. Her long-classified top speed was generated by tandem four and five blade propellers, designed and fitted under tight security to avoid detection by the Soviets. Her high-temperature, high-pressure dual engine rooms were designed to Navy Standards and were also Top Secret. Thanks to her innovative compartmentation, she would have survived the collision that sunk the RMS Titanic. Among the SS United States’ more than one million passengers on her 400 voyages were Presidents, heads of state, A-list Hollywood stars too numerous to mention, tourists and immigrants to our shores. She had a flawless service career with an on-time percentage of 99.5%.

The ship’s fittings reflected the height of mid-century modern art and design. The vessel incorporated a host of technological “firsts”. She was the first ship fully air conditioned in all public spaces and staterooms. She was the first vessel to use microwave ovens and was the first commercial application of tempered glass. Many new products and materials, from paints to flooring to fabrics were custom designed to surpass all fireproofing standards of her time.

To save weight, the United States was the first to use an innovative new process to fuse the all-aluminum superstructure with a battleship-grade, two-inch-thick steel hull. The use of aluminum in her design was unprecedented in any structure until the construction of the original World Trade Center towers. Her lifeboats were the first to be made of aluminum and also fully fireproof.

The hull’s sleek design was the first to be put through aerodynamic testing, and her watertight subdivisions were also unique and set a new standard for safety. Her rakish hull form generated virtually no wake, evocative of the sleek racing hulls of the clipper ships.

On her fabled maiden voyage, she smashed the transatlantic speed record in both directions using only two-thirds of her power. This triumph was a tremendous source of American pride that made headlines the world over. It is a record she still holds and most likely always will. No ship before or since was feted with a ticker tape parade down New York’s ‘Canyon of Heroes.’

A vessel the size of the Chrysler building moving at the equivalent more than 40 miles per hour across the North Atlantic is an exhilarating engineering achievement that anyone who dedicates themselves to designing, crewing or commanding ships can appreciate. For passengers and onlookers at ports around the world, the SS United States’ red, white and blue funnels heralded the arrival of not just another ship, but a symbol of her namesake nation, a post-war superpower making a splash on the world stage.

The SS United States Conservancy saved the ship from certain destruction when it purchased the vessel in 2011. Since being withdrawn from service in 1969, the ship has been the focus of numerous books, articles, works of art and documentary films. The breadth and depth of this attention is a testament to the ship’s unique hold on the historical imagination. The Conservancy has grown the ship’s global community of supporters and attracted strategic partners who believe she deserves as future as bright as her storied past. Together the effort to save America’s Flagship is real and progressing

More than any other vessel, the SS United States remains a symbol of American resilience. She has stood the test of time. The plans being advanced for her potential rebirth as a vibrant stationary mixed-use destination are as visionary as those that created her.

Even at her current Philadelphia pier as she awaits restoration, this “Lady in Waiting” reflects the very best of what our nation can achieve. The SS United States should be on any list of ships to be prioritized for preservation. She has waited long enough. Now, her fate is up to us.

Find out more about the SS United States Conservancy here. 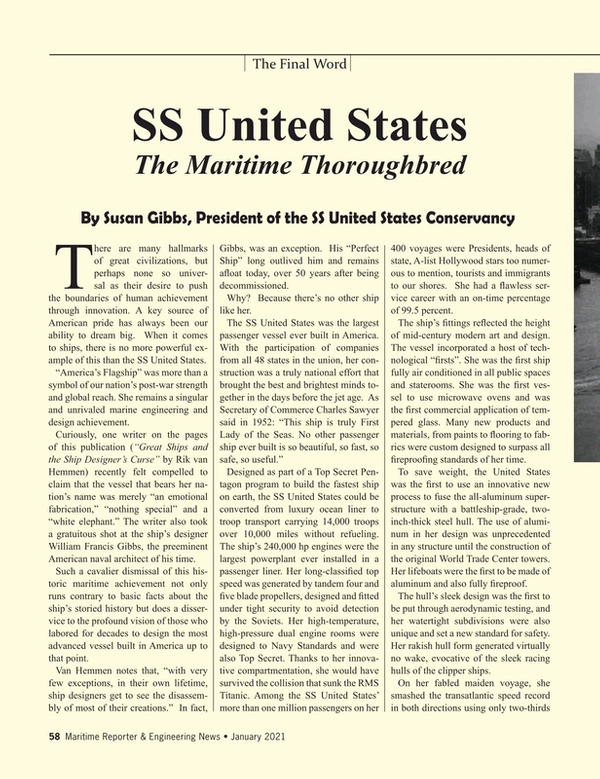