IMO
IMO has adopted guidelines and applicable IMO Code amendments for the mandatory carriage of damage stability verification instruments onboard new and existing tankers. Amendments to MARPOL Annex I, BCH Code, IBC Code, IGC Code and to the Survey Guidelines under HSSC to mandate the provision of a computer program capable of calculating the applicable damage stability requirements were agreed. The approval generally applies to the software, but may include hardware, for example, when the instrument receives input from sensors for the contents of tanks.

The Issue
All tank vessels on international voyages must meet the International Maritime Organization’s (IMO) requirements for damage stability. These regulations are contained in the MARPOL Convention for general purpose tankers, the IBC and BCH Codes for bulk chemical carriers, and the GC and IGC for gas carriers.

In 2005 several Port States, led primarily by the UK’s  Maritime and Coast Guard Agency (MCA), recognized that many tank vessels had onboard documentation to demonstrate compliance with these damage stability requirements only when the ships were loaded in accordance with the ships standard loading conditions in the approved Stability Booklet or Loading Manual. However, during actual operations many tank ships are loaded to conditions which significantly differ from these standard loading conditions. A survey by the MCA indicated that “more than 50 percent of vessels are operating in conditions which are not in the approved Stability Information Booklet.”

In 2010 the Paris Memorandum on Port State Control carried out a Concentrated Inspection Campaign to verify correct damage stability on oil tankers, chemical tankers and gas carriers. The reasons for this Concentrated Inspection Campaign included that inspections showed tankers frequently sailing when not complying with damage stability requirements or had no means of assessing damage stability or were sailing in a loading condition not covered by the approved Stability Booklet or Loading Manual. The Concentrated Inspection Campaign Report stated; that a significant number of tankers during a “spot check” could not show compliance with stability requirements and thus may pose a risk to the environment. It is generally understood that since most tank vessels use computer programs to evaluate stability and strength for any loading condition, there no longer is a practical incentive to stay with the standard loading conditions.

Special Dispensation
The Flag Administration may give special dispensation from the provisions of a stability instrument in the following instances:
•    tankers where stability is remotely verified by a means approved by the Administration;
•    tankers on a dedicated service, with a limited number of permutations of loading such that all anticipated conditions have been approved;
•    tankers which are loaded within an approved range of loading conditions; and
•    existing tankers provided with approved limiting KG/GM curves covering all applicable intact and damage stability requirements.

The Administration should take into account the Guidelines for the approval of stability instruments(MSC.1/Circ.1229) when reviewing them.

Stability software should be approved, but hardware approval is not mandatory and can be covered by national standards.

Commentary on Compliance
Limiting the number of loading permutations or range of loading is not a practical operational restriction for many, if not most, tank ships. Practical reliance on gaining voyage specific approvals on a timely basis may also be a burden to both the operator as well as the national administration, and may limit operational flexibility.

Many ships are currently operating effectively and safely, using approved limiting KG/GM curves, covering all applicable intact and damage stability requirements. For this type of system the limiting KG (or required GM) curves vs. draft are pre-developed and pre-approved, and would typically be added to both the Stability Booklet and the loading computer. This would normally insure compliance with both the damage stability and intact stability requirements. However, in practice, these curves are complicated and expensive to produce, and also have other application and enforcement concerns as noted in MSC 82/18/3, “because of the need to consider all possible loading and damage combinations and any associated limiting provisions such as tank filling ratios. The resulting stability books may be complex and not easily applied by ships’ officers and Port State control inspectors”. For these reasons Herbert-ABS Software Solutions LLC (Herbert-ABS), generally does not recommend this approach.

The best practical solution is to fit onboard damage stability verification instruments on all tank vessels as required. A direct damage stability loading instrument provides a solution that will make it easy to demonstrate compliance with the damage stability requirements to the Port State authorities for any cargo or ballast distribution.

Loading computer programs with this feature are generally referred to as “IACS Type 3 Loading Instruments” as specified in IACS URL 5 (applicable for new buildings since July 2005), which define Type 3 as “software calculating intact stability and damage stability by direct application of preprogrammed damage cases for each loading condition.”

Herbert-ABS’ CargoMaxTM loading computer with the Direct Damage Stability (DDS) module fully meets the requirements of IACS URL 5, Type 3, for any type of tank vessel. It demonstrates compliance with the damage stability requirements for any of the relevant regulations from IMO and national administration for any type of loading or ballast loading. It can also be used to demonstrate this compliance to Port State inspectors or vetting surveyors.

Pre-existing Onboard Software
Loading computer software previously approved for stability can be classified as one of three types as defined by IACS UR L5:

Introduction:
The great majority of bulk carriers are designed to the reduced B-60 freeboard, Type B freeboard, minus 60 percent of the distance to the Type A freeboard.  With this reduced freeboard, the ICLL66 convention, Reg, 27, requires compliance with a fairly conservative damage stability standard only at the summer loadline draft.  These regulations specify a 1-compartment damage, with the holds loaded at their 100 percent homogeneous load VCG, and a permeability of 0.90.  This is usually considered by a ‘design only’ requirement and once the damage analysis for all 1-compartment damage is met for this design case, operationally, the ship is not required to meet any damage stability requirements.

There are two other interesting cases where other damage stability regulations apply:

Bulk Carriers with Type B Freeboards
Type B ships constructed before February 1992 were not required to meet any damage stability standards. However, all Type B ships constructed after February 1992 are required to meet the SOLAS Ch. II-1, Part B-1 probabilistic regulations, unless they are covered by other regulations (such as Reg. 27 of the ICLL).

It should be noted that ships meeting ICLL Reg. 27, the B-60 freeboard ships, are exempt from the new Reg. 4 requirements, so this essentially only applies to the minority of bulk carriers with only Type B freeboards.

The Reg. 4 requirements were originally considered to be a ‘design only’ requirement, in order to fulfill the obligation of producing a design study to demonstrate compliance with Reg. 4, which included damage of each individual cargo hold (at a permeability at 0.90), at the loadline draft, at a GM of 0.40m, and a range of trims. This was not recommended by class and they commented as follows:

“Separate design calculations in accordance with SOLAS Reg. XII/4 are not recommended as it may introduce trim limits not defined by the designer/shipyard. Please note that the underlying principle is that the loading computer software shall reflect the required onboard documentation.

In compliance with classification society recommendations, the “Bulk Carrier DDS” was put to use, which includes a direct damage stability simple run through damage cases for each bulk cargo hold to verify compliance with Reg. 4 damage stability, thereby meeting the ICLL Reg. 27 stability standard. This procedure has been implemented in CargoMaxTM and when required done simultaneously with the S17 hold flooded strength calculations.

Bulk Carriers with Type B-60 Freeboards and Deckloads
Since bulk carriers with deckloads can have a VCG even higher than the conservative 100 percent full homogeneous CG required by ICLL Reg. 27, these damage requirements are considered to be inadequate and need to be supplemented by the SOLAS B-1 probabilistic requirements, see IACS LL65.

The B-1 probabilistic requirements are generally considered less conservative than the Reg. 27 deterministic requirements. Nonetheless, attention needs to be paid to provision 4 of IACS LL65, which states:

This means that even if the B-1 calculations with a higher VCG (lower Req. GM) are met, the relatively conservative VCG (high GM) from the Reg. 27 calculations at the deep waterline must still be used. In essence this stipulates that since ships cannot have cargo with a VCG higher than the homogeneous cargo hold, they are prevented from having any significant deckload at the deep waterline. Depending on the Partial Draft Req. GM to meet the B-1 damage requirements, ships can get progressively more deckload at lighter and lighter drafts.

Class has conceded that the Reg. 27 calculations might be easily met for some ships, and the ship in question could meet the ICLL damage stability criteria with a cargo VCG even higher than the homogeneous fully loaded holds. In this case class states:

“Redoing the ICLL Reg. 27 calculation with a lower GM (higher VCG) than required by the standard initial condition in order to use this lower GM for the subdivision draft GM in the probabilistic calculations is an acceptable solution.”


The Author
Hendrik Bruhns, Naval Architect, President of Herbert-ABS Software Solutions LLC. Previously he headed the Stability Department of Germanischer Lloyd and has participated in and chaired numerous Committees at IMO.
e: hbruhns@herbert-abs.com

(As published in the December 2015 edition of Maritime Reporter & Engineering News - http://magazines.marinelink.com/Magazines/MaritimeReporter) 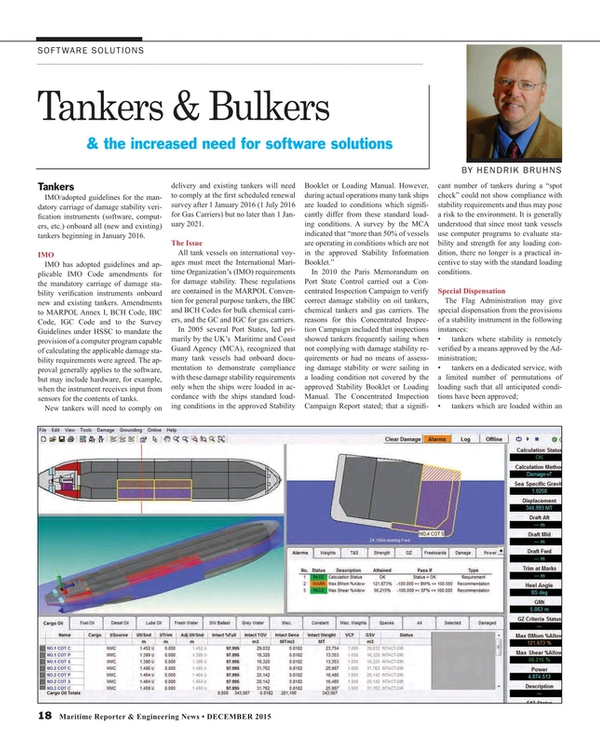 Other stories from December 2015 issue