Since then Maritrans has successfully rebuilt three similar size barges and is currently working on a fifth that includes a 60-ft. lengthening. Maritrans patented barge process was described in detail in our earlier article.

As is shown in Figure 2. an inner bottom and double side is built upon the existing single hull structure.

(Red is new and blue is existing.) New lower bulkheads are also constructed. The existing deck and upper bulkheads are returned in such a fashion as to create a raised trunk to retain the original cargo volume.

Maritrans learned a great deal from its barge rebuild program in terms of pre-measurement. modularization.

Now the company is ready to apply these lessons to an even greater challenge: rebuilding tankers.

Maritrans has completed the contract design for double hull rebuild of its two diesel tankers. M/V Allegiance & M/V Perseverance. There are many similarities to the barge rebuild program, but also some important differences. The new inner bottom structure can be laid directly on top of the existing structure. The tanker internal structure is already high enough to meet the required spacing between hulls. On the barges, it is necessary to build up to get the necessary spacing between the hulls. The double sides are built on the outside (Figures 3 & 4 - See Illustrations on page 24).

For newer single hull MARPOL tankers (which are the most likely to be rebuilt), the cargo volume lost in the new inner bottom ballast tanks is more than offset by the gain in cargo volume by converting the existing segregated ballast tanks back to cargo (Figure 5).

Let's look in more detail at the tanker rebuild process for which a patent is pending: In Figure 6, brackets and portions of bulkhead are cut free. The brown colored parts will be modified and reused.

The red colored parts can be discarded. For this study, access is from the side, but top access is a design option. Next, the new inner bottom plate is laid on top of the existing transverses. The panel stiffening is inside the cargo tank that eases assembly, but still results in far less obstructions in way of cargo than a single hull. In Figure 8. the inner bottom plating is completed, the modified brackets are re-installed, and a new corner piece is placed where the previous turn of the bilge was. Finally, the original turn of the bilge including the stiffening and bilge keel, is installed exactly two meters further outboard from its old position.

The double side module is then installed above the relocated turn of the bilge. Figure 9 shows the side module installation and Figure 10 shows the completed newly double hull tanker midship section.

The cost of the tanker rebuild process is a quarter to a third of the price of newbuilding that includes a generous allowance for upgrades. Both OPA-90 and IMO Regulations specifically state that double hull rebuilding is not a major conversion. Therefore the owner's costs are much reduced compared to other conversion processes that increase the cargo volume. Because the added buoyancy exceeds the weight of new steel, the same weight of cargo can be carried at substantially less draft than before rebuild- a clear advantage in draft-limited service.

What about speed loss? Maritrans and Lloyd's Register have completed extensive hull modeling studies using Computational Fluid Dynamics (CFD) backed up by model basin testing. They have carefully designed fairing pieces for Maritrans' two vessels that hold the speed loss to only about one half knot.

As can be seen in Figure 13. Maritrans and Lloyd's Register were able to achieve remarkable correlation for the bow wave between model and CFD prediction.

They also made major breakthroughs in resistance prediction.

a problem for CFD in the past.

More detailed information on Maritrans/Lloyd's CFD work will be presented at the Royal Institute of Naval Architects forum on double hull design February 25- 26, 2004, in London. Maritrans is working with partners overseas to license this tanker rebuild technology for other interested owners. 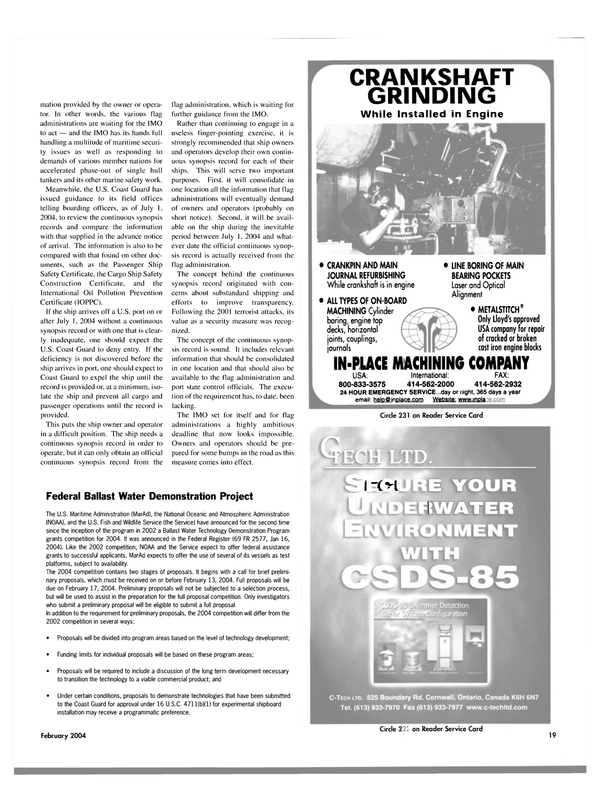