Though some industry insiders predict a slow-down in the ordering of Articulated Tug-Barges for the near term, there is little doubt the innovative unit have left an indelible mark on the U.S. oil product transportation business for a generation.

Company (STUSCO) christened both the tug and barge.

The Coastal Reliance/550-4 is the second of two similar units on time charter to STUSCO. Both units currently trade on the U.S. West Coast.

"We are pleased to officially place the fourth new ATB into service," said Steve Collar. Vice President. Business Development for Marine Transport. "We are equally proud of the fact that this ATB will serve STUSCO. one of outmost valued and respected customers." Already in service are the Sea Reliance/550-1, the Sound Reliance/550-2 and the Ocean Reliance/550-3. "All four new ATBs have been integrated into the Marine Transport fleet and are performing very well." Collar said. The essential difference between the newly constructed ATB's and the traditional West Coast tug and barge unit is the method of attachment.

The ATB tug is attached to the stern notch of the barge with an Intercon coupler system allowing the tug to push the barge at sea versus the traditional means of towing the barge at sea. The primary benefit of the ATB configuration is greater speed. 12 knots versus seven to nine knots, higher fuel efficiency and greater handling capability. The Intecon coupler system provides a single degree of freedom allowing the tug to pitch about a transverse connection between the tug and barge. All other motions are restrained so that the tug motions match barge motions in roll and heave. The ATB tank vessel incorporates the latest advances in environmental protection and safety while providing increased efficiencies in hose handling, anchoring, mooring, discharge and loading of product. The 550-4 is double hulled and the tug is double sided.

The barge, built, documented and maintained to the requirements of ABS SafeHull, has an inert gas system as well as an enhanced cargo system and a fully redundant ballast system. The Coastal Reliance meets all SOLAS (Safety of Life at Sea) and ABS criteria, and has a foam capable fire monitor; twin fuel efficient, reduced emission electronic diesel engines; a noise reduction package and other upgrades to increase crew comfort. And the communication and navigation equipment is among the most technologically advanced in the industry today. 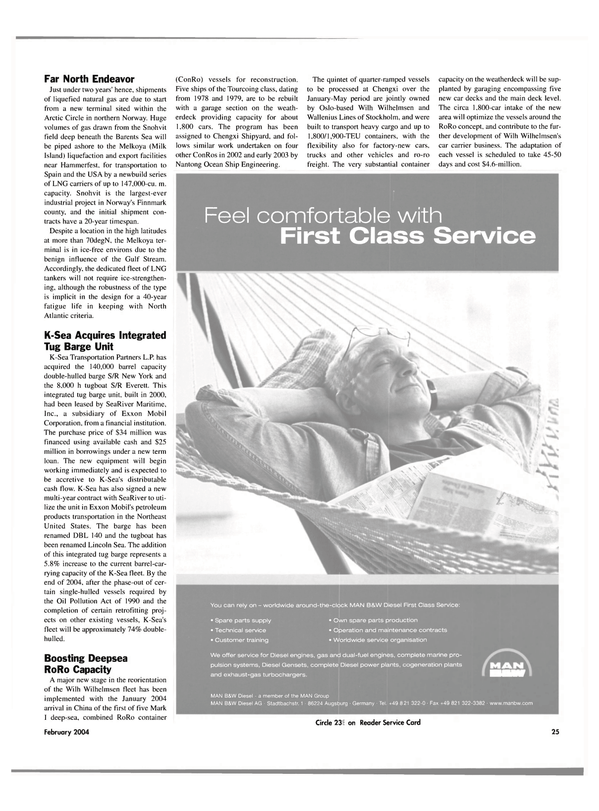