Bollinger Shipyards, Inc. last month delivered the latest in a line of innovative vessels — and the first of Bollinger's new 220 'super shelf series.

The boat was designed via a joint effort of Bollinger, MNM and other Bollinger customers, to produce a high cargo capacity offshore support vessel (OSV) that can operate on and off the U.S. Continental Shelf without many of the construction expenses and operational considerations of OSVs that work in deeper water at greater distances.

"It can carry as much or more as some 230-ft. OSVs," said Scott Theriot, executive vice president new construction of Bollinger, "and because of her design, she can work on and off the shelf and can access oil and gas well installations in shallow water as well as deep water locations. The 220 series is a natural follow-on to our 145 (44.1) and 166-ft. (50.5-m) classes of supply boats that have capacities of much larger OSVs, proving that less can be more." "Ms. Sara Jane's liquid mud tanks can carry over 6,000 barrels of drilling mud and her dry bulk tanks are able to carry over 6,000 cu. ft. of material. It has three separate pump systems that can handle three different liquid mud products without danger of contamination. All pump systems valves can be operated through a central control system in the pilot house that also controls the boat's ABS class DPI dynamic positioning system." Power is provided by twin Caterpillar 3516D diesel engines developing 2,000 hp through Reintjes reduction gears with a ratio of 6.44:1, a package that delivers a sustained 11-knot speed. They drive Bollinger 102-in. propellers and independent rudders. Electrical power is produced by two Caterpillar 3408 diesels generating 370 kW each.

Brunvoll 700 hp and 400 hp bowthruster and stern thrusters, respectively, ease maneuverability. Bowthruster noise is reduced by a Sound Down noise damping system. "The Ms Sara Jane has already exceeded our expectations on her first job by surpassing the specified cargo carrying capabilities. Bollinger has designed a vessel that provides operator cost effective equipment that has already exceeded the demands of our offshore clients," said Joey Areeneaux, president of C&G Boats. Inc, said.

Bollinger has contracts for seven more of its new 220 series in addition to the two for MNM Boats. 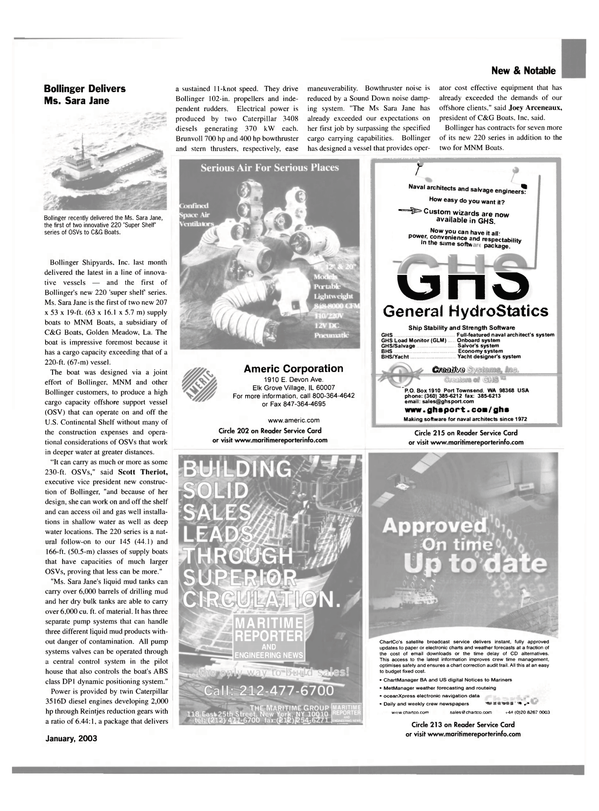