American West's Sternwheeler Will Be Built By Nichols Bros.

Nichols Brothers Boat Builders has been selected to build the Empress of the North, a 360 x 60-ft. (109.7 x 18.2- m) sternwheeler that will be the Whidbey Island, Wash, yard's largest singleboat contract. The vessel, which will accommodate 236 overnight cruise guests and 84 crewmembers, will be utilized for cruises in season in southeast Alaska and the Columbia/Snake River complex. Reportedly, the Empress will be the first sternwheeler on the Inside Passage in more than 100 years.

With construction and outfitting costs reportedly expected to exceed $50 million, MarAd will provide a loan guarantee to facilitate funding of the project.

Guido Perla & Associates designed the "Empress, which is said to be a "stretched" version of the "Queen of the West, a sternwheeler now operated by American West Steamboat on Columbia and Snake River Cruises. Nichols Bros.

also built this vessel, which went into service in 1995.

The Empress will be delivered by May 2003 in time for a full Alaska cruise season, and it will be repositioned to Portland, Ore., in September for inaugural cruises on the Columbia, Snake, and Willamette rivers to begin the three-year celebration of the Lewis & Clark Bicentennial.

An all-diesel-electric vessel, basic power for the vessel will be supplied by four 1,800-rpm Caterpillar 3516B diesel engines with KATO generators putting out 1,825 kW each. The service generator will consist of an 1,800-rpm 3406 Caterpillar diesel with a 315 generator.

Matt Nichols, president of the shipbuilding firm, said that all engines will meet regional and International Maritime Organization (IMO) emissions and antipollution standards.

Another 1,000-hp GE motor will supply electricity to a Schottel jet pump bow thruster. Service speed of the vessel at full load draft is expected to be 14 knots.

The vessel was designed in accordance with American Bureau of Shipping (ABS) Rules for Building and Classing passenger vessels intended for service on coastal routes. The design draft will be 12 ft. (3.6 m) with a full load draft of 12.5 ft. (41 m) Depth to the main deck amidships will be 20 ft. (6 m); an air draft from the design load waterline to the crown atop the wheelhouse will measure 52 ft. (15.8 in). The vessel, which will be under 250 gt, will have a displacement at design draft at an estimated 3,614 long tons; at full load draft, 3,812 long tons. Capacities include 75,350 gallons of fuel oil at 96 percent and 57,154 gallons of fresh water at 100 percent. 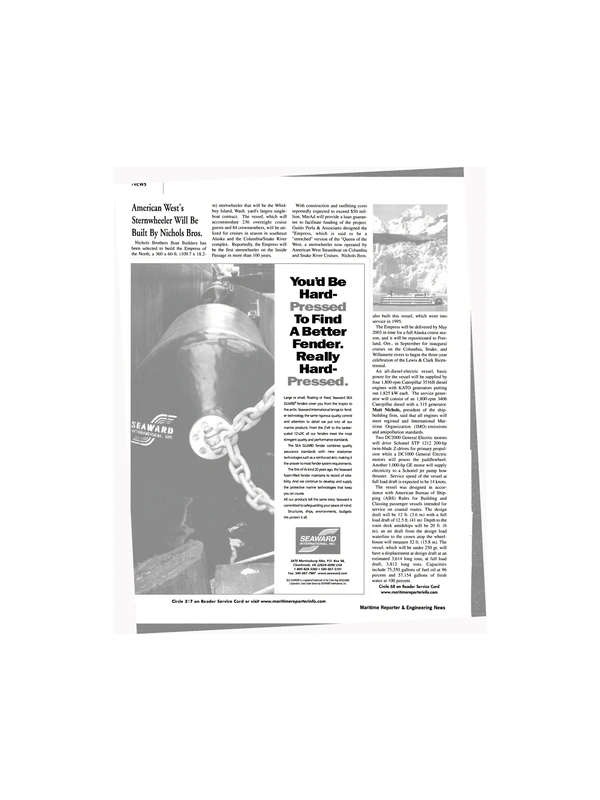 Read American West's Sternwheeler Will Be Built By Nichols Bros. in Pdf, Flash or Html5 edition of February 2002 Maritime Reporter

Other stories from February 2002 issue