Flender Werft christened it new floating drydock with a nominal lifting capacity for ships up to 20,000 tons dwt (max. 23,000 dwt). The company said that the unit will replace the shipyard's largest dock (16,000 tons), which is reportedly being sought by a buyer in Dunkerque, France. This expansion of the yard's drydocking facilities allows it to partake in the new trend in Baltic shipping, which is leaning toward larger ships.

yards in 1967. The conversion will transform it from a conventional general cargo ship into a fully-equipped training ship for 600 passengers.

The cargo ship is currently configured with six holds to carry various breakbulk and cargoes. Hold number four will be converted into quarters and auxiliary machinery for services such as potable water and air conditioning. Hold number five will have new refrigerated and dry storage storerooms and workshops installed, and two cargo oil deep tanks will be converted for potable water storage.

Hold number six will be changed into a laboratory and classroom area.

Although the ship's existing steam propulsion plant will remain, an auxiliary machinery space will be created in the number four cargo hold, centered around a new Wartsila 8L20 medium speed, heavy fuel diesel generator. This space will be equipped and arranged to simulate a modern diesel propulsion plant. 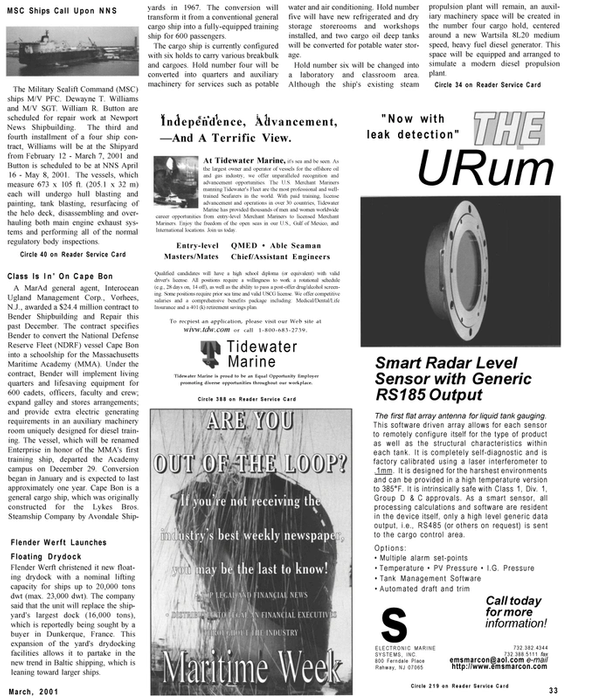 Other stories from March 2001 issue