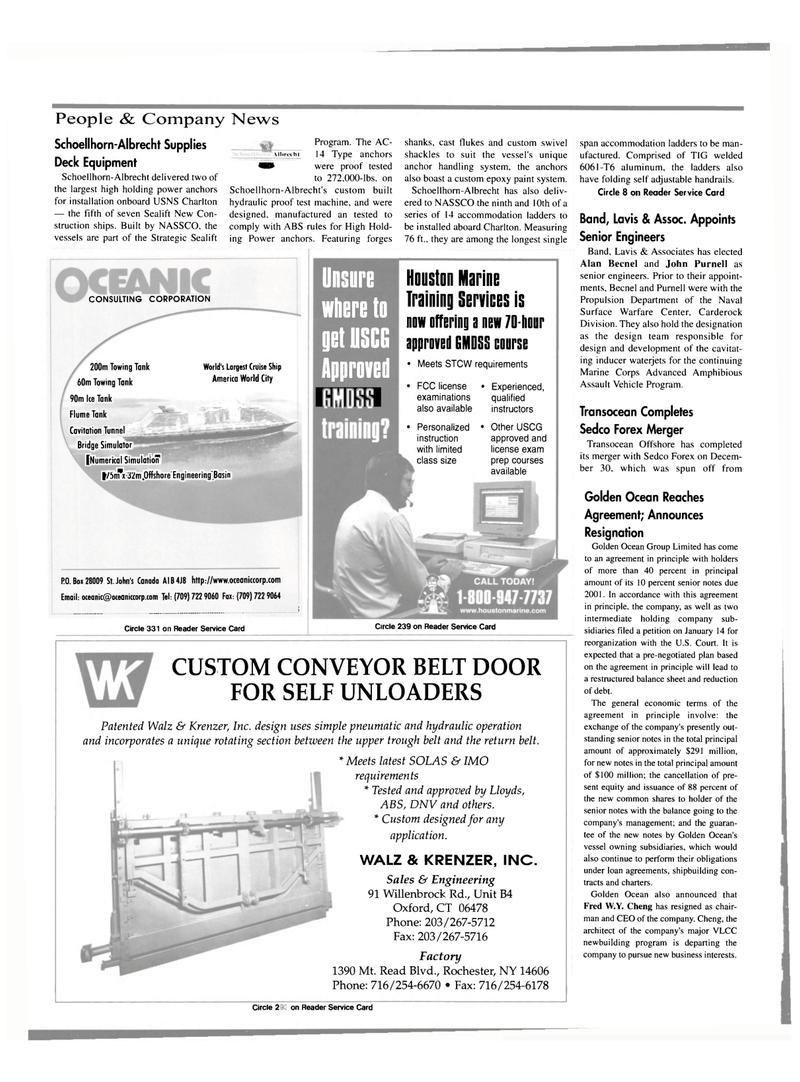 Schoellhorn-Albrecht delivered two of the largest high holding power anchors for installation onboard USNS Charlton — the fifth of seven Sealift New Con- struction ships. Built by NASSCO. the vessels are part of the Strategic Sealift

Unsure where to get IISCG

Schoellhorn-Albrecht has also deliv- ered to NASSCO the ninth and 10th of a series of 14 accommodation ladders to be installed aboard Charlton. Measuring 76 ft., they are among the longest single

Alan Becnel and John Purnell as senior engineers. Prior to their appoint- ments, Becnel and Purnell were with the

Propulsion Department of the Naval

Division. They also hold the designation as the design team responsible for design and development of the cavitat- ing inducer waterjets for the continuing

Transocean Offshore has completed its merger with Sedco Forex on Decem- ber 30, which was spun off from

The general economic terms of the agreement in principle involve: the exchange of the company's presently out- standing senior notes in the total principal amount of approximately $291 million, for new notes in the total principal amount of $100 million; the cancellation of pre- sent equity and issuance of 88 percent of the new common shares to holder of the senior notes with the balance going to the company's management: and the guaran- tee of the new notes by Golden Ocean's vessel owning subsidiaries, which would also continue to perform their obligations under loan agreements, shipbuilding con- tracts and charters.

Fred W.Y. Cheng has resigned as chair- man and CEO of the company. Cheng, the architect of the company's major VLCC newbuilding program is departing the company to pursue new business interests.

ABS, DNV and others. * Custom designed for any application.