The Outlook For U.S. Navy Shipbuilding and Ship Repair Sales of equipment and services to the U.S. Navy continue to be the major source of business for marine equipment manufacturers. The U.S.

Despite recent efforts to cut the growth of overall defense expenditures, the Navy maintains a strong position.

There continues to be tremendous opportunities for increased product, sales and market expansion as a result of the huge amount of business generated by the Navy ongoing purchases.

P r e s i d e n t Bush will make changes to this budget request, which likely will result in a reduction in proposed overall defense spending and stretch-out of some major programs. These changes are not known at time of publication.

billion in FY 1991. This would represent a three to four percent increase over current spending. Described below are Navy's plans and budget for major program activities over the next several years.

The amount of $9.8 billion is requested in FY 1991 to build 14 ships—including two follow ships in the SSN 21 attack submarine program.

Exhibit 2 shows a ten-year pattern of spending for ship construction.

One column shows total obligational authority—the figure which essentially sets the limit on the agency's contractual authority. The other column shows the actual outlays in each year—representing pay- ments to contractors for ships and equipment. Outlays best indicate the level of business activity generated by Navy spending.

Shown in Exhibit 3 is the breakdown of the shipbuilding budget request for the FY 1988-1991 period.

Exhibit 4 shows the projected program over the next five years.

A major change in the future program has been the deletion of three SSN 688 submarines originally planned for FY 1991 and 1992.

There had been criticism of Navy's plan to overlap construction of the SSN 21 and SSN 688. The current plan is now to end the SSN 688 program in FY 1990. In FY 1991 Navy plans to order two SSN 21's and maintain a construction rate of three per year thereafter.

Navy plans to build DDG 51 Aegis destroyers at the rate of five per year over the next five years. This program is a target for budget cutting— most likely by stretch-out— building fewer ships per year over a longer period.

Other changes from last year's plan include a change in timing for several programs—including the AOE fast combat support ship, LHD amphibious assault ship and TAGOS survelliance ship. Three MCM mine countermeasure ships have been added for FY 1990.

These figures compare with projected spending of $4.7 million for ship maintenance and modernization in FY 1989. Details are shown in Exhibit 5. In addition, $208.0 million is to be spent on reserve fleet ship maintenance in FY 1990—vs.

As a consequence, a rising budget will not result in corresponding additional work opportunities.

The major reason for the increase is additional funding for communications and electronics equipment.

Much of the increase is the result of major initiatives associated with submarine modernization programs.

Funding of research, development, test and evaluation (RDT&E) is projected to grow f r om $9.3 billion in FY 1989 to $10.2 billion in FY 1990. Much of t h e increase is associated with increased spending for tactical programs which are entering full scale engineering development.

MILITARY CONSTRUCTION The Navy budget for military construction will decline from $1.6 billion in FY 1989 to $1.1 billion in FY 1990. The FY 1990 request cont a i n s funding for the strategic homeporting initiative—including $30.9 million for developing the New York homeport, $33.5 million for Gulf Coast sites and $20.3 million for t h e Everett homeport. However, a recent recommendation of t h e Base Closure Commission will likely result in lowered funding for Gulf Coast sites. 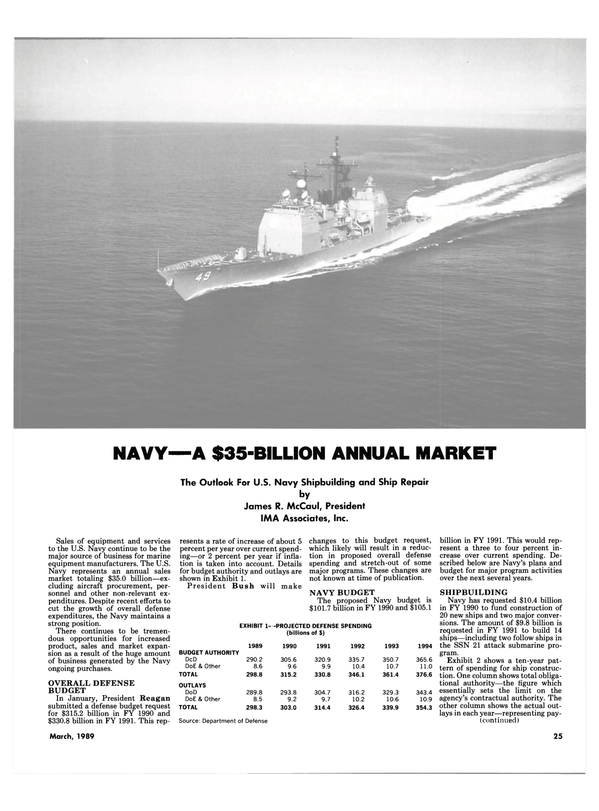 Other stories from March 1989 issue