The recent acquisition of Alco Power Inc. of Auburn, N.Y., by Bombardier Inc., a diversified Canadian manufacturer of transportation, recreational and industrial products, will enhance ALCO's position as a well respected diesel engine manufacturer, according to Gilles Courville, responsible for ALCO operations.

This acquisition will allow rationalization of diesel engine production, through the combination of human and material resources of ALCO and Bombardier's Rail and Diesel Products Division (formerly MLW-Worthington). It will also open new market opportunities at both the domestic and international levels, Mr. Courville stated.

The company came into prominence in the '60s following the introduction in 1959 of the first recreational snowmobile, marketed under the SKI-DOO tradename. Bombardier soon became the world leader of the snowmobile industry and, as part of a vertical integration program, acquired in the early '70s the Austrian company which manufactured the ROTAX engine for its snowmobiles. The ROTAX company also manufactured tramways for the Austrian market. Its acquisition marked Bombardier's first step into the rail transit industry.

Bombardier entered the North American mass transit field in 1974, with a contract to supply the Montreal Urban Community with subway cars. The company has since become a leader in the transit industry, having obtained several major orders, the most important being valued at over one billion Canadian dollars for the supply of 825 subway cars to the New York Metropolitan Transportation Authority.

In order to consolidate its position in the rail transportation sector, in 1976 Bombardier acquired MLW-Worthington, a Montrealbased manufacturer of diesel-electric locomotives and of the worldrenowned ALCO Model 251 Diesel Engine.

As may be recalled, in the '60s both ALCO and MLW were owned by Studebaker-Worthington, who sold ALCO to White Motors in 1970 but retained MLW.

"With the ownership of the two companies, Bombardier is now forg- ing ahead to a position of recognized leadership in one of its fields of endeavor—that being rail transportation, diesel-electric locomotives and diesel engines," notes Mr.

For naval applications, the company reports the 251 engine design complies with the requirements of the marine certification authorities both in the United States, Canada and overseas. Therefore, this engine is well suited for installation in a wide range of vessels, from naval through tugs, workboats, dredges, ferries, fishing vessels, as well as other naval applications both ocean and inland.

Installation in the hull is simplified by the use of a four-point mounting method that also reduces vibration. The 1,200-rpm version that gives a lower weight/power ratio provides greater fuel storage or cargo capacity.

Simplicity of design of the 251 engine allows for improved ease of maintenance, an important cost factor.

All 251 engines have the same bore and stroke. Components such as connecting rods, cylinder heads, liners and pistons, and fuel injection equipment are interchangeable, reducing inventory costs for the vessel owner.

The sound basic design of the 251 range of engines has remained the same, which permits easier upgrading of older 251 engines to today's applications and power requirements.

The Model 251 engine is a 9-inch bore by 10'/_»-inch stroke, four-cycle turbocharged unit. The maximum power per cylinder is 225 bhp with a compression ratio of 11.5:1. The engine cylinder block and base is a weldment with the underslung crankshaft carried in forged steel saddles welded into the block. The engine base serves as an oil sump and is fitted with a four-point mounting arrangement.

Prior to the recent acquisition of ALCO by Bombardier, the longstanding relationship between ALCO and MLW had resulted in refinements being brought to the Model 251 engine through the R&D activities of each facility. Now, with both under the same ownership, the joint efforts of ALCO and the Rail and Diesel Products Division will enhance R&D activities and, according to company spokesmen, will result in further improvements.

Rationalization of manufacturing techniques is allowing the new organization to take advantage of new production techniques and materials to improve the quality and life of the product as well as reduce engine operating costs. "One instance of this," Mr. Courville stated, "is the fact that we can lengthen the life of the 25f Diesel in an electric application by conservatively rating the unit at 635 to 2,800 kw for continuous duty from 720 to 1,200 rpm." Capital improvements have been made and more are planned for the two manufacturing facilities. In addition, the company reports a wide range of product support services, including feasibility studies, design, parts, technical assistance, maintenance facility and operations consulting.

A 30-page brochure describing these heavy-duty diesel engines is available at no cost. Profusely illustrated in four-color, the brochure lists specifications on the 251 series (6 to 18 cylinder) with general and specific engine characteristics and ratings. It includes specifications and performance tables, drawings, cutaway illustrations, and photos.

For your copy, Circle 48 on Reader Service Card 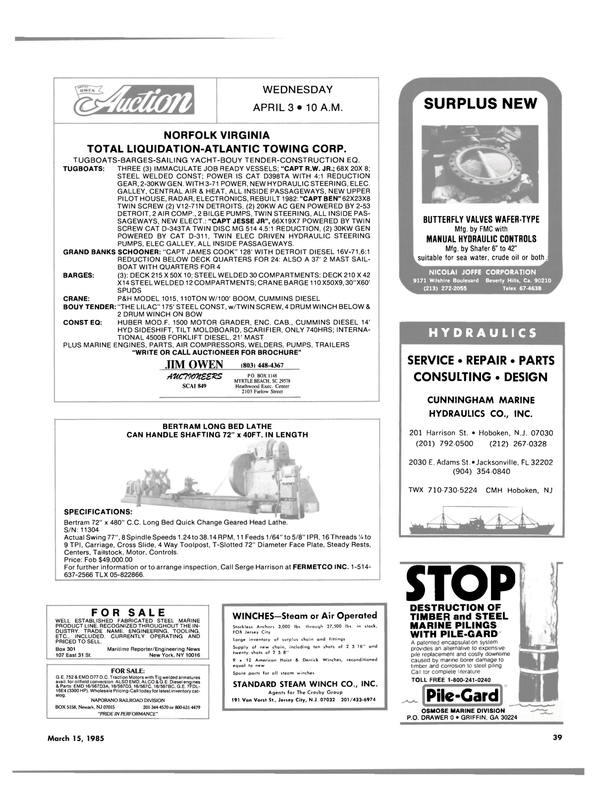