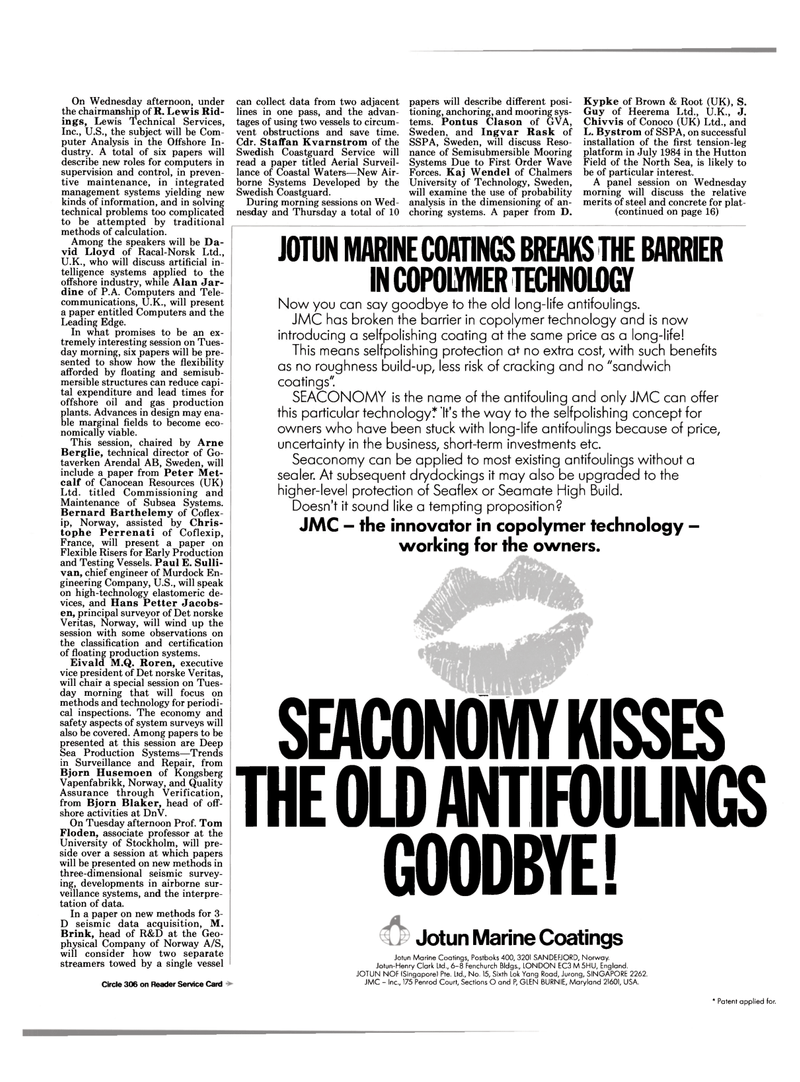 Inc., U.S., the subject will be Com- puter Analysis in the Offshore In- dustry. A total of six papers will describe new roles for computers in supervision and control, in preven- tive maintenance, in integrated management systems yielding new kinds of information, and in solving technical problems too complicated to be attempted by traditional methods of calculation.

Among the speakers will be Da- vid Lloyd of Racal-Norsk Ltd.,

U.K., who will discuss artificial in- telligence systems applied to the offshore industry, while Alan Jar- dine of P.A. Computers and Tele- communications, U.K., will present a paper entitled Computers and the

In what promises to be an ex- tremely interesting session on Tues- day morning, six papers will be pre- sented to show how the flexibility afforded by floating and semisub- mersible structures can reduce capi- tal expenditure and lead times for offshore oil and gas production plants. Advances in design may ena- ble marginal fields to become eco- nomically viable.

This session, chaired by Arne

France, will present a paper on

Veritas, Norway, will wind up the session with some observations on the classification and certification of floating production systems.

Eivald M.Q. Roren, executive vice president of Det norske Veritas, will chair a special session on Tues- day morning that will focus on methods and technology for periodi- cal inspections. The economy and safety aspects of system surveys will also be covered. Among papers to be presented at this session are Deep

Sea Production Systems—Trends in Surveillance and Repair, from

Assurance through Verification, from Bjorn Blaker, head of off- shore activities at DnV.

Floden, associate professor at the

University of Stockholm, will pre- side over a session at which papers will be presented on new methods in three-dimensional seismic survey- ing, developments in airborne sur- veillance systems, and the interpre- tation of data.

In a paper on new methods for 3-

Brink, head of R&D at the Geo- physical Company of Norway A/S, will consider how two separate streamers towed by a single vessel

Circle 306 on Reader Service Card can collect data from two adjacent lines in one pass, and the advan- tages of using two vessels to circum- vent obstructions and save time.

Cdr. Staflfan Kvarnstrom of the

During morning sessions on Wed- nesday and Thursday a total of 10 papers will describe different posi- tioning, anchoring, and mooring sys- tems. Pontus Clason of GVA,

Sweden, and Ingvar Rask of

Systems Due to First Order Wave

University of Technology, Sweden, will examine the use of probability analysis in the dimensioning of an- choring systems. A paper from D.

Chivvis of Conoco (UK) Ltd., and

L. Bystrom of SSPA, on successful installation of the first tension-leg platform in July 1984 in the Hutton

Field of the North Sea, is likely to be of particular interest.

Now you can say goodbye to the old long-life antifoulings.

JMC has broken the barrier in copolymer technology and is now introducing a selfpolishing coating at the same price as a long-life!

This means selfpolishing protection at no extra cost, with such benefits as no roughness build-up, less risk of cracking and no "sandwich coatings".

SEACONOMY is the name of the antifouling and only JMC can offer this particular technology? 'It's the way to the selfpolishing concept for owners who have been stuck with long-life antifoulings because of price, uncertainty in the business, short-term investments etc.

Seaconomy can be applied to most existing antifoulings without a sealer. At subsequent drydockings it may also be upgraded to the higher-level protection of Seaflex or Seamate High Build.

JMC - the innovator in copolymer technology - working for the owners.