B&W Shipyard, Copenhagen, Denmark, has completed the first of two Hamlet Multi-Flex ships of about 12,600-dwt for Sudan Shipping Line.

The ship was named White Nile, after the river which joins the Blue Nile at the city of Khartoum, and which together continue to the Mediterranean as the river Nile. The christening ceremony was sponsored by Ismail M. Bakheit, chairman of Sudan Shipping Line.

Like the other ships of the Hamlet Multi-Flex type, the M 'S White Nile has been built to Lloyd's Class + 100 A.l. + LMC, "Strengthened for Containers," and to the usual international conventions and regulations for cargo ships trading worldwide.

As with the first vessels in the Hamlet Multi-Flex series, each of these new ships for Sudan Shipping is propelled by one B&W turbocharged, two-stroke, diesel engine, type 5L55GFC with maximum continuous rating of 6,700 bhp at 150 rpm. The main engine is direct coupled to a four-bladed propeller, and is equipped to use fuel oil with a maximum of 3,500 Sec. Redwood I.

The new vessel is equipped with three generator sets, all powered by B&W turbocharged diesel engines.

A soundproofed control room has been installed in the engine room.

Speed during trials, at 80 percent MCR, was about 16V> knots.

The ship has four separate holds with four hatches in the upper deck and three hatches in the 'tween deck. As a special feature, cargo hold No. 1 has been arranged for carrying vegetable oils, with necessary heating and pumping systems installed. The hatches are equipped with Mac- Gregor folding-type steel hatch covers on the upper deck and longitudinal hinges on the 'tween deck. Hatch covers are reinforced for stowage of containers.

The ship is equipped with a slewing stern ramp for handling of ro/ro cargo.

The M 7S White Nile will accommodate 39 persons. The bridge deck contains a roomy combined wheelhouse and chartroom equipped with the most modern navigational instruments, radio station and cabins for radio officer and pilot. A swimming pool is installed aft of the wheelhouse.

The officers' deck contains living quarters for the captain, chief engineer, and other officers. The captain and chief engineer each has a suite comprising a living room, bedroom and bath. 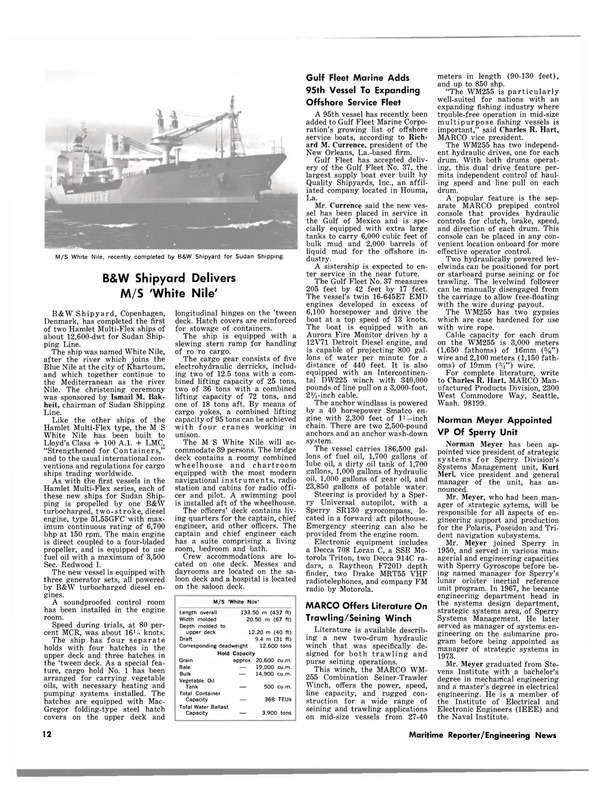