The second of a series of 1,200- ton/225-foot seiners being bulit by Peterson Builders, Inc., Sturgeon Bay, Wis., splashed into Sturgeon Bay's waters on January 5, 1980, nearly three months ahead of schedule. The Captain Frank Medina (shown above) is owned by the Carolyn M. Corporation of San Diego, Calif., whose president is experienced and well-known Joe Medina Jr. The vessel will fish for Star-Kist and will fly the U.S. flag. She is now in the final outfitting stages and a festive c h r i s t e n i n g and commissioning ceremony will be held in the spring.

She will achieve speeds of over 16 knots from her single General Motors EMD 20E7 engine driving a five-blade 128-inch-diameter Coolidge stainless-steel propeller t h r o u g h a Falk 5:1 reverse/ reduction gear. Mathers of Seattle, Wash., supplied the engine and bowthruster controls. Her 48- inch Schottel bowthruster, driven by a GM Detroit Diesel 12V-71 engine, is controlled from either the port bridge wing or the crow's nest, and is interfaced with her Sperry gyro and autopilot system to maintain a heading while in a set or drifting. Three Caterpillar model D353 engines driving 300-kw Kato generators supply the Federal Pacific parallel switchboard.

A complete engine monitoring and alarm system was designed and built by Peterson Builders. Pro- Line of San Diego supplied all the paints for the vessel, including epoxy and polyurethane coatings.

Under construction and awaiting spring launching is Peterson Builders' third hull in this series, the F / V Jane. She is being constructed for Venatun, S.A., owners of the lead ship of the class, the F / V Napoleon which is rapidly setting a mark as one of the most successful new tuna boats to enter the fleet.

PBPs g e n e r a l manager Joe Gagnon has announced that there is production space open for 1981 deliveries, subject to prior commitment.

The Peterson yard is located in Sturgeon Bay, Wis. 54235. 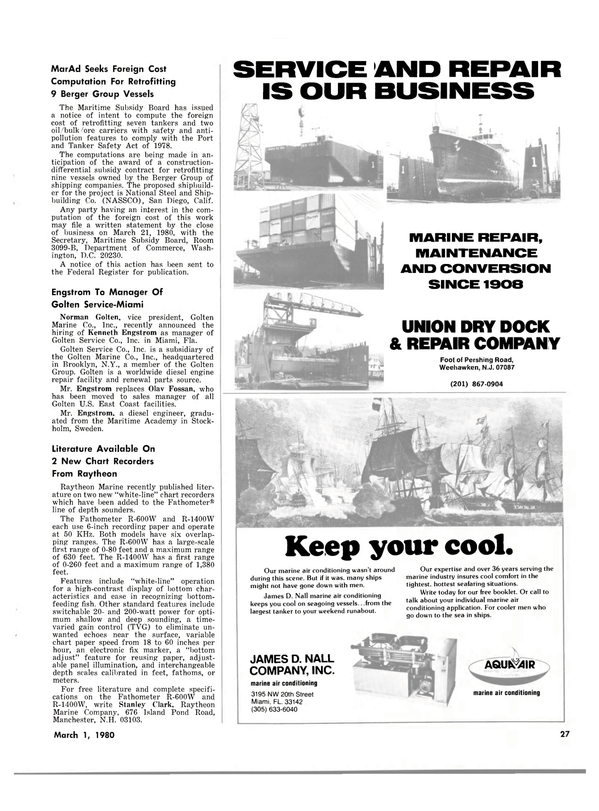 Other stories from March 1980 issue