A maritime casualty with everything a novelist could hope for – a huge state-of-the-art modern passenger vessel strikes a rock and eventually grounds on the foreshore of a bucolic island town, thousands of lives are imperiled, likely chaos on the bridge, a captain – excoriated by officialdom – who contends he “fell” into one of the earliest departing lifeboats and now is suing to be re-hired by his former cruise line employer, divine intervention returning the vessel to shore according to the prosecutor, and – even – a mysterious blond and a Friday the 13th sailing and disaster date short by only three months from the 100th “anniversary” of R.M.S. Titanic striking an iceberg and sinking with tragic loss of life.
Sadly, on January 13, 2012, fiction became reality for Costa Concordia.

Lessons Learned?
Already there is talk of “lessons to be learned” from this casualty.  In fact though, once the vessel data recorded information is developed, analyzed, an official transcript issued and testimony is assessed, new “lessons” are unlikely to be revealed. The informed conclusions likely will be that lessons previously “learned” simply, as usual, are not being applied in practice as well as that common sense assessment of long standing conditions should be re-enforced by implementation of more Rules, Regulations, Policies and Practices, among which are included the International Safety Management Code and its attendant Safety Management System (“RRPP”). For example, passenger evacuation from the grounded Costa Concordia was impeded and inefficient because passengers had not received muster instruction and guidance within the few hours from boarding until the grounding.  This, despite an informed maritime industry knowing for years that ships generally are at greatest risk from collision, allision, and grounding when close to land, such as when leaving port, than when under way on the open sea. Given this knowledge, one asks why were the conditions on Costa Concordia necessary to trigger the new common sense policy requiring mandatory emergency drills be conducted prior to a passenger vessel departing an embarkation port.
In keeping with maritime tradition, the casualty is being viewed with 20-20 hindsight in an effort to determine what happened and how similar events can be avoided in the future. Also in keeping with maritime tradition, the anticipated outcome will be consideration and eventual implementation of a variety of new reactive RRPP or modification of existing RRPP, or, more likely, both.

RRPP: the Panacea?
Danger lurks to the extent that new and existing RRPP will be accepted and relied upon as adequate to the risks and, trusting in that reliance, the industry will proceed “business as usual.” But reality is that RRPP are not a panacea capable of remedying risk and human error within the maritime domain, despite politicians’ and regulators’ enthusiasm for reacting to media orchestrated popular concerns as well as even the well-intentioned separate efforts on the part of maritime management.
At least one trade journal has reported existence of a culture of Italian passenger vessels sailing close to shore, a practice of such long standing as to have received the Italian title “inchino.”  Shipboard morale benefitted from close passage off towns where many crew members lived and public relations benefitted from passengers’ enjoyment of the novelty of the experience.  Under such circumstances, credulity is strained when management disavows knowledge of its masters’ participation in the practice. Inchino may present little risk if performed at a safe distance stated in promulgated RRPP.  But existence of such RRPP does not, of itself, ensure adherence.
Given the implied beneficent purposes of inchino, more likely than not, human nature together with cultural and personality factors suggest that over time shipboard justifications would result in the prescribed safe distance observed being progressively decreased and so shrinking the margin of error initially factored into the determination of what distance a safe distance would be and so coming ever closer to land hazards. What initially may have been idiosyncratic behavior becomes shared as more and more sharp end practitioners perceived a benefit from coming closer to the island without experiencing peer or management criticism or punishment.  This type of gradual RRPP erosion is styled “normalization of deviance,” a pernicious undermining of RRPP.
Deliberate violation of RRPP, especially of those that are inartfully worded or are perceived as incompatible with the operational environment, is not infrequent. The violators’ rationales include a misguided desire to advance the company’s economic interests, lack of peer or managerial criticism as well as the personality of the violator. Therefore, RRPP adherence cannot be presumed, even where simulator or audited competence is confirmed.
Even in the absence of violations, there is the potential for violation “coming out of the blue.”  A recent study, where sheep are persons normally disinclined to violate RRPP and wolves have no such scruples, reveals the propensity for RRPP violation:

Sheep in Sheep’s’ Clothing (confirmed non-violators) – 22.5% of respondents, guardians of the standards.

Wolves in Sheep’s’ Clothing – 33.8% of respondents have not yet violated but would violate if circumstances are “appropriate”.

Sheep in Wolves’ Clothing – 14.1% of respondents are violators but not happy violators.

Wolves in Wolves’ Clothing – 29.6% of respondents would not hesitate to violate RRPP.

Strikingly, 77.5% of respondents either reported violating or would have no qualms violating when the opportunity arrives.
The maritime domain is unique in its long tradition of mariners’ recognition and pride in their professional knowledge and competence combined with an environment in which the variety of potential risky circumstances is so extreme that no catechism of RRPP can account for all situations.  The rigidity of RRPP must be balanced against a flexibility that encourages critical thinking and exercise of sound judgment. This necessity is recognized by Rule 2(a) of the COLREGS that, though inartfully worded, allows recourse to “the ordinary practice of seamen or … the special circumstances of the case.” There is real danger that overly detailed and embracive RRPP, however well intentioned, undermine development of necessary judgmental skills. The issue is well stated by a shipmaster quoted as saying:  “… when you are at sea, you have to be able to think, and you can’t [think] when you must slavishly look up [written procedures] in a book.  …  No matter if your own thought is better or not, you have to do what is written.”  Unlike biblical Pharisees bound to the letter of a law, mariners require and deserve reasonable latitude allowing them to accomplish their primary duty of vigilance to protect the lives and material assets entrusted to their keeping.
The challenge that RRPP inhibit critical thinking runs from the sharp end operator upstream to management, where there may be misplaced reliance that RRPP, with little more, satisfies management’s responsibility to ensure a functional Safety Management System. The folly of relying exclusively or excessively upon formal RRPP as providing an appropriate level of safety can be demonstrated from the 2007 sinking in Antarctic waters of the Liberian flagged passenger vessel Explorer, fortunately without casualties. The vessel was in compliance with class requirements for a vessel of her age, type and geographic operating area. However, the classification society and SOLAS rules were unrealistic in view of the harsh Antarctic conditions regularly to be encountered.
The vessel’s shell plating thickness criteria were “grandfathered,” accepted on a thickness percentage basis rather than tested against design load generated by ice pressure. The number of immersion suits required was insufficient for the ship’s complement of crew and passengers. The four lifeboats were uncovered, exposing occupants to the harsh Antarctic conditions. Critical and proactive stakeholder thinking was invited by the investigation report asking “[r]ather than just meet the current SOLAS regulations[,] should cruise companies not carry out a safety case analysis based on the reality of working in these harsh waters?”
And while formal RRPP may reflect an industry standard, such standard will not necessarily protect against legal liability. The 1932 federal Second Circuit Court of Appeals admiralty decision T.J. Hooper, and its progeny, are accepted for the proposition that “there are precautions so imperative that even their universal disregard will not excuse their omission.”
By their nature, RRPP tend to apply more heavily at the operational level than to management, with the exception of those that financially penalize consequences, such as post-Exxon Valdez OPA 90. Didactic RRPP affecting higher shore side level management are difficult to construct because such management is inherently inductive, that is to say based upon observation and wide-ranging experiences from multiple sources, with no one pattern fitting all situations, as acknowledged by the ISM Code. While management may benefit from the great discretion allowed due to its particular services, types of vessels and culture, the flip side is that the discretion must be soundly applied; taking into account all that management knows or should know.  Simply put, the ship owner/operator/manager is not allowed to function with a “blind eye,” such as to the potential dangers posed by inchino or the failure to conduct an appropriate muster before departing an embarkation port.

Effective RRPP
RRPP innovation is easiest in response to particular past or presently existing situations, where relevant facts are discrete and known. But effective RRPP must address future eventualities to minimize their adverse occurrence and mitigate their consequences if they do occur. A curious and informed mind, willing to explore future possibilities and proactive risk assessment is required for drafting prophylactic RRPP and also a willingness objectively to determine with what response the RRPP are received by those persons intended to apply them and how the RRPP function in practice, i.e. an impact and sustainability assessment.
Remarkable strides have been made, since Titanic’s loss one hundred years ago, in bridge-to-bridge and ship-to-shore (and vice versa) communication, ECDIS, ARPA, AIS, GPS and the like, as well as ship design and construction.  And promulgation of well-intentioned safety oriented RRPP has flourished.
Remaining relatively consistent, however, has been the shipboard authority gradient (despite various incantations of bridge/crew resource management), a degree of nautical daring-do, and organizational competition between protection and profit; the latter no doubt exacerbated by the current challenging economic situation. And while there has developed greater awareness of scene-setting errors and omissions upstream from the front line operator and greater understanding of cognitive limitations, there has been no corresponding advance modifying cognitive limitations of human behavior, such as confirmation and other biases, situational awareness assessment, assimilating information of varying reliability and relevance from multiple sources, dealing with multiculturism and decision making, to name but a few.
When considering what “new” lessons may be learned out of the Costa Concordia casualty, worthy of consideration would be a critical examination of maritime domain RRPP and their limitations and also expanded operator and management education addressing cognitive factors and how those factors influence what occurs on the bridge, in the engine room, and in the boardroom.

(As published in the 1Q edition of Maritime Professional - http://www.maritimeprofessional.com/) 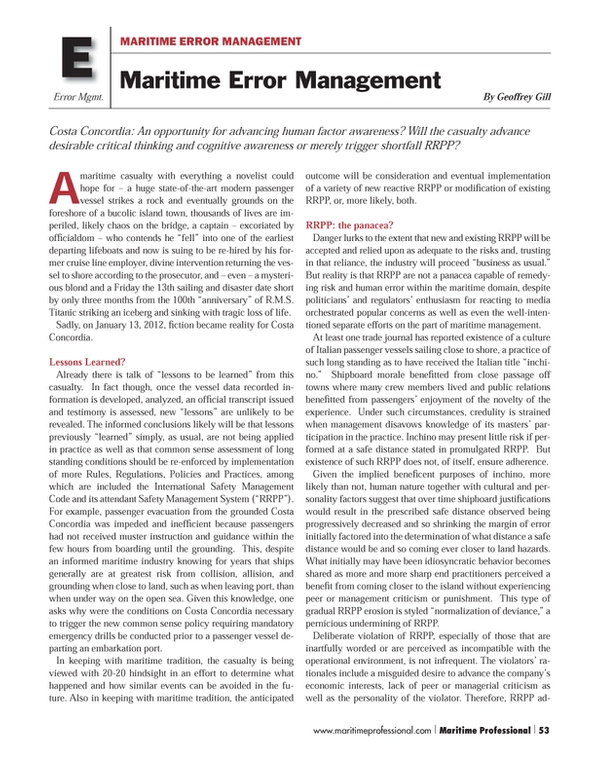