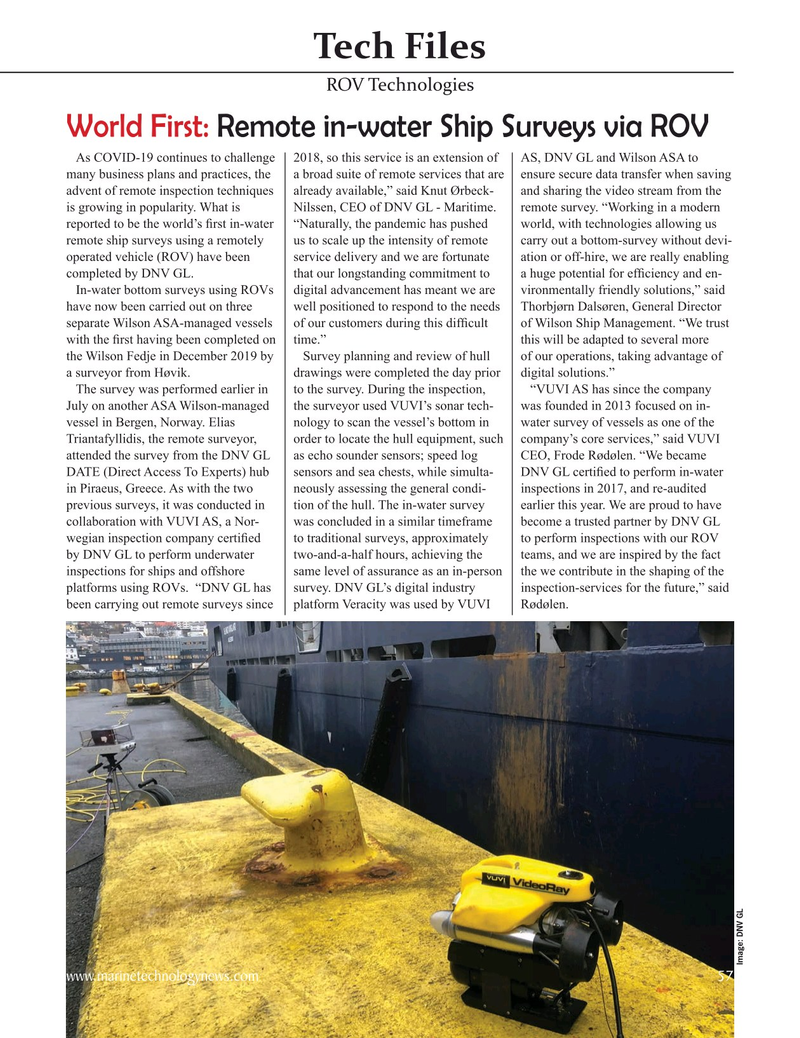 As COVID-19 continues to challenge 2018, so this service is an extension of AS, DNV GL and Wilson ASA to many business plans and practices, the a broad suite of remote services that are ensure secure data transfer when saving advent of remote inspection techniques already available,” said Knut Ørbeck- and sharing the video stream from the is growing in popularity. What is Nilssen, CEO of DNV GL - Maritime. remote survey. “Working in a modern reported to be the world’s ? rst in-water “Naturally, the pandemic has pushed world, with technologies allowing us remote ship surveys using a remotely us to scale up the intensity of remote carry out a bottom-survey without devi- operated vehicle (ROV) have been service delivery and we are fortunate ation or off-hire, we are really enabling completed by DNV GL. that our longstanding commitment to a huge potential for ef? ciency and en-

In-water bottom surveys using ROVs digital advancement has meant we are vironmentally friendly solutions,” said have now been carried out on three well positioned to respond to the needs Thorbjørn Dalsøren, General Director separate Wilson ASA-managed vessels of our customers during this dif? cult of Wilson Ship Management. “We trust with the ? rst having been completed on time.” this will be adapted to several more the Wilson Fedje in December 2019 by Survey planning and review of hull of our operations, taking advantage of a surveyor from Høvik. drawings were completed the day prior digital solutions.”

The survey was performed earlier in to the survey. During the inspection, “VUVI AS has since the company

July on another ASA Wilson-managed the surveyor used VUVI’s sonar tech- was founded in 2013 focused on in- vessel in Bergen, Norway. Elias nology to scan the vessel’s bottom in water survey of vessels as one of the

DATE (Direct Access To Experts) hub sensors and sea chests, while simulta- DNV GL certi? ed to perform in-water in Piraeus, Greece. As with the two neously assessing the general condi- inspections in 2017, and re-audited previous surveys, it was conducted in tion of the hull. The in-water survey earlier this year. We are proud to have collaboration with VUVI AS, a Nor- was concluded in a similar timeframe become a trusted partner by DNV GL wegian inspection company certi? ed to traditional surveys, approximately to perform inspections with our ROV by DNV GL to perform underwater two-and-a-half hours, achieving the teams, and we are inspired by the fact inspections for ships and offshore same level of assurance as an in-person the we contribute in the shaping of the platforms using ROVs. “DNV GL has survey. DNV GL’s digital industry inspection-services for the future,” said been carrying out remote surveys since platform Veracity was used by VUVI Rødølen.