Measuring the Hostile Ocean Beneath Hurricanes

The influences of ocean conditions and currents on living environments are now more widely appreciated—from the Earth’s climate and severe weather conditions to fisheries and biodiversity. Sustained and widespread measurements are needed to provide essential clues for understanding the oceans, for effective monitoring of environmental changes, and for helping to clarify the long-term effects of global warming.

To meet this challenge, ocean researchers have invented various types of unmanned observing platforms. Two variants developed and supplied by Teledyne Webb Research are gliders for measuring upper-ocean waters and profiling floats for observing global circulation. These platforms, which support a growing range of applications, have been especially valuable for measuring the challenging waters beneath severe storms.

Measuring Ocean Conditions in Storm Tracks
Global concern about Earth’s changing climate has thrust warming trends in the atmosphere and ocean into public attention. Storms have been in the spotlight, especially hurricanes and typhoons. Accurately predicting a storm’s landfall and strength saves lives and reduces unnecessary defensive expenses.

The energy that feeds tropical storms comes from heat in the upper 50 m of the ocean, specifically waters warmer than 79° F. Researchers have identified that significantly improved forecasting of a tropical storm’s intensity, the indicator of its devastating impact, comes from accurately knowing about subsurface water temperatures along the storm’s path. The underlying water temperature is not static. Rather the storm’s action on the ocean entrains deeper water into the surface layers thereby changing the available energy supply. This mixing can act to either intensify or diminish the storm depending on the temperature of the upwelled water. Thus, knowing subsea temperatures is crucial information for storm forecasting. Additionally, knowing the currents and their shear at different phases of a storm gives greater insight into the dynamics of air/sea interactions. 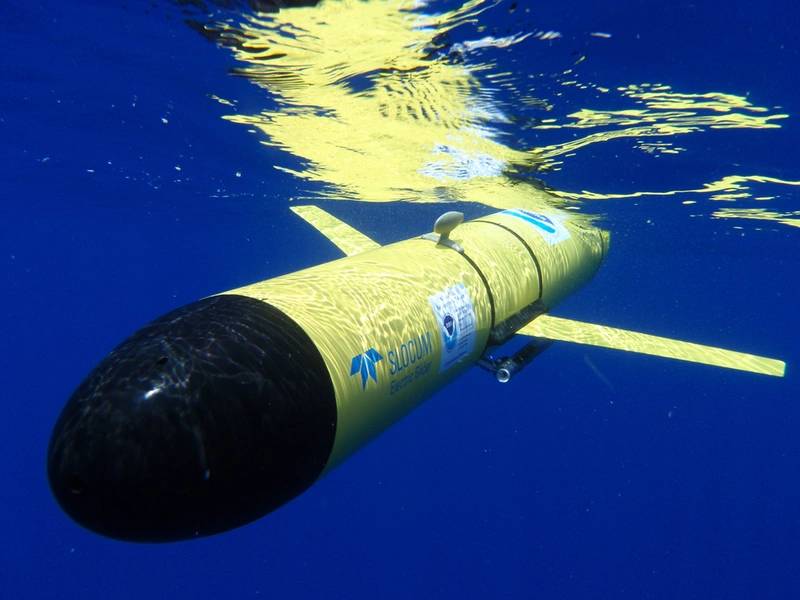 Slocum gliders change their volume to sink or rise; attached wings produce lift when fluid passes over their surfaces. The net effect is to convert some of glider’s vertical motion into horizontal travel. Slocum gliders move at 35 cm/s and can operate from 4 m to 1000 m depth; an optional hybrid thruster provides speeds to 100 cm/s.

Slocum gliders fly in an undulating sawtooth pattern, following a programmed transect, sometimes for extended periods. For example, Slocum gliders have made continuous crossings of major ocean basins that have required more than four hundred days at sea.
Over time, Slocum gliders have been equipped with an increasing variety of oceanographic sensors, including an integrated current profiler. Physical properties such as water temperature and salinity are routinely measured. Gliders have also observed ocean acidity, chlorophyll, suspended sediments, and harmful algal blooms, as well as internal waves.

Over 45 sensor suites have been integrated on Slocum gliders allowing them to serve a broad range of applications. During the Macondo oil spill in 2010 in the Gulf of Mexico, Slocum gliders collected subsurface data to support response work. Recent payloads have included turbulence sensors for measuring ocean mixing, bio-acoustic sensors for assessing zooplankton stocks off Antarctica, and hydrophones for near real-time monitoring of North Atlantic right whales off the east coasts of U.S. and Canada. Slocum gliders are serving new roles at Antarctic research sites as well, especially at the edge of ice sheets.

Storm Monitoring Gliders
For the last decade, Slocum gliders from Teledyne Webb Research have monitored the challenging waters associated with severe storms, sending reports even while encountering waves exceeding 10 m in height. These unmanned vehicles provide a cost-effective way to take sustained ocean measurements with high-spatial resolution. Equally important for storm monitoring, the gliders have both the control authority and endurance to intercept the storm track. For storm monitoring, Slocum gliders continually patrol a designated transect. The gliders measure temperature, salinity, and other properties while they descend and rise through the upper ocean. The gliders surface periodically to send their measurements to storm-forecasting centers. This subsea data is input to computer models that output predictions about a storm’s intensity and trajectory. The accuracy of these computer predictions has improved due to the data from gliders.

In fact, the U.S. Navy often has 50 gliders deployed worldwide that send data for ocean weather forecasting. Ten years ago, Teledyne was awarded the Navy’s Program of Record contract for the operational use of gliders.

An impressive example of the benefit of using storm monitoring gliders comes from data collected during Typhoon Soulik in the Western North Pacific in 2018. A Slocum glider from Rutgers University had been deployed in advance of the storm. The in-situ data showed an extremely rapid change in upper ocean water temperature upon the arrival of the storm. In comparison, a computer-based forecasting model showed a much slower transition in response to the storm, leading to a discrepancy of 6˚ C for the change in water temperature, between the model and the collected data. Updating the model with near-real time data allows for a better storm forecast.

During a recent hurricane season in the U.S., a dozen organizations deployed storm gliders. Slocum gliders from Teledyne Webb Research were prevalent due to their proven performance. Taking weather forecasts into account, researchers directed the gliders towards a storm’s anticipated path several days in advance. Glider transects were coordinated and oriented to run across the path of the storm, covering the mid to outer continental shelf, along much of the U.S. east coast. 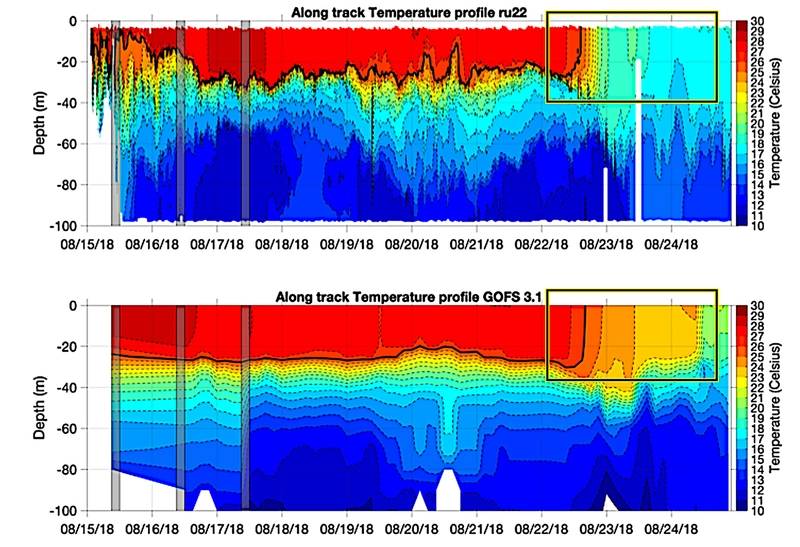 In the mid-Atlantic Bight, which extends from Cape Cod, MA to Cape Hatteras, NC, the continental shelf is shallow. Its deep waters are well documented to be much colder than surface waters during summer time. Considering the oceanic upwelling below the eye of a storm, the surfacing of these cold waters might be expected to weaken a passing hurricane.

Two Slocum gliders, deployed ahead of Hurricane Sandy, helped tell a different story in that case. Using computer models and data from the gliders, researchers from Rutgers University determined that strong winds on the leading edge of the hurricane set up a downwelling circulation that caused the cold bottom water to be carried offshore. Thus, there was no available cold water to mix to the surface and thereby diminish the storm’s intensity when its eye passed over the same region; the storm intensity was, in fact, significantly stronger than would have been conventionally predicted.

The success of using Slocum gliders for storm monitoring is apparent from the growing size of the fleet. In 2018, more than thirty gliders were on duty for observing hurricanes Florence, Isaac, and Helene. Participating glider organizations came together from government, academia, and industry in a team effort to use technology to better protect coastal communities.

Measuring the Changing Ocean Beneath Hurricane Michael
Profiling float technology has transformed how the ocean is observed. This method was pioneered by scientists and engineers at Teledyne Webb Research and Scripps Institution of Oceanography. The international Argo program has deployed fleets of these devices for sustained and widespread exploration of the global ocean. The resulting data sets form a rich resource for studying climate and ocean processes.

Many of these devices are the Autonomous Profiling Explorer (APEX) floats supplied by Teledyne Webb Research, which has delivered over 10,000 profiling floats to the Argo program—the largest quantity from one supplier. APEX floats make periodic vertical cycles, typically every 10 days, by changing their volume (and therefore buoyancy) to rise and sink. As they ascend through the water column, they measure temperature and salinity.

Efforts to improve understanding and prediction of major hurricanes require gathering ocean and atmospheric data in hostile and challenging places. Oceanic properties such as water current velocity, temperature, and salinity must be measured not only throughout the water column but before, during, and after the storm’s passage.

For exploring ocean conditions beneath hurricanes, the EM-APEX floats must be deployed at short notice ahead of moving storms; thus, they are air-dropped by parachute from aircraft. When hurricane Michael entered the Gulf of Mexico in October 2018, three EM-APEX floats were launched into its path by a research team led by Professor Nick Shay (University of Miami). Air deployment was from a USAF WC-130J Hercules aircraft operating from the Keesler Air Force base; these planes are modified for collecting weather information in hurricanes. Several US government agencies that monitor and predict hurricanes helped with the air deployment. Teledyne Marine provided hosting services for all data transmitted from the deployed floats, as well as other technical support.

The profiling patterns of the EM-APEX floats varied during the deployment. For 12 hours before the hurricane’s arrival, the floats continually cycle between the surface and 800 m depth. Once the hurricane arrived, the floats switched to cycling between 30 m and 300 m depth thereby avoiding the hazardous, highly energized surface region while still acquiring upper-ocean data.

After the hurricane had passed, the floats cycled between the surface and 500 m depth. This pattern resolved near-inertial waves, which are the most energetic feature in a storm’s wake. Near-inertial motions have enhanced velocity shear, making them a key driver for vertical mixing processes.

The EM-APEX floats were deployed about 12 hours before the hurricane arrived at their location. During the campaign, the desired profiling cycles in all three phases were executed correctly, ensuring that none of the EM-APEX floats were damaged by the storm’s fury. While a float was at the surface, its data transmissions were received by the Teledyne dataserver.  The EM-APEX floats recorded more than 600 profiles over six days. This data stream helped researchers to understand and predict the characteristics of a major hurricane, as well as to see, in near real-time, how the ocean responded to energetic atmospheric forcing.

Protecting Coastal Communities
The preceding accounts exemplify the remarkable advances in ocean observing capabilities that have come from unmanned observing platforms. These portable, mobile devices have been used to take extended measurements in waters that are too challenging for ships and too hazardous for humans. Gliders and profiling floats permit assessing and reporting in near real-time the hostile ocean conditions beneath hurricanes and typhoons. In addition to the value of these data for ocean research, their informational content delivers important societal benefit. They have contributed to more accurate predictions of storms’ landfall and strength, thereby protecting coastal communities, reducing unnecessary defensive expenses, and even saving lives.

Hailing from the land down under, Dr. Peter Spain studied Ocean Physics at the Applied Physics Laboratory, University of Washington. He worked with new instruments for measuring ocean currents. After a post-doc at Scripps Institution of Oceanography, Peter joined RD Instruments in 1990. He has worked in Sales & Marketing where he progressed from sales staff to department and business unit management. Today, the common theme to his diverse activities is Technical Marketing.

Clayton Jones, Senior Director of Technology for Teledyne Marine, has been involved in the creation, design, and development of oceanographic sensor platforms including profiling floats and gliders. 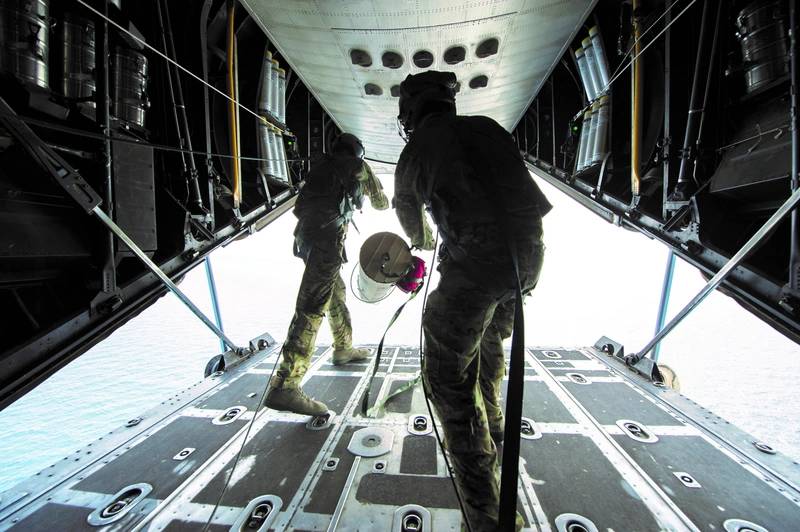 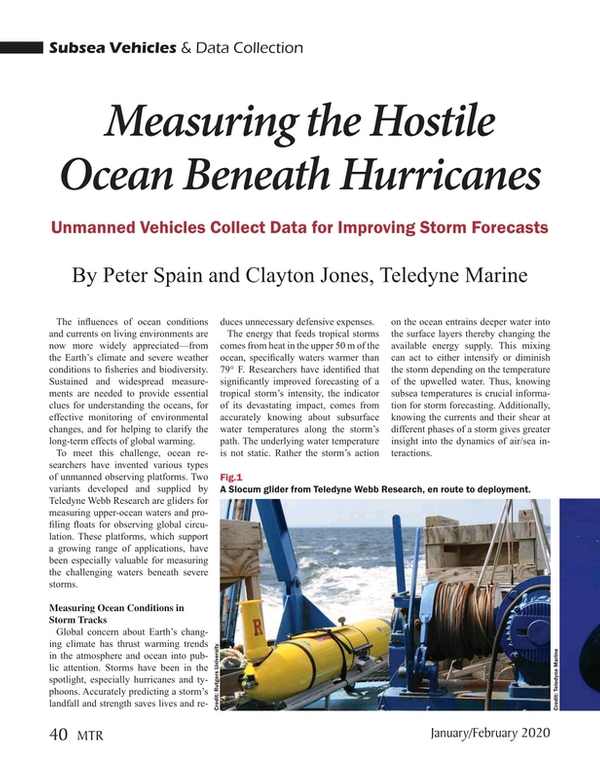