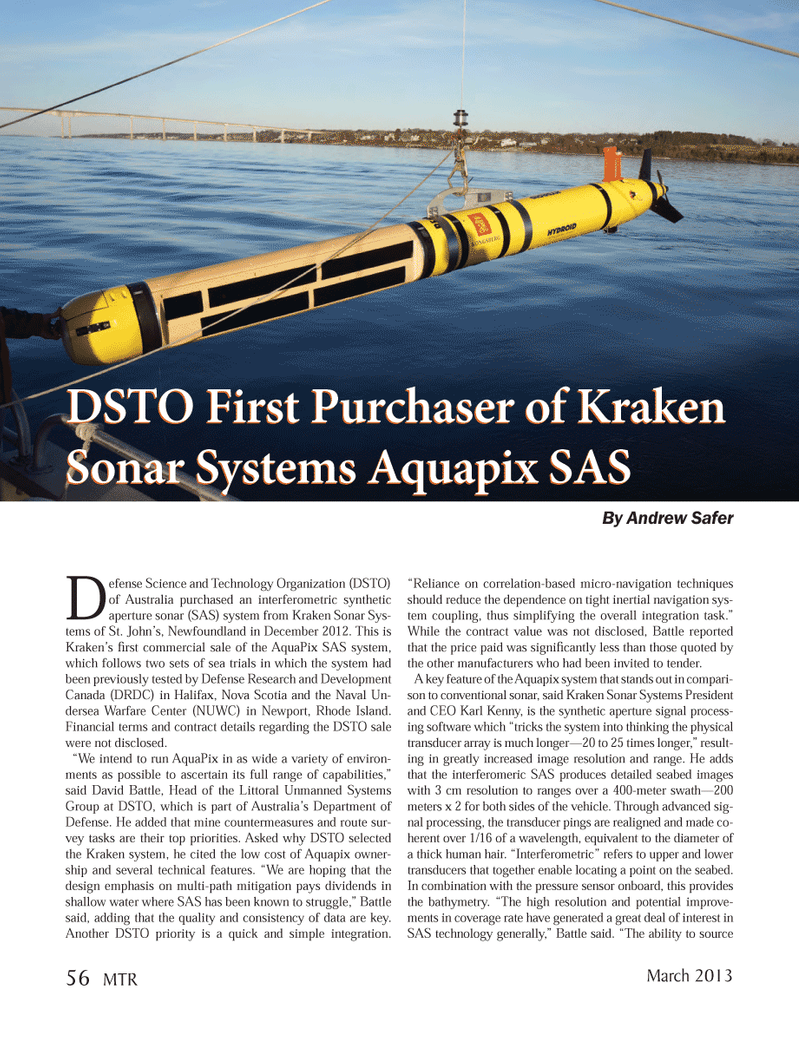 Defense Science and Technology Organization (DSTO) of Australia purchased an interferometric synthetic aperture sonar (SAS) system from Kraken Sonar Sys- tems of St. John?s, Newfoundland in December 2012. This is Kraken?s  rst commercial sale of the AquaPix SAS system, which follows two sets of sea trials in which the system had been previously tested by Defense Research and Development Canada (DRDC) in Halifax, Nova Scotia and the Naval Un- dersea Warfare Center (NUWC) in Newport, Rhode Island. Financial terms and contract details regarding the DSTO sale were not disclosed.?We intend to run AquaPix in as wide a variety of environ- ments as possible to ascertain its full range of capabilities,? said David Battle, Head of the Littoral Unmanned Systems Group at DSTO, which is part of Australia?s Department of Defense. He added that mine countermeasures and route sur- vey tasks are their top priorities. Asked why DSTO selected the Kraken system, he cited the low cost of Aquapix owner- ship and several technical features. ?We are hoping that the design emphasis on multi-path mitigation pays dividends in shallow water where SAS has been known to struggle,? Battle said, adding that the quality and consistency of data are key. Another DSTO priority is a quick and simple integration. ?Reliance on correlation-based micro-navigation techniques should reduce the dependence on tight inertial navigation sys- tem coupling, thus simplifying the overall integration task.? While the contract value was not disclosed, Battle reported that the price paid was signi cantly less than those quoted by the other manufacturers who had been invited to tender. A key feature of the Aquapix system that stands out in compari- son to conventional sonar, said Kraken Sonar Systems President and CEO Karl Kenny, is the synthetic aperture signal process- ing software which ?tricks the system into thinking the physical transducer array is much longer?20 to 25 times longer,? result- ing in greatly increased image resolution and range. He adds that the interferomeric SAS produces detailed seabed images with 3 cm resolution to ranges over a 400-meter swath?200 meters x 2 for both sides of the vehicle. Through advanced sig- nal processing, the transducer pings are realigned and made co-herent over 1/16 of a wavelength, equivalent to the diameter of a thick human hair. ?Interferometric? refers to upper and lower transducers that together enable locating a point on the seabed. In combination with the pressure sensor onboard, this provides the bathymetry. ?The high resolution and potential improve- ments in coverage rate have generated a great deal of interest in SAS technology generally,? Battle said. ?The ability to source DSTO First Purchaser of Kraken Sonar Systems Aquapix SAS DSTO First Purchaser of Kraken Sonar Systems Aquapix SAS By Andrew SaferMarch 2013 56 MTRMTR #2 (50-65).indd 56MTR #2 (50-65).indd 563/6/2013 1:45:46 PM3/6/2013 1:45:46 PM