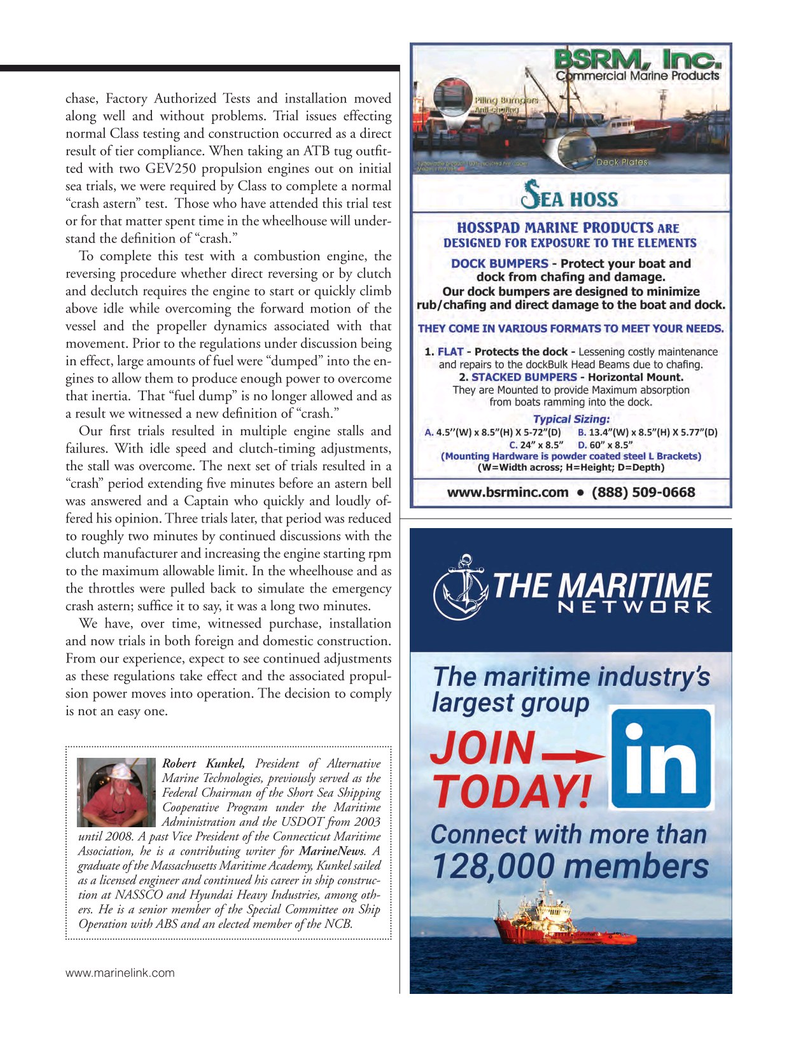 chase, Factory Authorized Tests and installation moved along well and without problems. Trial issues effecting normal Class testing and construction occurred as a direct result of tier compliance. When taking an ATB tug out? t- ted with two GEV250 propulsion engines out on initial sea trials, we were required by Class to complete a normal “crash astern” test. Those who have attended this trial test or for that matter spent time in the wheelhouse will under- stand the de? nition of “crash.”

To complete this test with a combustion engine, the reversing procedure whether direct reversing or by clutch and declutch requires the engine to start or quickly climb above idle while overcoming the forward motion of the vessel and the propeller dynamics associated with that movement. Prior to the regulations under discussion being in effect, large amounts of fuel were “dumped” into the en- gines to allow them to produce enough power to overcome that inertia. That “fuel dump” is no longer allowed and as a result we witnessed a new de? nition of “crash.”

Our ? rst trials resulted in multiple engine stalls and failures. With idle speed and clutch-timing adjustments, the stall was overcome. The next set of trials resulted in a “crash” period extending ? ve minutes before an astern bell was answered and a Captain who quickly and loudly of- fered his opinion. Three trials later, that period was reduced to roughly two minutes by continued discussions with the clutch manufacturer and increasing the engine starting rpm to the maximum allowable limit. In the wheelhouse and as the throttles were pulled back to simulate the emergency crash astern; suf? ce it to say, it was a long two minutes.

We have, over time, witnessed purchase, installation and now trials in both foreign and domestic construction.

From our experience, expect to see continued adjustments as these regulations take effect and the associated propul- sion power moves into operation. The decision to comply is not an easy one.

Marine Technologies, previously served as the

Cooperative Program under the Maritime

Administration and the USDOT from 2003 until 2008. A past Vice President of the Connecticut Maritime

Association, he is a contributing writer for MarineNews. A graduate of the Massachusetts Maritime Academy, Kunkel sailed as a licensed engineer and continued his career in ship construc- tion at NASSCO and Hyundai Heavy Industries, among oth- ers. He is a senior member of the Special Committee on Ship

Operation with ABS and an elected member of the NCB.