Repowering With a Purpose

When the owners of the fishing pollock trawler, Great Pacific decided they needed to purchase a new main engine to replace their MAN B&W Alpha 10V23L-VO they took a hard look at all the engine manufacturers currently on the market that could support their needs. “Our goal was to find an engine that offers superior fuel and lube oil consumption; that had its EPA Tier III Certification and had domestic parts and service.” When the investigation was over and the dust cleared, Alaska Boat Company was the proud owner of a 6DZC from Anglo Belgian Corporation Diesel (ABC Diesel), the first time this engine was used to power a commercial fishing boat in the United States.

The Basics on ABC
“To be honest, I had never heard of ABC” said Chris Kline, General Manager of Alaska Boat Company, the owner the Great Pacific. “But once you start hearing of an all mechanical, EPA Tier III engine that out performs the competition … you start listening a little harder and you want to learn more about the option.”
Kline listened and learned and found out that Anglo Belgian Corporation has been manufacturing diesel engines since 1912 and is headquartered in Gent, Belgium. The company has a century of engine-building expertise, founded in 1912 by a group of Belgian entrepreneurs soon after building the first licensed Rudolf Diesel engine. With a reputation of building robust and simple engines, with low fuel and lubricating oil consumption it’s perhaps no surprise ABC has to its credit more than 1,750 installations worldwide. The DZC engine that is installed in the Great Pacific can run on diesel, heavy fuel or bio fuels; as well as a dual fuel execution. Available in a 6 and 8-cylinder inline or 12 and 16-cylinder vee configuration, operating from 600 rpm to 1,000 rpm, the engine produces up to 5,435hp.  All engines are individually tested at the factory with option of the presence of the client and possibility of all major classifications.
“The beautiful thing about working on an ABC engine is that everything is mechanical, which is ideal for a fishing vessel and its crew,” stated Justin Roeser, Operations Manager for Seattle-based Transmarine Propulsion Systems, Inc. (TMPS), ABC Diesel’s North American representative. “Everything is controlled by a mechanical component, which in the very near future this will no longer exist; wrenches will be swapped with laptops.”

Engine Reliability a Must for Bering Sea Operations
The Great Pacific is one of six boats in a fleet that is managed by the Alaska Boat Company. The Great Pacific predominately fishes for Pollock in the Bering Sea and delivers her catch to Dutch Harbor. Fishing seasons are split into A and B seasons. Fishing trips average from 2 to 4 days. When fishing is good, especially in ‘A’ season when the roe is ripe, it is imperative to turn the vessel around quickly to take advantage of these conditions. And, because the Great Pacific sails with a crew of just 5, simplicity of operation and a high degree of reliability from the engineroom is imperitive.
The Great Pacific is an all welded steel hull with a raked bow with moderate flare. The hull is single chined with dead rise from the keel outboard. The bottom plating sweeps up to a sloped transom and bulwarks. An eight foot wide stern ramp is on centerline. The main deck has straight shear with camber. There is a full width raised foc’sle forward. An aluminum house is attached to the steel foc’sle deck with explosion bonded DuPont bi-metal connection. An A-frame style mast is forward with a trawl gantry aft.

Foreign Built for Domestic Convenience
TMPS is also ideal for Alaska Boat Company because of its West Coast, Seattle, WA location. TMPS also has a facility in Tampa, Florida and both provide sales, field service and spare parts inventories to meet the urgent demands of customers. This alleviates the headaches and delays that many customers encounter with foreign engine manufacturing. Roeser adds, “We’re supplying foreign engines with better after sales than our domestic competition. Since we have to service various makes of engines every day, we have strategic partnerships with freight forwarders, warehousing on a global level and are used to turning on a dime and solving problems now for our customers worldwide.”
In this case, the installation was completed at the beginning of February at the owner’s own yard and the entire alongside procedure took just two days, start to finish. Today, the vessel is already back in service, having left for Alaska on February 8th.
North American orders for the DZC engine are increasing with a power plant order of four 6-cylinder DZC engines and an additional two commercial vessels ordering a (6) six cylinder and an (8) eight cylinder DZC engine for their re-power, plus a new build with two (2) 12 cylinders on order which just completed testing at the factory. Due to a high degree of customization, the DZC engine line is fast becoming an attractive option for repowering projects.

(As published in the March 2014 edition of Marine News - www.marinelink.com) 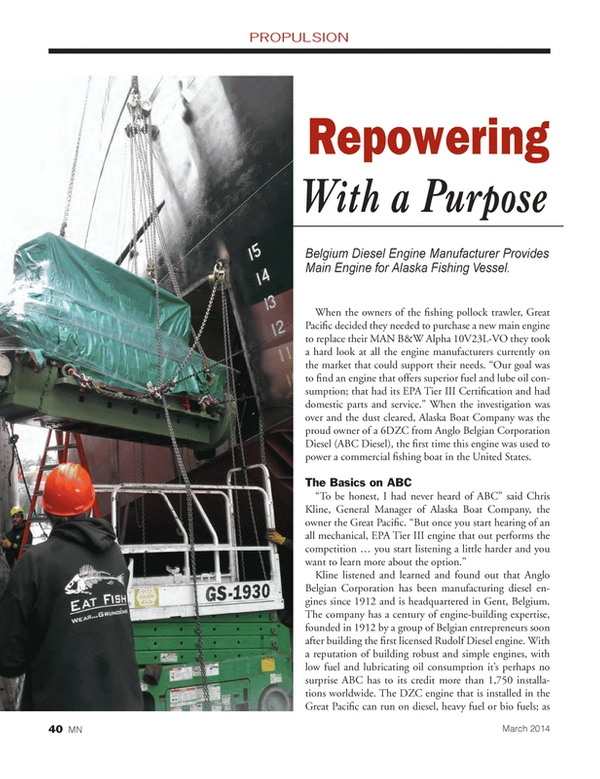 Read Repowering With a Purpose in Pdf, Flash or Html5 edition of March 2014 Marine News

Other stories from March 2014 issue